“Free Aztlan is almost free,” said Joey Villarreal, media producer and survivor of the “torture cell” at Pelican Bay’s SHU. Unjustly charged and incarcerated on Aug. 2, Villarreal has since been held in Santa Clara County Jail. He was arrested at the San Jose Flea Market after attempting to protect a friend who needed medical attention. Thanks to an organized effort by family, friends and community organizations, Joey has finally been released on bail.

“Joey is an excellent writer and author. He has established his own publishing press. Joey is active in his community, works with youth and nourishes his spirit by being an Aztec dancer. He is a man on a quest to better the quality of his life; he is not a man looking to be in prison,” said Lupe Lujan, a programmer at The Latin Collective on KKUP 91.5FM.

POOR Magazine and Homefulness co-founder Tiny Gray-Garcia noted: “These kinds of racist, classist laws – such as the gang enhancement and three strikes law, which were used against Joey – unjustly target and predate on innocent poor peoples of color like Joey all the time, even in a global pandemic.”

“Joey is a powerful advocate for Chican@s, a community that is being ravaged by COVID and economic hardship during the pandemic. His advocacy for the rights of current and formerly incarcerated community members has touched the lives of so many through his books and radio show,” said Rebecca Ruiz of the Idriss Stelley Foundation.

“The absence of this brother has made an impact on so many lives because he wants better for the people, the children and our future.”

The DA’s office received hundreds of letters, emails and phone calls demanding his release, yet they continued to hold him until Sept. 24.

Gera Gonzales, youth advocate with Aztlan for Youth Foundation and radio producer with Free Aztlan PNN-KEXU 96.1FM, remarked, “The absence of this brother has made an impact on so many lives because he wants better for the people, the children and our future.”

Brown Beret Al Osorio joined the campaign, stating: “Joey Villareal has been a solid role model and an example to the local youth as someone who has overcome adversity and is now giving back to the community he loves.”

POOR Magazine, Silicon Valley DeBug, the Oakland Chapter of the Brown Berets and hundreds of other community members were able to raise his bail by promoting a fundraising campaign for his legal fees.

More on this story can be found at POOR Magazine and Prensa POBRE at www.poormagazine.org. 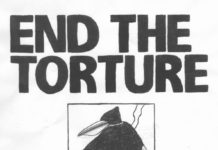