San Francisco – Treasurer José Cisneros and Public Defender Mano Raju applaud Gov. Gavin Newsom’s passage of The Families Over Fees Act through signing Assembly Bill 1869, the first in the nation to end the harmful and costly collection of 23 administrative fees imposed against people in the criminal legal system. The bill takes statewide reforms first enacted in San Francisco to eliminate “high pain, low gain” fees that pile debt onto people who cannot pay it, drive people deeper into poverty and create barriers to their successful reentry.

“Charging very poor people fees to cover our government’s administrative costs makes no fiscal sense. These Californians have already paid their debt to society, and by eliminating this debt burden, we are providing vulnerable communities with a real second chance,” said Treasurer José Cisneros, who founded The Financial Justice Project to assess and reform how fines and fees impact San Francisco’s low-income residents and communities of color.

San Francisco’s successful experience as the first city and county to end the burden of administrative fees in the criminal-legal system has galvanized a national movement for fine and fee justice. Last May, San Francisco helped launch Cities and Counties for Fine and Fee Justice, made up of localities committed to enact bold reforms to ensure their fines, fees and tickets do not place a disproportionate burden on low-income residents and people of color. And this week, former New York City Mayor Michael Bloomberg recently raised more than $16 million to pay the court fines and fees of 32,000 formerly incarcerated Floridians so that they can vote in the November 2020 election.

“Our office has been pushing for the elimination of fees locally and statewide for many years now, because for too long, we have watched our clients and their families struggle with debt that they are unable to pay,” said San Francisco Public Defender Mano Raju. “For justice-involved people who already have the cards stacked against them in so many ways, financial penalties create an even higher barrier to their future success.

When individuals exit jail or the criminal justice system, they are often charged thousands of dollars in administrative fees that aim to recoup costs for the courts and government. The Policy Advocacy Clinic at Berkeley Law estimates that AB 1869 will relieve Californians of over $16 billion in outstanding criminal fee debt, the vast majority of which is uncollectible since people exiting the criminal justice system cannot afford to pay. Studies have shown that some California counties spend more to collect these fees than they bring in.

“For justice-involved people who already have the cards stacked against them in so many ways, financial penalties create an even higher barrier to their future success.”

In 2018, San Francisco became the first in the country to eliminate local criminal justice fees and lifted $32 million in debt off of 21,000 residents. The ordinance to eliminate fees was authored by London Breed when she was president of the San Francisco Board of Supervisors.

The San Francisco Public Defender and The San Francisco Financial Justice Project worked with a coalition of community groups, Mayor Breed, and other city leaders, including the district attorney, adult probation chief and the sheriff, to propel the reforms. Alameda, Contra Costa and Los Angeles Counties followed in eliminating fees, lifting a formidable financial burden off of people and easing their re-entry.

“San Francisco has committed to get rid of these fees to give people a fighting chance to succeed,” said San Francisco Mayor London Breed. “We should actively help people get their lives back on track after they have paid their debt to society. San Francisco is about removing fees that act as barriers to opportunity, not imposing them. For too long, we have extracted these fees from Black and Brown families who are struggling to get by. I strongly urge other states and localities to join our movement for fine and fee justice.”

In 2019, Mayor Breed, The Financial Justice Project and the San Francisco Public Defender’s Office became co-sponsors of SB 144, California State Sen. Holly Mitchell’s legislation, known as the Families Over Fees Act. The San Francisco leaders joined with the Debt Free Justice California coalition to advance the legislation which was ultimately added to the budget process and reintroduced as AB 1869.

AB 1869 will go into effect on July 1, 2021. The bill is expected to have both immediate and long-term positive effects on the well-being of vulnerable families throughout California. Families will be able to spend more on goods and services, which will stimulate the economy and help stabilize households who have been particularly hard hit by the economic downturn of the pandemic. It will also relieve them of the debts that have traditionally hurt their financial futures. 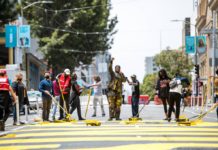 Halt the mean Prop 19 now! Stop the attack on Black and Brown wealth