The students of South San Francisco High School have chosen to remember and honor one of their own: my dear nephew Derrick Gaines. Though many of those organizing this event were only 8 or 9 years old when Derrick was executed by Joshua Cabillo, SSFPD – since hired by SFPD – I am absolutely blown away by these youngsters and their kindness even as they battle city leaders for change.

This group photo has Derrick’s 12-year-old brother, Michael, in the back row. He lost his only sibling. We had approximately 30 people attend the memorial, including the SSFUSD school superintendent, several high school teachers from the South San Francisco high schools, members of the African American Parents Committee of the South San Francisco school district – of which I am a member – who surprised us with the black sweatshirts seen in the photo, friends of Derrick who still grieve his loss, activists from San Francisco and, of course, family.

The crux of the problem is that the DA who ended up exonerating these killer cops paved the way for them to be hired by other police departments just as with Cabillo. Without DAs being independent of police departments and of funding from police unions for their elections, we are always going to have biased investigations of these police killings.

Cabillo was quoted as saying that he had always hoped to work for the SFPD because it is prestigious to work for a big city police department. Some of the officers in SSFPD told me that they were glad to see him go, telling me that I should sue. That’s interesting coming from police officers. Unfortunately, with San Mateo DA Steve Wagstaffe ignoring Claudia Li’s statement and going with Cabillo’s account of what happened, he shut the door on further action by the South San Francisco Police Department.

In the DA’s investigative report, it was stated that when Cabillo was stressed about what he had done, then Police Chief Mike Massoni put his arms around Cabillo, saying, “You did well.” This is the language of the gang in blue. They comfort and protect their members and think nothing of the victims and the larger repercussions of these executions throughout the community of teachers, friends, parents and family who cared about the victims.

I have not ever received one word from the South San Francisco City Council – some members of which have been in office for decades. In fact, as members of the organization Change SSF have challenged the police chief and SSF city leaders with their demands, dedicated these challenges to the memory of Derrick Gaines – whom they describe as being “murdered” – SSF city leaders have pushed back, calling this execution “justified.”

It’s time for new leadership in these small communities on the Peninsula and all over California if we want to see real change. Mayor Rich Garbarino, in office for decades, created a Commission on Racial and Social Equity in response to the demands of Change SSF, but the jury is still out on whether this commission is going to really listen to what the youth of this city are saying.

I never thought that I would see a challenge to the leadership of this city. I am so inspired and encouraged by Change SSF and I want to support them in any way I can. Members of this coalition were the ones who wanted to organize this #DerrickGainesMemorial2020. The rallies in South San Francisco in June and July 2020 were truly amazing – how I wish we had had that kind of response in 2012 when Cabillo brutally executed Derrick.

Dolores Piper is the great aunt of Derrick Gaines, who was executed June 5, 2012, by Joshua Cabillo, badge no. 1014, who has since been hired by SFPD. Dolores is a member of the anti-bias working group set up to write new anti-bias policing policy for SFPD, a founding member of San Franciscans for Police Accountability and supporter of Change SSF – an organization providing relief to families who have lost their loved ones to police aggression and brutality. Visit Change SSF at changessf.org/ and contact Dolores at dolorespiper@sbcglobal.net.

Greetings to all who came to remember and celebrate Derrick Gaines today. It is truly beautiful that even after eight years since Derrick’s passing, his life is remembered and today we get a chance to wish him a happy birthday.

I did not know Derrick. But I’ve learned throughout these years that his life mattered to many and continues to matter. Through stories and memories, I believe knowing Derrick would have been a blessing and joy.

If my witness statements had been taken into real account and justice were served after this incident, Officer Cabillo would not continue to be employed as a police officer.

The truth about Derrick must be told so we can heal and fight back as a community for justice and police accountability.

Officer Joshua Cabillo was not held accountable for the death of 15-year-old Derrick Gaines. I was a witness the night of Derrick’s shooting. Officer Cabillo lied about Derrick reaching for a gun, a gun which was at an unreachable distance, in order to justify the shooting.

If my witness statements had been taken into real account and justice were served after this incident, Officer Cabillo would not continue to be employed as a police officer. He would have been prosecuted for the obstruction of justice and his murder of Derrick.

The San Mateo District Attorney’s Office chose to believe Cabillo’s story over my witness account, presenting a false representation of the incident to the public to justify the shooting. City officials today continue to perpetuate a lie around the death, a lie that we must shine truth upon.

I have seen firsthand how truth and witness accounts from neutral parties regarding these police-involved incidents can be swept away and ignored. I think that an elected Civilian Review Board must exist to hold the Department of Justice and police officers accountable.

Since this incident in 2012, I have learned that Cabillo and other officers violently brutalized another young Black man, Travis Hall, with excessive force in 2015. I think that the San Francisco DA, Police Chief Bill Scott and other city police chiefs need to seriously look at whether Officer Cabillo should remain a police officer.

I could not be here physically today, but thank you for allowing my words to be shared. I thank Dolores Piper, Derrick’s aunt, in the highest regard for being the strong woman she is, fighting for Derrick, loving him and giving us strength to fight on. Thank you all for bringing light on this day to the family and community. 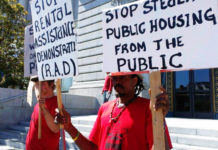