Police, prison guards and their unions and affiliates are at it again. They’re hoping to scare the public – you – into voting yes on an initiative that will significantly increase prison populations throughout California, scaling back years of hard fought reform measures like Propositions 36, 47 and 57 that had reduced overcrowding and directed taxpayer monies to healthcare, education and the communities – and put those funds right back into their pockets.

They’ve always been comfortable utilizing scare tactics and it has been relatively effective. This time, however, they’ve included additional tactics in an attempt to screw the people: 1) sleight of hand, 2) you don’t know what you want and 3) silence.

Why then, is the DNA expansion policy being presented to the public under Proposition 20? Simply put, to fool you. They want you to believe that by violating people’s right to privacy by requiring them to provide DNA samples every time they encounter a police officer is somehow going to make us safer. It’s not. It’s a lie. It’s also oppressive.

You don’t know what you want

During the last decade, the people of California have proactively scaled back draconian sentencing laws. Proposition 36 permitted resentencing of prisoners sentenced to life in prison for offenses that were neither serious or violent. Proposition 47 authorizes judges to reduce nonviolent offenses like simple drug possession or theft related offenses that did not exceed $950 to be treated as misdemeanors. Proposition 57 mandated increased credit earning for prisoners – excluding condemned prisoners or prisoners sentenced to life without the possibility of parole.

Prisoners are also eligible for early parole after serving the full term of their primary offense – if they were not convicted of a violent offense. It also amended the California Constitution by adding Sections 32(a)(1) and 32(a)(1)(A) to Article 1, Declaration of Rights. These initiatives were instrumental in reducing the prison populations that resulted in significant savings.

Certain special interest groups, however, feel you don’t know what you want. Apparently, the people of California simply did not know what they were doing when they approved said propositions, amended the Constitution, or demanded that nonviolent prisoners be released early, diverting their tax dollars to the educational and healthcare sectors.

Thousands of unconstitutional convictions and sentences will stand because correcting Milton’s sentence will disrupt job security for prison guards and other state actors.

These very same groups feel you must now be tricked into funneling billions of dollars back into the prison system. Not education, not rehabilitative programs, not healthcare, not homelessness – but prisons and prison guard salaries because, after all, that’s what’s best for you.

Everybody wants cold cases to be solved and DNA evidence is a wonderful tool not only to link bad actors to past crimes, but also to exonerate those wrongly convicted. But again, those convicted of felonies, including those housed in state prisons, are already required to provide their DNA. Expansion of the DNA Collection Program to involve people arrested for mere misdemeanor infractions is outrageous and overreaching.

The special interest groups are hoping the lack of attention on Proposition 20 aids them in destroying all we’ve worked for. And if we’re not vigilant, it will.

Although the prison population had been reduced, there are thousands of brothers and sisters, Black and Brown, currently incarcerated for nonviolent offenses. In fact, the California Department of Corrections and Rehabilitation (CDCR) has refused to begin paroling nonviolent prisoners sentenced under the Three Strikes Law pursuant to Proposition 57 until after Nov. 3. They want to see if their trick is successful.

Many of the men sentenced under the Three Strikes Law have been incarcerated and away from their families for 25+ years. Family members had passed away, abandoned them, or otherwise lost all contact with them. These brothers and sisters are good people and alone – but their lives have been completely snuffed out, all for the sake of job security for prison guards.

For example, the men indicated below have NEVER been accused, arrested, charged or convicted for murder, rape, any sex-related offense, arson, great bodily injury to another, physically injuring another, or any other heinous offense – but have been sentenced as though they killed someone:

– William Milton, P38650, CTF, P.O. Box 689, Soledad, CA 93960-0689, was sentenced to 30 years to life in prison for allegedly taking a $20 bill from a man’s pocket in 1998, a violation of Penal Code §212.5(c), robbery. The state also accused Milton of committing two Illinois robberies in 1987. The court found aggravating facts in Milton’s priors and determined them to be serious felonies for purposes of the Three Strikes Law.

After years of challenges and rulings by the United States Supreme Court, the Second Appellate District determined that Milton’s priors were NOT serious or violent but DECLINED to grant Milton relief because it would be “too disruptive” (i.e., “granting Milton’s petition would make thousands of cases vulnerable to attack.”). See In re William Milton (2019) 42 Cal.App.5th 977 [256 Cal.Rptr.3d 172].

In other words, thousands of unconstitutional convictions and sentences will stand because correcting Milton’s sentence will disrupt job security for prison guards and other state actors. Milton is literally serving a sentence the state can no longer impose upon him today. The California Supreme Court granted review (S259954). A final decision is due by early 2021.

– Corey Lamar Smith, G44282, CTF, P.O. Box 689, Soledad, CA 93960-0689, was sentenced to 27 years to life under the Three Strikes Law for a daytime burglary. Smith wandered into an unlocked home under the influence and disorientated. Even the homeowner testified Smith was harmless and did NOT pose a threat to her. But because Smith has two felonies on his record, he was sentenced to life.

There are many more instances like this. These brothers are NOT violent and had paid their debts to society ten-fold. Write to the aforementioned brothers or any other nonviolent Three Striker. You’ll see they aren’t the hardened criminals those special interest groups made them out to be. They need your help. We humbly ask the people to make their voices heard once more. Please vote no on Proposition 20.

PHERM is an organization of prisoners at the California Training Facility at Soledad. To reach them, email editor@sfbayview.com. 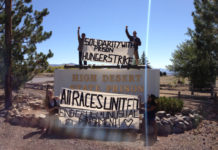 I believe trying children as adults is unconstitutional

LWOP: Death sentence by another name – Vote No on 34