On April 18, 2020, former San Leandro police officer Jason Fletcher first tased and then shot Steven Taylor in the chest at a San Leandro Walmart. Fletcher, a white officer who was 49 years old at the time of the murder, was only in the Walmart for approximately 40 seconds before he pulled his service revolver and shot 33-year-old Steven in the chest, killing him in cold blood.

Steven Taylor is the grandson of Addie Kitchen, affectionately known as “Grandma Addie” to local activists, freedom fighters and close friends and family. Addie Kitchen is a remarkable and intelligent Black woman who has made it her business to fight hard for justice for her grandson Steven.

Addie Kitchen raised Steven and his two brothers in San Leandro while she worked as an employee for the California Department of Corrections and Rehabilitation. Grandma Addie believes in truth and justice. She also believes in the strength and power of Black people. Addie Kitchen has an unshakable faith in her Lord and Savior Jesus Christ. Grandma Addie devoted 30 years to the state of California, so you can imagine how hurtful it is for her to grapple with the loss of her grandson at the hands of an officer who took an oath to protect and serve and not to maim and kill.

Once I began researching Steven’s death and reviewed the video of the murder, I discovered that Jason Fletcher made absolutely no attempt to de-escalate the situation. That in itself is a serious problem when we consider the current California law known as AB 392.

AB 392 was signed into law by Gov. Gavin Newsom on Aug. 19, 2019. It took effect in January 2020. Under this new law, lethal force by a “peace officer” is only justifiable “when necessary in defense of human life.” Deadly force like that used by Jason Fletcher against Steven Taylor is justified only when the officer reasonably believes, based on the totality of the circumstances, that deadly force is necessary for one of two reasons:

AB 392 states clearly that police officers are duty bound to deescalate a situation before using deadly force. As I began to communicate with Addie Kitchen, I discovered that she possessed a keen analytical mind and that she was determined to hold the police department of San Leandro accountable for the death of her grandson. A fire is burning inside this woman.

The video depicts former Officer Fletcher first tasing and then shooting Steven Taylor only 40 seconds after entering the store. Also shocking and frustrating to me were the actions and inactions of another San Leandro officer, Stefan Overton. Rather than immediately rendering first aid and helping to stop the blood that was gushing out of Steven’s chest, Overton can be seen approaching Steven, and then cuffing his hands behind his back, totally ignoring the needs of the dying Black man on the floor.

Grandma Addie still hasn’t viewed this video. I am sure our mothers and grandmothers who are reading this piece can understand her pain.

The San Leandro Police Department has made a point of not acknowledging the life nor the humanity of Steven Taylor. San Leandro Chief of Police Jeff Tudor has repeatedly said that he is going to allow the legal system to take its “natural course.” Nevertheless, there have been numerous procedural errors and actions which clearly show that the San Leandro PD has no respect for Steven Taylor or his family.

On Dec. 8, 2020, former San Leandro Police Officer Jason Fletcher is scheduled to enter a plea in court for his crime. Stand in strong solidarity with Grandma Addie as she fights for justice for her grandson Steven.

Addie Kitchen told me that the police department made no attempt to notify her that her grandson had been killed by a police officer. In fact, Grandma Addie said that Mykayla, the mother of Steven’s child, contacted every hospital in the Bay Area as well as the Coroner’s Office to confirm Steven’s death.

Not only did the police department refuse to acknowledge Steven’s death, they have still not returned any of his personal belongings. Grandma Addie said: “Steven had a backpack that he wore everywhere he went, he had it on when he was killed and I want that backpack because it was his. They haven’t returned any of his things and it has been months.”

Addie Kitchen agreed that Steven’s case is another in a long line of examples where the police kill a young Black man with no remorse nor recognition of his humanity. Working diligently to see that justice is served in the murder of her grandson, Addie has been an outspoken opponent of police violence against citizens and she has spoken to every person in the State of California she could reach who may have some ability to help her seek justice for Steven.

It is noteworthy that California Attorney General Xavier Becerra, a Democrat, refused to open an investigation into this murder of another young Black man by a police officer in California. Remember, AB 392, requiring de-escalation, is the law!

The family of Steven Taylor is represented by a lawyer who I am very familiar with and who I admire very much. Civil rights attorney S. Lee Merritt is known as “the people’s lawyer.” He has represented numerous families who have had loved ones either killed or abused and mistreated by law enforcement. He specializes in racial injustice cases and has made a name for himself in the state of Texas as a person to be respected when police are accused of taking an innocent life.

Some of our SF Bay View readers may remember the article that I wrote about Atatiana Jefferson back in February of 2020. Atatiana was a young Black woman who was in her house in Fort Worth, Texas, playing video games with her nephew when a white Fort Worth police officer named Aaron Dean shot and killed our beautiful sister. S. Lee Merritt represented the Jefferson family as they fought for justice for Atatiana.

Attorney S. Lee Merritt got a front seat view of the horrible racist culture that exists within the criminal justice system in Texas when law enforcement, judges and government officials all colluded to get this amazing attorney disbarred. We hear the phrase, “No weapon formed against me shall prosper,” and that phrase became real for Lee Merritt when 16 counts of practicing law without a license in Texas were dismissed.

This was an attempt by the state of Texas to intimidate Lee Merritt and sabotage his work. Lee Merritt is one of the most fearless and courageous attorneys in the United States and he never did back down when those bigots and red necks in Texas tried to run him out the state because he believes that BLACK LIVES MATTER.

Addie Kitchen was introduced to Merritt by her niece who lives in Richmond, Virginia. As grandma Addie began to do her research on Lee Merritt, she saw some surprising coincidences. First, Stacy Sylvester Lee Merritt was raised by his grandmother in Compton, California. Addie Kitchen is from Compton and raised her grandson Steven and his two brothers.

Addie continued to do her research and she liked what she found. Here was a fairly young and successful Black lawyer who was not afraid to stand up to racist white folks. Addie Kitchen told me: “I wanted a Black lawyer. Someone who personally understands what young Black males go through in this country.”

In light of San Francisco DA Chesa Boudin’s recent announcement of murder charges filed against police officer Christopher Samayoa in a San Francisco case, we are hopeful that there will be justice for Steven Taylor. Alameda County DA Nancy O’Malley has gone on the record to say that Steven Taylor was not posing a threat when officer Jason Fletcher made the conscious choice to shoot Steven in the chest.

Furthermore, I want all of you to think about the inhumane and barbaric behavior of San Leandro Police Officer Stefan Overton. I studied the video. Once Steven was tased, he was wobbly and disoriented, stumbling forward in a vulnerable state. Not only was he shot in the chest, he was left to bleed out on the floor by both Overton and Fletcher.

Addie Kitchen and many community members have called for the firing of Overton and for him, along with Fletcher, to be charged in the murder of Steven Taylor.

On Dec. 8, 2020, former San Leandro Police Officer Jason Fletcher is scheduled to enter a plea in court for his crime. The San Francisco Bay View National Black Newspaper asks that every person reading this article stand in strong solidarity with Grandma Addie as she fights for justice for her grandson Steven. There is most certainly power in the will of the people.

Steven Taylor was a gifted rapper and had many musical gifts and talents. He was a father, a brother and a loving grandson. Perhaps he suffered from mental illness, but does that justify him being shot down and being left to die on a Walmart store floor?

Addie Kitchen told me that all Jason Fletcher had to do was take some time and talk to Steven, but from the evidence Fletcher had it on his mind to shoot and kill a young Black man the minute he stepped foot into the Walmart store.

AB 392 speaks of de-escalation, but I don’t think that there is a police officer in the United States who even knows how to spell the word. It seems to have become a national passtime to murder young Black men with no remorse. I’m tired of not seeing justice rendered in these cases; aren’t you?

Dec. 8 is only a few days away. Together we can make a change.

Dare to struggle, dare to win! All Power to the People!

Bay View Editor Malik Washington can be reached at Malik@sfbayview.com. Contact him whenever you see news happening. Please visit our website, sfbayview.com, read and share the knowledge, wisdom and understanding and Black culture contained in our one of a kind national Black newspaper. 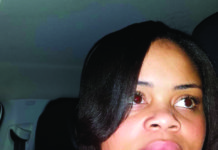