All street life to a certain extent starts fair

Sometimes with a spiritual memory even

Predawn soul-clap/ your father dying even

My sensitivities to landfill districting and

revolutionary violence that chose its own protagonists

or muted stage of genius

The garbage is growing voices

Underpasses in their pockets

or decent bid on the Panther name

Or metaphor for relaxing next to a person

Who is relaxing next to a gun

I stare at my father for a few seconds

Then return to my upbringing

Return to the souls of Ohio Black folks

Revolution is damn near pagan at this point

You know what the clown wants? The respect of the ant.

Wants to interpret pain only

wants to pull a .38 out of a begging bowl

wants me to hurt my hand on this pen

My only change of clothes prosecuted

The government has finally learned how to write poems

that make up a parable

do white men actually even have leaders?

all white people are white men

A rat pictures a river

Can almost taste the racial divide

Knows who in this good book will fly

all I do is practice, Lord

I have decided not to talk out of anger ever again

We passed each other cigarettes and watched cops win

Harlem of the West due a true universe

“I will always remember you in fancy clothes,” my wife said

so here I sit… twisting in silk ideation

My rifle made of post-bellum tar

My targets made of an honest language

Writing among the lesser-respected wolves

in a Chicago briefing, a white sergeant saying, “blank slate for all of us after this Black organizer is dead.”

bay of nothing, Lord

and the last of the inherited asthma

children given white dolls to play with and fear

I can hear hate

And call tools by people names

And name people dead to themselves

no one getting naturalized except federal agents soon

carving the equator into throats soon

I’m sorry to make you relive all of this, Lord

minstrel scripts shoveled into the walls by their elders

my children sharpening quarters on the city’s edge

For these gangsters, I do the same

every now and then, we take a nervous look east

do you ever spiral, Lord?

has the gang-age betrayed us?

be patient with my poems, Lord

there is a point to crime…

There has to be if race traitors come with it

Lord, is that my revolver in your hand?

Better presidents than these have yawned at cages

Have called us holy slaves

Baby, I don’t have money for food

I have no present moment at all

Born in San Francisco, Tongo Eisen-Martin is a movement worker, educator and poet who has organized against mass incarceration and extra-judicial killing of Black people throughout the U.S. He has educated in detention centers from New York’s Rikers Island to California’s San Quentin Prison. Tongo Eisen-Martin can be found on IG @_tongogara_. 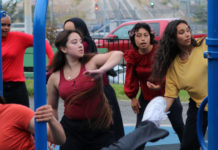