Adachi Project film shows the inside story of virus outbreaks – and the GEO Group’s failure to contain them.

Before I met Malik Washington, I didn’t know that a private prison company was running a halfway house in the Tenderloin. I didn’t know that a multibillion-dollar multinational company that runs prisons for ICE was operating in San Francisco, under contract to both the feds and the state.

I didn’t know that GEO Group, a company that makes money based on the number of people incarcerated, had taken over what was once was the historic Compton’s Cafeteria.

I didn’t know what a mess the place was.

But the Public Defender’s Office has been watching this situation for months and has just released a short documentary on the problems at 111 Taylor. It’s devastating.

The documentary, produced by The Adachi Project, follows an inmate at the center last spring when, he says, 12 inmates tested positive for COVID.

The inmate, who is (for obvious reasons) not identified, says his parole officer suggested he live at 111 Taylor because it would be a good transition from prison; “he said think of it as your own apartment,” the narrator notes.

“I guess they figure if you’re not used to freedom, they don’t have to give it to you.”

But it wasn’t like an apartment, he says: The ability to leave the facility is limited, meals are served at only one time (and everyone eats together) and there’s little privacy. “I guess they figure if you’re not used to freedom, they don’t have to give it to you,” he says.

At first, he says, residents were told they didn’t need masks unless they were already infected. Even after residents tested positive, there was no social distancing in the day room: “I am close enough to touch the person next to me, and I am way in the corner,” he says.

Information about infections was limited, the inmate says in the movie. One day, he noticed the EMTs out front putting someone in an ambulance. “They don’t tell you anything. You look around and see who’s missing.”

The narrator shot video from his phone during the days when there were reports of positive tests but little isolation. “Then they crammed us into too little spaces because they kicked us out of the day room.” He lived in a single room with six beds and one bathroom.

A few days later, he says, the staff was walking around with special white suits. One positive, two positives, four, then seven … then 12 in quarantine rooms.

“At that point it’s obviously spreading,” he says. “I’m 64 years old, African American, high blood pressure, all things that I’ve read are making me more susceptible to the virus. He said he was willing to risk a parole violation to get outside and save his life.

“The conditions at 111 Taylor are extremely troubling, and this film is just a glimpse into what is a larger, ongoing pattern of abusive practices and crises created by private prison corporations like GEO Group,” said San Francisco Public Defender Mano Raju. “It also affirms the recent complaint by Mr. Keith “Malik” Washington about conditions at 111 Taylor and emphasizes our longstanding position that state and federal governments need to stop awarding lucrative contracts to private prison corporations, as time and time again we witness how they fail to protect the safety and wellbeing of the people in their custody and in the community.”

Sup. Matt Haney, who represents the district where the Taylor Center is situated, told me:

“There’s a reason why so many around the country are calling to end all contracts with private prison providers. The conditions inside that facility show a disregard for the health, safety and well-being of the people who live there. There clearly needs to be more oversight from the federal government and they should reconsider this contract altogether.”

The Public Defender’s Office, Even/Odd and Compound created The Adachi Project in memory of longtime PD Jeff Adachi to shed light on criminal and social justice issues through storytelling.

The COVID problems at 111 Taylor were still going on just a month ago, when I got a text from Washington, the editor of San Francisco Bay View and a resident of the Taylor Center, telling me there was an outbreak.

After I began pursuing the story, Washington had his cell phone confiscated and faced disciplinary action for contacting me. He has since filed suit challenging those actions.

Washington has appealed repeatedly for his release from the Taylor Center. He has an apartment in Bayview, near the newspaper office (he is allowed out during the day to work). He also has a job with the United Council of Human Services as case manager with the local homeless population. “He’s definitely made a difference in their lives,” Gwendolyn Westbrook, CEO of the program, told me. “I’m so happy he took the job.”

She said she doesn’t understand why he can’t be released to home confinement for the duration of his sentence, which ends in May. “I don’t know why he has to stay in there,” she said.

Tim Redmond has been a political and investigative reporter in San Francisco for more than 30 years. He spent much of that time as executive editor of the Bay Guardian. He is the founder of 48hills, where this story first appeared. It is reprinted with permission. 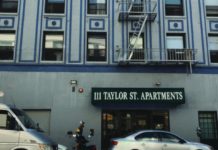 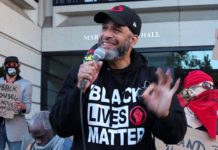