Civil rights attorney Abre’ Conner and the Moms Clean Air Force explain why environmental protections are important to Black History Month in the Huffington Post: “If Black history is indeed American history, the importance of the Environmental Protection Agency as it relates to Black people should resonate to all people.”

The first major study of segregation and pollution in America was conducted in 1987 by the Commission for Racial Justice. “Toxic Wastes and Race in the United States” showed race is the major variable in where toxic waste facilities are sited. People of color comprise 57 percent of residents living within a two-mile radius of hazardous waste sites and 60 percent of residents living near polluting industries.

The national mapping conducted by the Commission for Racial Justice on file with the National Research Council identifies southeast San Francisco as one of the worst regions in the nation.

In 1992, civil rights icon Congressman John Lewis introduced the Environmental Justice Act in environmental decision making – the federal mandate that environmental laws and policies should not discriminate on the basis of race, color, national origin or income.

The father of environmental justice

The Environmental Justice Movement emerged “like a phoenix” from the embers of a quiescent civil rights movement in 1978, when attorney Linda Bullard recruited her husband Dr. Robert Bullard as an expert witness in the trailblazing civil rights case Bean v. Southwestern Waste Management. The injunction charged racial discrimination by the city of Houston’s decision to site a garbage dump in an affluent African American suburb.

In a 2018 Guardian interview, Bullard defined environmental justice as “the right to live, work and play in a clean environment” and identified the roots of environmental injustice as racial discrimination in housing, land use planning and zoning.

“Lines of demarcation on race and class are used to confine and segregate individuals and communities. This historical pattern stands to this day.” Read the full interview: https://www.theguardian.com/commentisfree/2018/dec/20/robert-bullard-interview-environmental-justice-civil-rights-movement#:~:text=Robert%20Bullard%20is%20known,environmental%20racism%20in%20the%201980s.

The national mapping conducted by the Commission for Racial Justice on file with the National Research Council identifies southeast San Francisco as one of the worst regions in the nation.

The face of environmental justice at the EPA

The Duke Energy Corp. coal-fired power plants located at the fenceline of Goldsboro, N.C., were shuttered in 2012. EPA chief nominee Michael Regan is credited with working across the aisle to secure a multibillion-dollar settlement to clean up coal waste.

“It’s six miles as the crow flies from the childhood home of Michael Regan to the shuttered coal plant that helped light up the city of 35,000 people. During the 1980s, the plant’s three coal-fired generators were industrial monoliths on the edge of Goldsboro, N.C.

“During that time, Michael Regan, the first Black man nominated to lead the EPA, had his first asthma attack. Regan recalled memories of airway constriction, shallow breathing and the reflexive gasp from a bronchial inhaler growing up in eastern North Carolina. ‘I developed a deep love for the outdoors and our natural resources, but I experienced respiratory issues that required me to use an inhaler on days when pollutants and allergens were especially bad.’” – Climatewire, Dec. 21, 2020

On Tuesday, Feb. 9, 2021, the Senate Environment and Public Works Committee approved the nomination of Regan as EPA administrator in a 14-6 bipartisan vote. Chairman Tom Carper, D-Del., called Regan “the right person to lead the EPA at this time.”

The full Senate must now vote to confirm him. As part of the confirmation process, Regan responded masterfully to 271 questions and received a standing ovation and a big hug from his proud and equally handsome son, Matthew.

If confirmed, the 44-year-old, who currently heads the North Carolina Department of Environmental Quality, would be responsible for setting fuel efficiency standards for American automobiles, reducing emissions from power plants and cleaning up the country’s most polluted sites. Regan is credited with working “across the aisle” with community activists, corporations and Republican legislators.

In a high-profile case, Regan forged a multibillion-dollar settlement over cleanups of coal waste with Duke Energy and established an environmental justice advisory board. 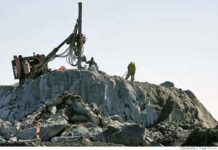