Wanda: Good morning and welcome to Wanda’s Picks, a Black arts and cultural program of the African Sisters Media Network. That was Zion Trinity singing opening prayers to African deity Eshu Legba, a deity who lets us know that we always have choices we are never victims. So, we should definitely pause, take a breath and figure out our options, ‘cause they always exist.

You are the co-founder and executive director of the Oromo Legacy Leadership and Advocacy Association, OLLAA.The website is OLLAA.org. Some things are happening right now that people need to be aware of so that you can tweet and let your legislators know about some urgent events presently in Oromo land and in Ethiopia. So welcome Seena and I’m gonna let you just sort of take it away right now with regards to some current actions and so what’s happening right now that your organization is letting people know about?

Seenaa: Absolutely, thank you so much again, Wanda. My name is Seenaa – you definitely pronounced my last name correct. My first name, my American friends called me “see-nah,” and I got to the point that I call myself “see-nah” until I went to Oromia about three years ago, and I introduced myself, they were like, your name is not “see-nah” and I kind of forgot that it was actually “seh-nah.”

Wanda: No, no, no, so if that’s your name I want to say it right, that’s not too difficult.

Seenaa: So, thank you for that opportunity, Wanda, because it’s not often that we get a chance for the world to hear about the Oromo people. The Oromo people are the indigenous people, one of the very few. Oromo people are compared to the Mayans, with their advancements generations ago, centuries ago. They have their own state. They’re not like five million, they’re over 65 million strong.

The Oromo people are the indigenous people, one of the very few. Oromo people are compared to the Mayans, with their advancements generations ago, centuries ago. They have their own state. They’re not like five million, they’re over 65 million strong.

Oromos have always felt like kind of a second class citizen in Ethiopia, that for us to feel like Ethiopian we must adopt this Amhara culture, Amhara language, Amhara faith – which is orthodox, even though orthodox is not pure Amhara. You have to be orthodox to be a part of the debate. You are not practicing the orthodox if you really don’t speak Amharic.

I remember growing up, you know, like, “I’m too beautiful to be Oromo,” at least to claim Oromo, like how come I don’t claim Amharic language because someone like me should be speaking, so I am a voice for certain people.

Today Ethiopia is zoomed in, everybody’s talking about the war in Tigray, everybody is talking about the genocide that’s happening. But the truth is genocide has been happening on Oromos for years, not just right now, but with the current prime minister and the one even before that – that’s how we end up here, with hundreds of thousands around the world and human refugees.

Just two weeks ago in Yemen, Wanda, over 400 refugees were burned alive by Huti, a Yemen organizational group that did not like the refugees in their land or, for whatever reason, want to make statement to the UN and to the US. They burned them alive, and the government didn’t even send condolences, didn’t even lower a flag. It took the media over 100 days to run [a report]; nobody talked about it. Four hundred people burned alive, they’re protesting for two weeks non-stop, yet nobody’s talking about it.

So, this is OLLAA.org. We provide resources for the community to reach out to their congressmen and call their senators. We educate Americans, not just Oromos, but American people like you, who care about human rights, who feel like Oromos have a right to exist.

Oromos are born, they are from there, they have no other place to go, they are burned in a place like Yemen. There are over 30,000 Oromos in Saudi prisons over eight years because Ethiopia says they don’t have the capacity to take the refugees back. So, if you feel like this issue is a human rights issue, this Oromo issue is just like anybody’s issue. Oromo life matters.

I grew up in the US and so I go out with a lot of African Americans and we’re probably going to talk about my book. I wrote about African Americans seven years ago because of my experience and what I saw. I’m not going to read about that part. I’m going to read about the women, because this is March, but I certainly ask our listeners to check OLLAA.org, follow us on Twitter, follow us on Facebook and let us know if there’s anything that you can do to help us. Let us know if we can come talk to you, to your community.

The Amhara wanted to wipe out the Tigray community to bring people under control. The same group accused of genocide are committing ethnic cleansing in Oromia.

Wanda: Right. President Biden – is he in East Africa presently?

Seenaa: Yes, I’m glad you asked. So, President Biden appointed Sen. Kuhn from Delaware. Sen. Kuhn and President Biden are obviously very close friends to go to Ethiopia to deal with the situation. It’s getting dire by the day; it’s moving towards civil war every single day.

The sad thing is Sen. Kuhn is not talking about genocide, the ethnic cleansing, the targeting of Oromos, 50,000 Oromos in prison, who have been in prison the last nine months. He’s not talking about that – he’s talking about Tigray. Which we do think 100 percent what is happening there is nothing short of genocide.

It’s genocide. The Amhara – it’s a pendulum, they got together, they wanted to wipe out the Tigray community to bring people under control. The same group accused of genocide are lining up, committing ethnic cleansing in Oromia. Sen. Kuhn, who was just in Ethiopia, did not mention anything about Oromia.

Listen to the rest of Wanda and Seenaa’s interview here: https://www.blogtalkradio.com/wandas-picks/2021/03/24/wandas-picks-radio-show.

Note: This interview took place in March 2021. After months of hard work by OLLAA, as of May 1, 2021, the US Congress has publicly acknowledged the atrocities against the Oromos. Watch the statement: https://www.facebook.com/watch/live/?v=174030571256310&ref=watch_permalink.

Bay View Arts and Culture Editor Wanda Sabir can be reached at wanda@wandaspicks.com. Visit her website at www.wandaspicks.com throughout the month for updates to Wanda’s Picks, her blog, photos and Wanda’s Picks Radio. Her shows are streamed live Wednesdays and Fridays at 8 a.m., can be heard by phone at 347-237-4610 and are archived at http://www.blogtalkradio.com/wandas-picks. 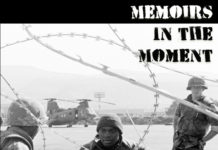