So What You Gonna Do, Family?

Sacred 70th Birth and Burial Days for My Brother GINO!

May our Divine Mother-Father Creator of and in All – and incredible Ancients and Ancestors from millennia past, yesteryears and, literally, yesterday – find you and (y)our extended Family staying in positive and healing Spirit. Though things are starting to re-open, WE hope you and yours will continue safety practices to protect ourselves against the known and the unknowns.

i’m choosing to stay masked up when in public; physically distancing; a supreme live-t (“die-t”) with veggies and fruits; plenty of clean water; meditation and prayer; exercise and healing sun rays; encouraging social connections, especially by phone, online and letters; as well as conducting my independent research to self-determine the best medicinals and/or vaccinations etc. Asé.

One of my three older of six blood Brothers, CHARLES EUGENE “GINO” ARMSTRONG, joined the Ancestors on 13 May. GINO is one of the strongest and most brilliant people that i have ever met.

When speaking of strength, i’m not only referring to just the physical, which can definitely decline for many of us as we age – though i certainly appreciate how as young boys, he would jump in and defend my little ass from bigger and older dudes who were beating me to a pulp.

Instead, i speak of how strong GINO is Spiritually and emotionally, despite the numerous challenges that faced him in his just 12 days short of a seven decades-long journey walking, working and teaching on this planet.

He, as well as our dear Father, The Deacon CLEVELAND LEE ARMSTRONG, SR. and our beloved God-Mother ELIZABETH ELIZANN OAKS ARMSTRONG and many others gave us the example of keeping your head held high and moving forward even when things weren’t going your way; of staying disciplined and confident in reaching your life’s goals, or even changing your direction for the better, while ignoring the distractions and outside noise.

Brother GINO brilliantly mastered all his major interests. He was an excellent student when not serving as the class jokester; one of the best catchers at every baseball level he played; a superb groundskeeper and artist for the then Kansas City A’s, Chiefs, Spurs and Royals; dedicated father to his three beautiful daughters and grand-and-great-children; highly proficient in armed weaponry as well as martial arts; quite skilled, and joyful, while playing the drums; a top-notch chef; and, with so many other Gifts.

GINO didn’t follow the crowd in life or music. He always stayed tuned in to his own rhythm and beats. And so, i am extremely grateful to have a life-long Big Brother, leader, protector and defender in my band. Rest in Peace and Power, Big Bro!  WE Love You Forever!

Now, i’m asking the rest of ya’ll to do me a favor and … give the drummer some, with a big hand clap! Asé.  Amen.

WE also lovingly remember and honor the lives and special contributions of several other new Ancestors – These include our cousin Baba MICHAEL “BIG MIKE” THRASHER, who for many decades coached and mentored our youth to be champions in sports and life. Asé; Queen Mama NIA KUUMBA, our incredible commUNITY organizer, career registered nurse and healer, revolutionary New Afrikan nationalist and reparationist in Benjamin Banneker Village, aka washington, dc. Asé.

Writer, actor and comedian PAUL MOONEY, who worked with the famous like REDD FOXX, RICHARD PRYOR, Eddie Murphy, the Wayans family, Spike Lee and Dave Chappelle. At a later time, i’ll share with you my “fight” with Mooney, who lived and left this earthly life here in Oakland. This was after he and his twin Suns performed at our Black Repertory Group, where he got his start, at our New Year’s Eve Celebration, when i served on that Board. Asé.

Finally, WE close in memory of the thousands of Palestinians murdered and dying in their occupied homelands by the imperialist-apartheid European settler terrorist-state of israel, in cooperation with the republikklan and demokkkratic parties in the Euro-usa settler-state and government.  And the millions who continue to perish from not only this deadly virus, but from the continuing crimes of systematic capitalist impoverishment, state and vigilante racial terrorism and corporate environmental destruction. Asé.

Long Live the Spirit, legacies and numerous contributions of these new and all our incredible Ancestors. Asé. Asé. Asé-O!

This month, WE have increased reasons to commemorate Juneteenth Freedom Days. Based on the work of so many, past and present, our movement has arrived at another milestone on our sacred path towards more truth, justice, full repair and healing of African nations and people through Self-Determination and Reparations!

Next week, on Tuesday, 1 June 2021, 10 am, PST, the State of California will hold its first meeting of the newly established, nine-member “Task Force to Study and Develop Reparations Proposals for African Americans Act.”

The California Reparations Task Force is mostly based on our federal legislation, H.R.40 and S. 40, that our National Coalition of Blacks for Reparations in America (N’COBRA) envisioned, helped introduce first in 1989 and have championed over the past three decades plus. Asé.

This is a significant development! California is, of course, the most populous and wealthiest of the 50+ Euro-centric white terrorist-corporate-racist-settler entities, colonies and territories which rule over so many in our world through their confederacy called the United States of America.

WE are happy that Rev. Dr. Amos Brown, Pastor of Third Baptist Church and leader of the NAACP in San Francisco, as well as Attorney Kamilah Moore of Southern California were picked to be on the Task Force. Surely, i’m disappointed not to be selected to this first in the U.S. Reparations Task Force Commission, nor any other long-time N’COBRA leaders in this state.

i am also very critical that an ally of Japanese American ancestry was chosen to address African American issues, in light of so many qualified Black advocates. However well-intended, allies should be utilized as resource persons to support, not attempt to lead or make decisions for our people and our movements. And vice-versa. That is what self-determination and true solidarity looks like. Asé.

That said, i/WE encourage persons of African ancestry and others to seek participation in Reparations Task Force hearings. Foremost, i am recommending that they hold a minimum of 12 public forums and/or hearings around the state where Black people can offer their powerful testimonies and reparatory recommendations and solutions. To view and participate in the 1 June, 10 a.m. hearing and agenda, go to https://oag.ca.gov/system/files/media/task-force-notice-agenda-060121.pd.

Also, as our Bay View goes to print, it is not yet clear how to sign up for the currently allotted, two-minute maximum offerings during the public comment period. WE have sent messages to Ms. Aisha Martin-Walton at ReparationsTaskforce@doj.ca.gov or 916-210-6387 and encourage you to do the same. Asé.

FREE THEM ALL! Asé. Please visit the website of our Jericho Amnesty Movement to learn more about the situations of our many long-suffering political prisoners and brave warriors for justice; as well as how you can best assist them, at https://thejerichomovement.com/.

CONTACT U.S. SENATOR ALEX PADILLA NOW! WE need your action advancing S.40, our companion Reparations legislation in the U.S. Senate. Respectfully, i am asking all residents of California to call our new Senator Alex Padilla at 1-202-225-2435 to insist he follow now Vice-Prez Kamala Harris and Senator Diane Feinstein as co-sponsors of S.40. Asé.

REGISTER NOW for our 32nd Annual Convention of our National Coalition of Blacks for Reparations in America (N’COBRA), 25-27 June 2021. As WE did last year, due to the ongoing global deadly pandemic and continuing capitalist economic depression which have disproportionately devastated our families and communities of African ancestry, this will again be a virtual gathering. Go to: www.ncobraonline.org.

Finally, please take a moment to review, consider, sign-on and forward our “Change the Name of the ‘white’ House Petition” to your networks. https://www.change.org/p/u-s-house-of-representatives-change-name-of-white-house.

As most of you know, our Bay View Newspaper deserves (y)our support to keep producing and sharing the truth from outside and inside the walls! So please send your check or money order in any amount to us at, 4917 Third Street, SF, CA 94124. Or go to www.sfbayview.com.

Continue to take (y)our righteous steps … knowing our Divine will do the rest. And walk in the Power of IMANI (FAITH) … on each and every day. Amen-RA Hotep! Asé.

Jahahara Amen-RA Alkebulan-Ma’at traces his ancestral roots to the Yoruba and Ewondo nations in Alkebulan-Afrika. He is a Baba (Elder), Pan Africanist, socialist and (inter)nationalist. He is also a “FREE-tired” community, labor union, environmental/solar and social justice organizer; a writer, composer, yogi, martial artist, vegan and author of several books, including “Many Paths to Kujichagulia (Self-Determination).” Baba Jahahara is, in addition, a Life Member, former National Male Co-Chair and Acting West Regional Representative of N’COBRA. Take a listen to a few songs from his musical catalog at https://soundcloud.com/search?q=jahahara. Invite Baba Jahahara to present at your group, school, spiritual gathering or event c/o support@africansdeservereparations.com or FONAMI, P.O. Box 10963, Oakland, CA 94610. 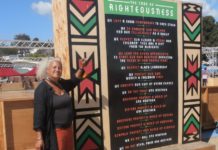 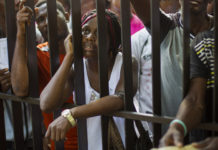