by Justice for Uhuru Coordinating Committee

The Justice for Uhuru Coordinating Committee (JUCC) is a small group of abolitionists advocating for the release of Uhuru Baraka Rowe, aka Brian Lee Rowe. We are writing this article to shed more light on the injustice in Uhuru’s case and the documented history of racial bias by the judge who sentenced him.

Uhuru is a 44-year-old Black man who was born and raised on the South Side of Richmond, Virginia. He has been incarcerated in the Virginia Department of Corrections for 26 consecutive years and is currently housed at the Greensville Correctional Center in Jarratt, Virginia.

Like many Black and Brown people ensnared in America’s racist legal system, the crime in which Uhuru took part occurred when he was a teenager, barely 18 years of age. Back in 1995, Uhuru, along with three other youths –17 and 18 years old – were alleged to have participated in a robbery on the South Side of Richmond that resulted in the shooting deaths of two people.

All three were arrested and after being harshly interrogated, confessed to their respective roles in the crime. Charges against the 17-year-old were eventually dropped because of substantial assistance he provided to authorities.

Judge James B. Wilkinson rejected the 13-year sentence recommendation and sentenced Uhuru to an aggregate sentence of 93 years without parole – a true death-by-incarceration (DBI) sentence.

Uhuru did not possess a firearm during the crime. Nevertheless, in June 1995, his attorney, Victor Motley and Richmond prosecutor, Learned D. Barry, pressured him into accepting a blind plea to two counts of second-degree murder, robbery and three firearm violations. The Virginia Criminal Sentencing Commission, newly created at the time, recommended Uhuru serve a maximum of 13 years in prison.

However, in August 1995, former Richmond Circuit Court Judge James B. Wilkinson rejected that recommendation, claiming they were incorrect. Whereupon he sentenced Uhuru to an aggregate sentence of 93 years without parole – a true death-by-incarceration (DBI) sentence. We call it a DBI sentence because the time Uhuru must serve in prison before release vastly surpasses any human being’s life expectancy.

Two years later, in 1998, the Richmond Times-Dispatch, a conservative newspaper by accounts, published a study of sentencing data from 1994 to 1997, which revealed that Wilkinson, a white judge, was racially biased against Black defendants during sentencing.

Analysis of the numbers using statistical software found “twice as much disparity” existed between Wilkinson’s sentencing and the sentencing of the judge in the other court.

Later that year, Jacob Van Bowen Jr., then a mathematics professor at the University of Richmond, conducted an independent analysis of the numbers using statistical software and found “twice as much disparity” existed between Wilkinson’s sentencing and the sentencing of the judge in the other court. He further explained, “We have looked at everything we have in the data that could explain it. This is a statistical finding, not a fluke.”

However, in the aftermath of this report and the firestorm of criticism Wilkinson received, arousing many in the legal field, Wilkinson was not censured or removed from the bench by the Judicial Inquiry and Review Commission, which has the power to do so per Section 10 of Article VI of the Virginia Constitution, and no formal investigation of the data or his sentencing practices was conducted at the local or state level.

This is perhaps one of the most egregious examples of a pattern of judicial bias and racism practiced by a sitting Richmond Circuit Court judge that was simply ignored and swept under the rug where it has remained hidden in plain sight all these years.

And now, in light of recent efforts to implement much needed criminal justice reforms in the aftermath of Black Lives Matter protests sparked last year by the police murder of George Floyd, the JUCC has created an online petition calling on Gov. Northam to commute Uhuru’s sentence. This petition has over 2,000 signatures.

The JUCC has also created a petition calling for Gov. Northam to establish a commission to investigate and review all of Judge Wilkinson’s sentences.

The question is will Gov. Northam display the same level of courage and enthusiasm in remedying the injustice in these matters as he has in other instances of anti-Black racism in the Commonwealth, or will he choose to turn a blind eye to it like local and state officials in the past? 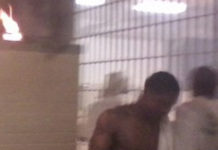 The Abolitionists or absolute bull: The myth of the Great White Hope