by Wealth and Disparities in the Black Community

The San Francisco Sheriff’s Department has operated as a rogue, racist and corrupt entity for far too long. The Board of Supervisors has thus far refused to hold the department accountable. We, along with our followers and allies, have repeatedly reported outrageous Sheriff’s Department conduct, including racist, sexist and lewd social media posts, as well as a targeted campaign of harassment against Wealth and Disparities in the Black Community (WDBC) founder Phelicia Jones.

Yet the sheriff and the supervisors have taken no action. Ms. Jones continues to be targeted by the department for her work in support of justice for Black lives.

We were directed by one supervisor to attend a hearing June 24 on the SF Sheriff’s Department budget and to make public comment on June 25. The process seems engineered to discourage public involvement – with commenters waiting several hours on the phone to make a comment of one minute or less, and emailed comments being not publicly noted at all.

This is a recurring theme: Where is the accountability? What is the BOS doing in response to the comments people waited hours to make and how will the BOS hold the Sheriff’s Department accountable? The BOS are elected to represent us, and they hold the purse strings in terms of the budgeting for city departments.

If we can’t rely on the BOS to even ask questions of the Sheriff’s Department about its incredibly problematic behavior, then we are frankly not being represented by our supervisors.

Carol Isen, director of the Department of Human Resources (DHR), is well aware of the abject anti-Black racism within the Sheriff’s Department and has done nothing.

Sheriff’s Department staff, up to and including those at the highest level, have colluded in a targeted campaign of harassing, ostracizing, attacking and marginalizing Phelicia Jones in retaliation for her anti-racist work, through which she works to hold law enforcement accountable. This harassment has even included erecting a physical barricade in Ms. Jones’s workspace to separate her from her colleagues.

Carol Isen, director of the Department of Human Resources (DHR), is well aware of the abject anti-Black racism within the Sheriff’s Department and has done nothing. Sheriff Miyamoto has never addressed nor apologized for this outlandish hostility exhibited by the members of the department.

Instead, department leadership has blatantly lied about the incident, with Captain Adams claiming that Phelicia herself “requested” to be physically barricaded away and ostracized from her colleagues.

At our June 17 Juneteenth Kickoff Rally, we announced that we are putting the City and County of San Francisco on notice that the Sheriff’s Department’s unchecked racism and corruption will no longer be tolerated.

Black city and county workers have reported anti-Black racism for years – and some have made national news by suingbased on discrimination. The BOS has taken NO corrective action regarding these complaints.

We demand the immediate suspension of the Sheriff’s Department budget until such time as there is a plan for accountability and a written plan and commitment by the sheriff to quarterly reporting to the public and city officials regarding how the department is identifying racism and corruption and how it is enacting discipline for these behaviors. We demand the city supervisors support this basic demand for accountability. 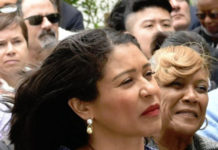