“Today we directly take on those who are responsible for bringing these dangerous and unregulated weapons into the streets of San Francisco and throughout the state of California,” said District Attorney Boudin. “Ghost guns pose a grave threat to public safety; these untraceable firearms are readily available to children and prohibited persons. We will hold the companies responsible for their manufacture and distribution. Our office is proud to be working with some of the nation’s finest trial lawyers at Keker, Van Nest, and Peters, as well as with some of the leading firearm litigation and regulatory experts in the country at the Giffords Law Center. Together we will confront the severity of the gun violence epidemic at its source.”

“Keker, Van Nest & Peters is proud to be partnering with District Attorney Boudin’s office on this groundbreaking litigation to hold ghost gun manufacturers and retailers accountable,” said John Keker of Keker, Van Nest & Peters. “The defendants manufacture and sell dangerous weapons without verifying consumers’ ages or eligibility to buy guns. These illegal practices allow children and others who cannot lawfully buy weapons to obtain them far too easily. We look forward to our continued partnership with District Attorney Boudin’s office and the Giffords Law Center to prevent gun violence in California.”

“Ghost guns are flooding into communities across California and people are being killed as a result,” said Hannah Shearer, litigation director of Giffords Law Center to Prevent Gun Violence. “The companies named in our lawsuit are dealing in misinformation and profit directly from this violence. Their illegal business practices include selling ghost gun parts and kits to Californians who haven’t passed background checks. They also fail to disclose to the buyers that anyone who builds a ghost gun faces criminal liability if they fail to obtain a serial number or submit homemade handguns for safety testing. It is time to hold these reckless companies accountable for the deaths, violence and criminal prosecutions caused by their disregard of federal and state firearm regulations and consumer protection laws.”

The firearms commonly referred to as “ghost guns“ are untraceable, fully functional, unregistered guns pre-packaged for assembly by purchasers. Also referred to as Privately Manufactured Firearms (PMFs), they are sold in kits containing the necessary components for the purchaser to assemble at home. Countless YouTube videos and internet sites are available to guide a consumer in finalizing the gun assembly at home. Assembly requires minimal tools and can be completed in under an hour – sometimes significantly less.

Manufacturers and sellers of ghost gun kits and parts do not follow firearm sales regulations. Ghost guns do not come with serial numbers or other methods of tracing the guns or their owners and, as a result, the government is unable to track them or to regulate who has access to these weapons.

The pre-packaged kits supplied by ghost gun manufacturers and retailers allow for easy and fast assembly of fully functional weapons. Using common tools, an officer acting under the direction of the San Francisco District Attorney’s Office was able to assemble the pistol frame of one of the defendant’s ghost guns in 24 minutes and 40 seconds and attach it to a slide assembled in about five minutes. He was then able to fire the gun.

The proliferation of ghost guns in San Francisco and California

The number of ghost guns associated with shootings in San Francisco has dramatically and rapidly increased in recent years. As San Francisco Police Chief William Scott told the San Francisco Chronicle, nearly half of the firearms recovered in 2020 in connection with San Francisco homicides were ghost guns – a staggering increase since 2019, when that number was just 6 percent.

Ghost guns do not come with serial numbers or other methods of tracing the guns or their owners and consequently the government is unable to track them or to regulate who has access to these weapons.

California suffers the bulk of the impact of ghost guns. According to the Bureau of Alcohol, Tobacco, Firearms and Explosives (ATF), which has been conducting trainings for law enforcement personnel throughout the United States, in 2020, the state of California accounted for 65 percent of all ghost guns seized by their office. The next highest state was Maryland, which accounted for just 7 percent of the national total.

This troubling trend coincides with an increase in gun violence throughout the state of California and the nation, an increase that researchers attribute directly to the increase in firearms. There have been many instances of ghost guns used in mass shootings, including in California. Death by suicide is the second most common form of death for children and young adults ages 10 to 34 – and studies have shown that access to firearms increases suicide risk dramatically.

Ghost guns impede investigations of firearm crimes and fuel cycles of gun violence. Because ghost guns lack serial numbers and there are no records of their sale, law enforcement cannot initiate trace requests of ghost guns through the ATF or the California Department of Justice when such firearms are recovered in crimes.

The proliferation of ghost guns poses an obvious public safety issue. Ghost gun companies do not follow federal and state point-of-sale and record-keeping requirements; as a result, anyone can obtain a ghost gun – even if they cannot lawfully possess or purchase a firearm due, for example, to a criminal history. People ineligible to possess firearms have obtained ghost guns only to use them to shoot and kill.

The cost of the ghost gun companies’ illegal actions is “measured in lives.”

Ghost guns are also particularly dangerous in that because they are assembled privately, they fail to undergo the rigorous safety testing required under the law. These safety measures include drop safety testing to ensure a firearm will not accidentally discharge if dropped, as well as firing tests to ensure that the weapon can be fired multiple times without malfunction. The lack of these safety testing measures only increases the danger these weapons pose – including to children.

Ghost gun manufacturers and retailers have allowed untested and untraceable weapons to be available to children and those prohibited by our laws from possessing firearms. As the complaint alleges, the cost of the ghost gun companies’ illegal actions is “measured in lives.”

Ghost gun manufacturers and retailers do not comply with lawful business practices and evade the laws governing the manufacture, sale and possession of firearms – laws designed to protect consumer and public safety. What’s more, as the complaint sets out, ghost gun companies deceive California consumers about the legality of their products. There are many requirements under California law for gun ownership and registration, but the complaint alleges that ghost gun companies mislead consumers into believing that ghost guns are legal, thus engaging in false advertising and fraudulent business practices.

The lawsuit further alleges that ghost gun companies violate the federal Gun Control Act, which requires serial numbers on all firearms and requires that all firearms sales take place through a Federal Firearm Licensee, which must run background checks. It also alleges violations of the California Assembly of Firearms Law, which forecloses any ghost gun loopholes by specifically requiring that private manufacturers of firearms apply to the California DOJ for a serial number – and to undergo background checks.

Defendants are also accused of undermining the California Unsafe Handguns Act (“UHA”), which requires that handguns – including ghost guns – sold within California meet certain reliability and safety standards – including a firing test and a drop safety test. Some of the defendants are also accused of violating the California Manufacture of Firearms Law, requiring any federally-licensed firearms manufacturer who manufactures at least 50 firearms per year to obtain a California firearm manufacturing license – which itself comes with specific obligations, including engraving of serial numbers.

The need for new approaches to end the gun violence epidemic

“Getting guns off of the street is vital in the fight against violence. We have been trying to remove guns from our community for years and we need to continue to focus on strategies that take guns out of the hands of people wanting to cause harm to others. I want to thank DA Boudin for taking a major step in preventing more guns from coming into our neighborhoods,” said Shamann Walton, president of the SF Board of Supervisors, representing District 10. “Suing these ghost gun manufacturers for the irresponsible and irreparable harm they cause will aid us in the battle against gun violence and hold these companies accountable.”

Current punitive approaches through the criminal justice system have not worked to end gun violence, but instead have fueled unsolved homicides cases, mass incarceration and greater racial disparities.

“As a mother who lost my youngest son, George C. Scott, at 24 and a nephew at 23, along with countless mothers, fathers and families to this gun violence epidemic here in San Francisco and our entire nation, and as an activist who continues to work with incarcerated people for real justice, I know firsthand the critical urgency with which we must find new unbiased approaches to end gun violence,” said Mattie Scott, founder of Mothers in Charge, and president of Brady United Against Gun Violence.

“Decades of rising gun violence especially in communities of color have demonstrated that the current punitive approaches through the criminal justice system have not worked to end gun violence. Instead, they have fueled unsolved homicides cases, mass incarceration and greater racial disparities throughout the criminal legal system. We need new approaches NOW! We have met with our SF DA Boudin regarding this urgency with full transparency and I commend District Attorney Boudin for his leadership on this critical and urgent problem. Together, we must continue working with our law enforcement leaders on this crisis.”

“We must use all of our tools to tackle head-on the growing crisis of guns on our streets,” said District Attorney Boudin. “Today’s litigation seeks to aggressively confront this problem at the root and get these dangerous weapons off our streets.”

Rachel Marshall is director of communications, policy adviser and assistant district attorney in the office of San Francisco District Attorney Chesa Boudin. She can be reached by email at Rachel.Marshall@sfgov.org, by mail at 350 Rhode Island Street, North Building, Suite 400N San Francisco, CA 94103, and by phone at 415-416-4468. 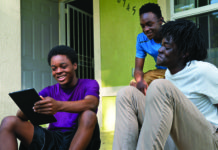