San Francisco – On Dec. 22, 2021, a San Francisco jury acquitted Gione Edwards, 27, of assault and battery charges in a case from April 2020 where a hospital security guard tried to prevent him from entering Kaiser to advocate for his pregnant partner.

The charges carried the potential of two strikes against Mr. Edwards who has no prior convictions and is set to graduate from college soon. Deputy Public Defender Jack Lamar represented Mr. Edwards, whose legal trial deadline passed in March 2021, and expressed relief at the outcome.

“This was an emotionally powerful case that took a lot of courage from Mr. Edwards and his community to stand up to these allegations knowing that so much was on the line for him,” said Mr. Lamar. “The jurors were remarkably fair and showed Mr. Edwards dignity and respect, which is not what can be said for the way Kaiser treated this young African American couple.”

Mr. Edwards and his partner both work at hospitals and are familiar with professional standards and protocols. At the time of the incident, his partner was pregnant with what would have been their first child, but complications put the pregnancy at risk, which is why she was attending regular appointments at Kaiser.

On the day of this incident in April 2020, Mr. Edwards’s partner arrived at Kaiser for her doctor’s appointment, but one of the nurses was under the impression that she did not have an appointment and so tried to block her from taking the elevator upstairs.

The situation escalated and resulted in nurses and security guards escorting her out of the building. During this whole incident, she was on FaceTime with Mr. Edwards who lived nearby and walked over to assist.

waiting for the resolution of their cases, the amount of stress and disruption is palpable and unacceptable

The defense team argued that Mr. Edwards was acting in lawful self-defense and that the injuries were accidental. The jury returned a verdict of not guilty on the two main felony counts and hung 11-1 in favor of not guilty on a lesser misdemeanor charge, which has now been dismissed. Several jurors were compelled to hug Mr. Edwards after court.

Mr. Edwards grew up in the Western Addition and is about to graduate from SFSU with plans to attend graduate school. He has always excelled in academics and athletics, and during the trial, the defense called several character witnesses from the community – including a former coach and a member of the San Francisco Fire Department – who spoke highly of his character and his achievements.

“We are relieved that Mr. Edwards finally got his day in court and that the jury returned the right verdict so that he can get on with his life and future success,” said San Francisco Public Defender Mano Raju, who sued San Francisco Superior Court in September to address the growing backlog of criminal trials while many courtrooms sit empty.

“This case shows that even for people who are not in jail, but are waiting for the resolution of their cases, the amount of stress and disruption is palpable and unacceptable. I am proud of Mr. Edwards and the whole defense team for the fortitude they showed in taking this case to trial.” 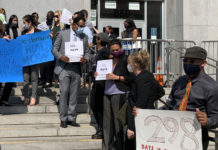 SF jury takes only 5 hours to reach a not guilty verdict for a man who’s been waiting 17 months to fight false accusations...