An invitation to the hearing Monday, April 6, 1 p.m., in City Hall Room 263 on Mayor Newsom’s plan to give stimulus funds to Lennar 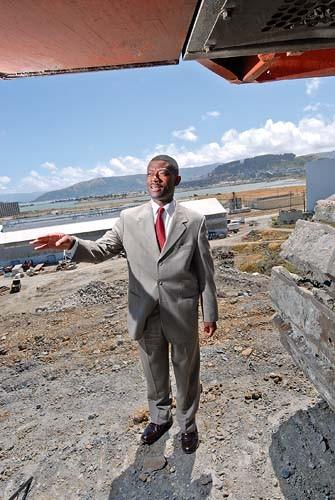 It seems sort of like punching at the hole in the donut that’s just not there – the soul of a vast, publicly traded corporation, Lennar. It’s not there.

So, since the soul’s not there, never has been and never will be, not in any publicly traded limited liability corporation, I don’t want to sound like I’ve come to the wailing wall here, to cry, “Lennar! Lennar! Oh, Lennar, when will you find your soul, your conscience and your bisexuality? Lennar, when will you stop stirring up all that radioactive asbestos in the Hunters Point Shipyard into the air that all the fine people of color in Bayview Hunters Point are obliged to breathe in order to live?”

So this is to deconstruct Lennar’s misdeeds in the mortgage meltdown, the credit crunch, the misery index rising all over the world. Not to say that getting Lennar out of Bayview Hunters Point or out of San Francisco would be enough protect us all from the violence and theft of the Redevelopment Agency’s next corporate candidate for “Master Developer” in the shipyard or wherever else, because:

Publicly traded limited liability corporations (LLC) are legally amoral entities that crush life and the planet’s ability to sustain it in reckless pursuit of profit. That’s what they are, and that’s what they do.

And they’re doing it now, at a more rapid rate than ever before as wealth is more concentrated and publicly traded corporations are therefore more able to purchase political favor, influence and, outright transfers of wealth, including the bailout and government land grants to private corporations in the Hunters Point Shipyard, in the Presidio or on Mare Island, Treasure Island or anywhere else.

If San Franciscans were not struggling with the Lennar Corp., we would no doubt be struggling with another fundamentally amoral corporate mega-homebuilder like Pulte, D.R. Horton, Hovnanian, KB Home or Centex, a national leader in prison construction and Lennar’s sometime joint venture partner.

We might even be struggling with Beazer Homes. I followed Beazer around the Web for a while, often getting confused as to whether Beazer was building private prisons or whether Beazer execs were going to prison for mortgage fraud.

Lennar’s size and political connections seem to merit more get outa jail free cards than Beazer’s, but the last time I spent much time studying Beazer, they were at least able to partner with Lennar and Countrywide, Argent, Bigelow Homes, AMC Mortgage, Ameriquest Mortgage, Hovnanian Homes, bailed-out Bank of America, and other homebuilding and mortgage offenders in a highly dubious charitable enterprise called “Rebuilding the Gulf Coast,” a subdivision of HomeAid, which describes itself as “a leading national non-profit provider of housing for today’s homeless” – whose ranks continue to swell as more and more homeowners and renters are evicted in mortgage foreclosures, often due to the miscreance of HomeAid’s partners in charity.

One of Lennar’s HomeAid “Rebuilding the Gulf Coast” partners, Ameriquest Mortgage, has probably been charged, tried, convicted and fined for more predatory lending and mortgage fraud, but that has not been enough to put Ameriquest out of business. Indeed, George Bush finally made Ameriquest’s late founder and CEO, Roland Arnall, U.S. ambassador to the Netherlands.

So why keep digging for the dirt on Lennar?

We all know that neither San Francisco, the Redevelopment Agency nor Bayview Hunters Point (BVHP) is going to find a more ethical “public private” partner in the world of publicly traded limited liability (LLC) mega-homebuilders.

With Lennar back in its Miami home base, replaced by Pulte, Hovnanian, Centex or even Beazer Homes, we’d soon be trapped in a new string of similar state corporate ventures, unless we got rid of Redevelopment altogether.

Digging for the dirt on Lennar makes sense only if the goal is, ultimately, to dispense with the ridiculous idea that any mega-homebuilder could create community or anything but fraud, corruption and damage to existing community.

And let’s not forget prisons; the business press refers to the private prisons, also built by the mega-homebuilders, as “real estate investment trusts (REITs).” The mega-“homebuilders” create those too.

Only people – neighbors who know and care for one another in a lot of daily interactions and rituals, day after day – build community.

Low-interest loans to independent, local and, by law, fully liable contractors, combined with free instruction and apprenticeship in the building trades could have by now done far more to ameliorate “urban blight” decried by the Redevelopment Agency than a dozen cookie cutter Redevelopment Agency “concept plans” designating the Miami-based Lennar Corp. or any other mega homebuilder as BVHP’s master developer.

That might even have gotten a few units of sustainable housing built, unlike Lennar and Redevelopment, in Bayview Hunters Point since 2003.

And it might have employed some folks, sustainably, to create a few community gardens, bioremediation centers, solar installations or small windmills, like the one Espanola Jackson recently said, publicly, that she was still waiting for in her back yard. She deserves it! After all these years, Espanola deserves her backyard windmill, her distributed power, political and energetic. The last time I was at City Hall, Espanola was asking LAFCO why two years had gone by and there still wasn’t a single small windmill in Bayview Hunters Point.

But I’ll be in Room 263 at City Hall at 1 p.m. on Monday, April 6, to go up against Lennar and the Redevelopment Agency yet again. Now it seems that Lennar and Mayor Newsom have decided they deserve a chunk of San Francisco’s economic stimulus funds to stir up some more toxic crud in the shipyard, but Supervisors Eric Mar and John Avalos have rallied the troops to hold them at bay till more of us can get down there on Monday.

But this is getting old. This is getting redundant. I’m getting tired. So I hope someone else who shows up on Monday will join me in calling for the abolition of the Redevelopment Agency, the extradition of Lennar to some long abandoned multiplex theme park and the installation, at last, of Espanola Jackson’s backyard windmill.

Now that would be real community; as long as Espanola’s around, the word might still survive Lennar’s use of it.

That would be consecrating, sustainable ritual. And that would be so damn much fun! There’d be barbecue! I know there would. Potato salad, green beans and cole slaw. Lemonade and organic blackberry pie. And that, the installation of Espanola’s backyard windmill, is a party I absolutely would not miss.