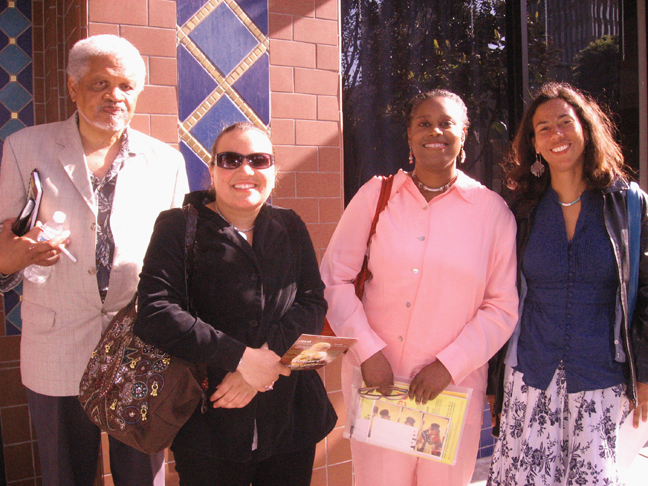 Ishmael Reed is one of the most read writers of his generation, along with Toni Morrison and Amiri Baraka, living in America. In 1962, Reed co-founded “East Village Other,” a well known underground publication at the time, and was a member of the Umbra Writers Workshop, which helped to give rise to the Black Arts Movement. He has published nine novels, four collections of poetry, six plays, four collections of essays and a libretto.

He currently lives in Oakland, and I approached him one day while he was visiting KPFA’s studios to ask him what he thought about the state of affairs between the police and Oakland’s Black community, with the backdrop of the police murder of Oscar Grant and, in a separate incident, the police murder of Lovelle Mixon, after Mixon allegedly killed four Oakland police officers.

What resulted was a history lesson in Oakland and California politics. Sit down for class with legendary writer and educator Ishmael Reed.

M.O.I. JR: What is your opinion of what’s been going on in the Bay Area, starting at the beginning of 2009 since the murder of Oscar Grant by BART police officers? The alleged murder of four police officers by Lovelle Mixon, then them killing him? Can you put this in a historical context? And what is your opinion of what is going on in the Bay Area right now?

Ishmael Reed: Yo well, I think that what happened in the encounter between Mixon and the four police officers is a culmination of mean-spirited policies that are being directed from the suburbs – people who according to the Wall Street Journal have the least to fear from crime, yet are driving the issue because they watch the media. They get their information about the world from the media, which since the 1830s has been seen as their marketing strategy, that of humiliating and ridiculing Blacks, all for their chief product, which is white supremacy.

I wrote a book called “Blues City: A Walk in Oakland,” and I was appalled at the statistics at how the Native American population was decimated.

M.O.I. JR: Are you saying that the Native American population in Oakland was decimated?

Ishmael: Well, all over California. As a matter of fact, I think California took the lead in committing genocide against Native Americans. So you got a mean-spirited legacy that comes down to the present day. There was a legislature called “the legislature of a thousand drinks,” where the legislators were so filled with alcohol that they voted a number of expulsion measures casting certain groups out of the population. Of course you had a Chinese Exclusion Act here; you had a Japanese Exclusion Act.

M.O.I. JR: For the younger people, what are these acts that you were talking about? And what era do they come from?

Ishmael: Well, it was an act that excluded Chinese migration for a period of time because the Chinese were competitive with the whites who came out here.

I did an anthology of poetry called “Califia,” named after the Black Amazon Queen for which the state is named, according to Gaelic and Spanish legend. And I found that there were songs that the gold miners used to sing declaring that California was white, and a white supremacist state, and they wanted to exclude other groups. So the Chinese came out here and they were successful at gold mining, so they drove them away from the gold mining fields. And then they were successful at raising crops and produce, so they drove them into these Chinatowns. So the legacy is that in Oakland they had anti-Chinese riots.

Ishmael: Around the 19th century, you know? There was a mayor and a governor whose house is still standing, the Pardee Mansion, and during the administration of the mayor, the first mayor, Enoch Pardee, there were anti-Chinese riots. It has almost been erased from Oakland history. As a matter of fact, the last two buildings that were part of the original Chinatown above Broadway were just demolished to make way for this Uptown project.

So that’s California. You’ve had police brutality. You’ve had Police Chief Parker down in Los Angeles, who initiated Gestapo tactics against the African American population.

So what happened there was a culmination of mean-spirited policies like this Three Strike thing. Now when Three Strikes came up, there were people who said that some people who were on parole would shoot it out, before returning to these hell-holes called California prisons where people are tortured, where in one prison gladiator fights are staged, where rape is used as an instrument of punishment.

I don’t know why these progressives and liberals are worried about what’s happening at Gitmo; that happens everyday (laughing) here in California. You see the liberals and the progressives discussing Gitmo and how it is terrible down there. So they care more for some people who are members of Bin Laden’s staff than they care about African Americans and Hispanics in jails here.

So torture goes on every day in California. As a matter of fact, it’s argued that the state of California prison hospitals is a form of torture, where they’ve estimated that three inmates are dying every week as a result of bad medical practices. So you might be convicted for a non-violent crime, and you can go get murdered by the bad medical facilities in the prisons.

I thought that Jerry Brown promised when he became attorney general that he would push for a policy of rehabilitation, but instead of that they lock these people up, treat them like animals, then they come back. They don’t go back to the suburbs where all this punishment and revenge stuff is coming from; they come back to our neighborhoods.

They come back to Oakland neighborhoods without any education. They cut off the Pell grants. Remember those Pell grants were like 1 percent of the education budget, and they’re so mean-spirited they cut that out. Because at least the guys used to go in there and get an education, get a BA or get a, what you call it, a GED or whatever. Some of the guys were getting masters degrees.

Prisoners used to send me books 700 pages long, after writing them in prison. The prisoners at Ramsey State Penitentiary read one of my books, and I took some money and went down there in Texas. It seems that this would be an opportunity to give them the kind of education in prison that they are not receiving in the public schools. But no, they want to punish them.

Just all these different policies came together, including traffic profiling. This is a new trick and scam that they are using to harvest Black people for the prison industrial complex because they have to keep feeding bodies in there to keep these things going. And so now they got a thing called – this new scam is “You didn’t come to a complete stop.”

Now I live in the ghetto. I was coming down to buy oatmeal about 7:30-8 in the morning. I’m driving towards Pak N Save, and a cop comes around. I was glad to see a cop there because murders have occurred on that corner around 45th Street. He was there; he came swooping out there and gave me a ticket. Checked me out. You know they always check you out.

They always have you under surveillance. African-Americans all over the country live in a police state, because we’re always under surveillance. So this is interesting. So first of all, the fine was $102. I’m thinking about somebody who is broke, who doesn’t have any money, probably going out trying to find a job in his car, probably sleeping in his car. He has to raise $102.

Then they put you through the bureaucracy. So I’m trying to find out how to pay this, and I’m shifted from one telephone number to another. You get lost in that. Then they say they are supposed to advise you of, send you a message about your fine and you don’t get that in enough time. Then when I went down there to pay the fine, 95 percent of the people down there in traffic court were Hispanic or Black.

Now is that a coincidence? Are whites better drivers? Are Blacks and Hispanics such bad drivers that whites should teach them and run traffic schools? No, this is not a coincidence. This is traffic profiling. And so what happened there in that encounter was the policy gone wrong of racial profiling. It’s a policy all over the country.