“I will not leave a word for railers. And I will not ease the hearts of my enemies by the violation of my honour. I have been born with misfortune till I have discovered its secret meaning.” – Anitar

In September 2007 I was validated on the mere basis of my New Afrikan revolutionary beliefs and political activities, expediently defined and treated as “gang activity.” My validation is a clearly illegal suppression of my First Amendment rights, as in reality our captors deeply fear a politicized prisoner population.

I was accused and later found guilty of being an affiliate of a “prison gang” based on:

I was not given the required advance and timely notice that the person’s words I included in my own manuscript could constitute alleged “gang related” material for purposes of gang validation, even though I had been permitted to receive these political works and possess them for many years. Why isn’t this arbitrary and draconian policy not only a form of entrapment but an obvious political attack?

I was validated on the mere basis of my New Afrikan revolutionary beliefs and political activities, expediently defined and treated as “gang activity.” My validation is a clearly illegal suppression of my First Amendment rights, as in reality our captors deeply fear a politicized prisoner population.

At any rate, on June 21, 2013, I was released from the Short Corridor [the SHU – or solitary confinement unit – at Pelican Bay State Prison] and, upon attending the DRB [Departmental Review Board] hearing, I was literally told that my political writings were in the hands of others and would I consider not writing such because of their “concerns.” Naturally I refused to conform to their illegal requests, but a clear message was delivered to me: CDCR prefers that prisoners not evolve politically but to remain gang oriented inmates.

After a mere 16 days on A Facility [general population at Pelican Bay] I was locked up on July 8, 2013 [the first day of the latest hunger strike, when 30,000 prisoners joined in], and accused of a conspiracy to assault staff, even though I didn’t have any co-conspirators.

One of course can’t conspire alone, nor did I have any motive to do so. I mean, I’m due for a Parole Board hearing in May 2014, have a 32-year-old daughter and three granddaughters I’ve never held, and wouldn’t provide CDCR ammunition to prove their case by attacking staff as that would obviously work against the interests of those fighting to be released from the SHU.

I was again released from Ad-Seg [administrative segregation, the “hole”] on Dec. 18, 2013, to B Facility. In December 1989 I had been on one of the first buses to Pelican Bay from New Folsom. We opened up GP [general population] and, although it was a terrible place and program back then, today it is a thoroughly stifling and intensely repressed environment.

I was literally told that my political writings were in the hands of others and would I consider not writing such because of their “concerns.” Naturally I refused to conform to their illegal requests, but a clear message was delivered to me: CDCR prefers that prisoners not evolve politically but to remain gang oriented inmates.

It’s as though one is in a Russian gulag under extreme authoritarian control, observation and smothering dictatorship. If we’re lucky, we receive two yards [time outdoors] per week and those who are A1A may get an hour dayroom in the evening. Yard is usually under an hour and only with your block and RDOs [regular days off for staff, a scheduling factor]. You’re stripped naked anytime you exit the cell block. 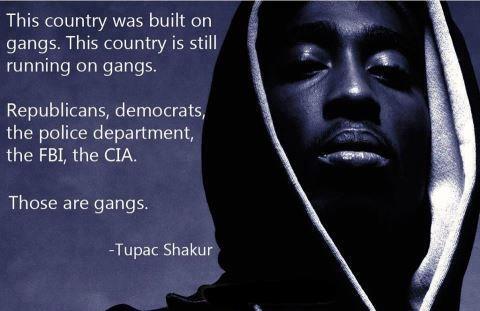 Picture this: A Black gangster encounters a big time narcotics dealer from Nicaragua and, in the course of building their relationship, the agenda of providing the Black gangster large quantities of drugs is discussed. The narcotics dealer requires money to purchase materials to wage terrorism against the Sandinistas’ progressive regime in collaboration with the murderers of Patrice Lumumba, Laurent Kabila and Che Guevara – the CIA. The Black gangster, being under the enemy’s reactionary spell in terms of twisted values rooted in motivations of greed over human life, agrees to the script.

Nah, it did not bother them one damn bit that their conspiracy involved the targeted destruction of both the Nicaraguan and New Afrikan communities since, of course, their level of debauchery doesn’t permit questions of morality to override their scheme of carnage and money. Now, the historical facts of the carnage inflicted – e.g., aggravated gang violence, the introduction of automatic guns into our hoods, the transplantation of LA gangs across the country, drug wars, reactionary Contras against the genuinely progressive Sandinistas etc. – are well documented.

The basic point and question I pose is: WHY AM I EXPECTED TO FEEL OBLIGATED TO SUPPORT THE BLACK GANGSTER WHO ALLIED HIMSELF WITH THE CONTRA-CIA DRUG DEALERS TO THE DAMN DETRIMENT OF OPPRESSED HAVE-NOTS?

Yep, he comes to prison and has a conflict, say, due to a drug deal gone bad, and simply because of his Black skin – no, not Black loyalty – I’m expected to back him, even though he might have negative intentions of going home to continue to push more POISON. To my mind, particularly as regards those who’ve had ample opportunity to politically mature, these types obviously don’t care about Black life.

In truth, most of the conflicts between Blacks and Southern Mexicans or New Afrikans and North Amerikans/Whites are motivated by drug or gambling debts or street gang shit. Upon close examination of such conflicts in the tombs, it will be discovered that, in the main, these aren’t inherently “racial conflicts.” If they were, Blacks and Northern Mexicans would be in conflict. There is a natural motivation to be pulled into the fray, as respect and survival is a must.

The bulk of the riots and melees are rooted in the “gang psychology,” an ego-driven complex of misguided and mis-oriented poor folks. That’s what happens when you feel devoid of meaning and power; you become susceptible to profound brainwashing in conformity to irrational behavior via the so-called OGs.

A real OG feels obliged, as a matter of principle, to convey the TRUTH to the young folks. One truth is that the gang psychology and lifestyle is a dead end, and another truth is the socio-economic and political status of Mexicans, Native Amerikans, New Afrikans etc. is steeped in exploitive and oppressive domination no matter how camouflaged.

Yes, the gang psychology is ever at the high and unnecessary cost of self, family and one’s own community. At any rate, shouldn’t the mature among us ask how is it logical that a personal dispute over a drug or gambling debt between a New Afrikan and Mexican or Black and White devolves into a racial conflict when they are two men?

The Black Liberation Army, Black Panther Party, Irish Republican Army, FARC et al had it dead on as far as holding especially big-timers in the game accountable for their crimes against the people. And for revolutionaries, I thought that the correct orientation in which to govern ourselves is to recognize, as New Socialist men and women, that all who are exploited and oppressed via capitalism-imperialism are “our people” on the plane of struggle across the world.

One truth is that the gang psychology and lifestyle is a dead end, and another truth is the socio-economic and political status of Mexicans, Native Amerikans, New Afrikans etc. is steeped in exploitive and oppressive domination no matter how camouflaged.

Thus, how in the hell could have-nots become the “other” if, as revolutionaries, we ain’t playing games or if, as a matter of principle and scientific thinking, we don’t truly subscribe to the illogicality of the gang mentality? Even so, as a sane New Afrikan, I’m certainly not naïve and hardly under the illusion that, if a conflict pops off, I’m not on some fool’s radar, even as the root of the conflict is not “racially motivated” but really gang madness.

Yep, such is the acute and precarious dilemma one is daily confronted with as one wisely navigates the landmines in these tombs of gloom and doom. However, it is imperative that we “bloom” by transforming these penological environments into academically conducive domains of comprehensive development to prepare folks to pursue our have-not communities’ socio-economic interests on a resolute and competent level.

Recently it was said that 20 years ahead, robots will take 50 percent of the jobs in this country. This is known as the “New Second Machine Age.” So what are the direct implications and what will be the inevitable result of the introduction of this rapid increase of automation? Who will be negatively impacted by this development, which is motivated by greater competitive advantage and profit accumulation?

If you correctly conclude that it’ll then be poor and working class folks, especially people of color, who’ll be hurt by this development and hence realize it’ll mean more people resorting to crimes to survive, which in turn means greater devastation in our communities, WHAT THEN IS OUR RESPONSIBILITY? I mean, do we struggle for social and economic demands for self, family and our communities or do we sit on our butts waiting on canteen and the next NFL or NBA game in complete individualistic apathy?