Four journalists filed official complaints on May 10 against the San Francisco Sheriff’s Department charging they were intimidated and unlawfully roughed up while attempting to report on a May 6 protest inside City Hall that called for the firing of Police Chief Greg Suhr and the resignation of Mayor Ed Lee.

Natasha Dangond and Gabriella Angotti-Jones are photographers for the City College campus newspaper, The Guardsman. Joel Angel Juárez is a student at San Francisco State University who photographs for the Mission neighborhood newspaper El Tecolote. The fourth journalist is Sana Saleem, a reporter for the news site 48Hills.

The journalists said that when sheriff deputies attempted to push protesters out of City Hall at about 8:50 p.m., they were grabbed, shoved to the floor, and one of them was struck in the head with a baton. Dangond sustained a welt on her head and bruises on her arms. She was treated at a local medical emergency center for head contusions. Saleem suffered sore ribs and Juárez sustained hip, knee and back pain.

The protest stemmed from a 17-day hunger strike in front of the Mission Station over the use of deadly force by police in a string of confrontations with San Francisco residents of color. The protesters were also calling for the removal of Police Chief Shur.

The complainants seek a formal apology from the involved deputy, a review of policies and practices by deputies regarding the rights of journalists during protests, implementation of policy reforms and a reprimand of the involved deputy.

The journalists are also looking into whether they have grounds for filing a civil damages lawsuit.

Juan Gonzales heads the Journalism Department at City College of San Francisco and in 1970 founded San Francisco’s premiere Latino bilingual newspaper, El Tecolote. He can be reached on Facebook or at jagonzal@ccsf.edu.

This previous Friday, May 6, I was photographing at the big‪ #‎hungerforjusticesf rally that took place inside City Hall in San Francisco. During this rally, I was alongside many other journalists and press members documenting the events that took place.

After I jumped down from a desk I was standing on to photograph, a riot police officer grabbed me, pinned me against the desk and struck me in the head with a baton.

Thankfully I was pulled out immediately and carried outside to safety. I do not know what would have happened to me if I wasn’t rescued.

I was clearly with the media, not partaking in any rioting. Also, protestors around me yelled in my defense that I was with media. Yet the officer still chose to use force to get me out of his way.

I spent the night in the ER, luckily with no concussion but a bruised head and arms.

This is a very clear act of POLICE BRUTALITY, ironically what the protestors at the rally were fighting against. I will continue to fight against this so the act of violence does not go unnoticed.

Luckily, I have clear footage of the incident which is posted on my Twitter account and have been receiving unconditional love and support from friends, media members and journalist colleagues.

I should note that my press pass was on me during the events and want to advise any media folks to keep in mind that having credentials does not keep you safe from police violence, apparently.

This is a very clear act of POLICE BRUTALITY, ironically what the protestors at the rally were fighting against.

Thank you for taking the time to read this and a HUGE thank you to all the people reaching out to give me advice on steps to take next and for having my back through this recovery process.

I fell to the ground and down a few stairs onto my right back side. My camera also hit the floor on impact.

After 10 p.m., sheriffs were arresting protestors by the desks one by one as other protestors were being pushed out from the east entrance middle doors. Photojournalist Gabriella Angotti-Jones with City College’s The Guardsman, reporter Joe Rivano Barros with Mission Local, a videographer with the National Lawyers Guild and I were directed by sheriff’s deputies into the left corner by the exit doors, an area where visibility of arrests and protestors being shoved was difficult to capture.

Arrests were being made on the opposite side from us. Pillars were also obstructing our view. Sheriffs had told us that we could stand on the stairs but move no further than the top stair before the desks. We were eventually not allowed to stand on the stairs; sheriffs were telling us different areas where we are able to stand. At one point, one deputy told another, “If they cross this line, they’re coming with us.”

Chief Deputy Sheriff Albert Waters II eventually came to us and clarified where we were allowed to photograph. We were not allowed to move further than the top stair just as before. Waters also apologized after hearing what happened to other journalists during the night. Visibility was still the same as when they initially placed us in the corner.

Near the final push to force protestors out, I had asked a deputy if I could exit the building so that I can photograph the protest. I explained that our visibility in the area was being obstructed. The sheriff agreed and said he would open the right side doors for us.

The doors were locked and blocked with a barrier on the handles. The sheriff said he could not open the door because of the damage that had been done to the glass window of the left door; no damage was done to the right door.

I asked if I could exit through the other side. The sheriff’s deputy agreed and said he would be back. He said he was going to ask and get help so that we could leave. He never came back.

Several minutes later, a few deputies opened the doors in the corner that we were placed in. I asked them if I could leave, and they hesitated to answer. I started to make my way out as I noticed their hesitation; they allowed me to leave after realizing I was already halfway through the doors.

I was wearing two press credentials during the entire protest and time of the incident. Credentials were issued by El Tecolote, a San Francisco newspaper, and the SF State Journalism Department.

Sana Saleem, a reporter and photographer with 48 Hills, was shoved against a desk by a deputy and sustained bruised ribs even after repeatedly identifying herself as a member of the media.

Natasha Dangond, a photojournalist with CCSF’s The Guardsman, was hit in the head with a baton by an SF sheriff’s deputy and sustained bruises on her head and arms.

Gabriella Angotti-Jones, photojournalist with CCSF’s The Guardsman and El Tecolote, was arrested even though she had a visible press credential hanging from her neck. She was let go after surrounding protestors and I yelled, stating that she was a member of the press. 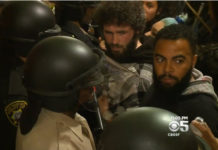 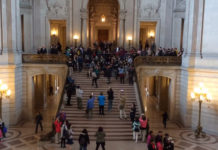