Treasure Islanders who speak out about the radiation, chemicals, asbestos, lead and mold sickening John Stewart’s market rate renters and formerly homeless subsidized renters alike know they face swift retaliation engineered by the powers-that-be – wealthy, connected politicians who fear protest will alert potential buyers of mega-developer Lennar Corp.’s high rise and luxury condos to the toxins lurking in the groundwater of the liquefaction-prone island as they gaze at San Francisco Bay’s fabulous views.

Mitchell Herrington, the second in our series of four courageous Treasure Island whistleblowers

The truth about the radiation and chemicals poisoning Treasure Island has been deliberately hidden from view since 1941 when the Navy eminent-domained the man-made landform from San Francisco for the war effort and began dumping toxic trash in its soil. To conceal the extent of the toxicity and the poisoning of many sailors and civilians, recent plans to redevelop the island, have “inspired” powerful investors to shroud activities there in the thick fog crawling under the Golden Gate Bridge.

The following stakeholders in the island’s lucrative future share a kind of mind-meld which results in a media blackout that obscures the extent to which Treasure Island toxins make current residents ill and which could sicken condo owners to come. These are the U.S Navy, Lennar Corp., Treasure Island Development Authority (TIDA), Treasure Island Homeless Development Initiative service providers (TIHDI) and The John Stewart Co. – even regulators for the Environmental Protection Agency (EPA) and the Department of Toxic Substances Control (DTSC).

Many keepers of the playbook from which these cover-up strategies are drawn are people who appear to have a direct financial interest in Treasure Island redevelopment. Let’s name names:

If a resident like Kathryn Lundgren, one of the four courageous whistleblowers, insists it is wrong to house people during the Navy’s ongoing cleanup operations which poison neighbors in their island homes, the members of this powerful consortium use their combined influence to wield like a club the unstated threat that terrifies every housed family in America – eviction. In San Francisco’s out-of-control housing market with its astronomical rents, complainers know they could well end up homeless on city streets.

The fact that San Francisco mainstream reporters have written in depth about only Lundgren remains the smoking gun evidence that strict media control is exercised to forcefully suppress exposure of these atrocities and hide them from public view. But there are other whistleblowers, and we are introducing them to you here. In the face of swift and certain retaliation, they stood up to the powers-that-be.

Reading stories of these four brave San Francisco citizens, you will observe the Machiavellian torture methods inflicted upon them that are lockstep, predictable, machine-like, as if programmed and plucked from a “take-no-prisoners” warfare tactics list.

Each individual whistleblower comes from a different walk of life. Their pre-existing circumstances colored the kinds of retribution they faced when, compelled by personal ethics and righteous indignation, they succumbed to the overwhelming need to tell the truth.

Kathryn Lundgren, well-known Treasure Island whistleblower, has fearlessly faced the media, exposing radioactivity, chemicals, the ubiquitous toxic mold saturating the entire community’s townhouse walls inside and out, and the fecal matter pouring from island pipes onto islanders’ kitchens, bathrooms, bedrooms and living room floors. This summer, 2016, following another of John Stewart’s defaulted mold remediations, Kathryn’s labored breathing, exacerbated by the recurrent fungus, became intolerable. She was rendered temporarily homeless when she had to sleep outside in a tent.

The community is kept nicely in line when people observe that the John Stewart rental agency and TIHDI housing providers often carry the threat of homelessness beyond their neighbor’s torture to actual eviction. John Stewart renter Mitchell Herrington and Catholic Charities client Andre Patterson are former Treasure Islanders who became two such examples. 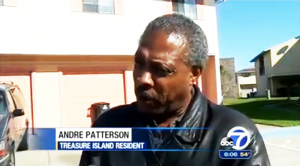 In 2013, a judge evicted Andre Patterson, after his Shelter Plus Care funding administrator manipulated Andre’s subsidy conditions to create the impression he had refused housing. Channel 7 News had just interviewed Andre about island radiation.

Felita Sample reported sexual harassment by a Catholic Charities property manager. In addition, her Shelter Plus Care payee inappropriately dipped into her daughter LaKrista’s father’s death benefit money to pay the family’s rent subsidy, then refused to return the “hijacked” money. Felita Sample’s crime? She had appeared with Andre Patterson in the 2013 Channel 7 News video.

We are presenting here Mitchell Herrington’s story, our second in the series of four. Felita Sample, and Kathryn Lundgren’s stories will be presented separately and linked to this article in future issues.

Andre Patterson’s story was published at this link on July 2016: http://sfbayview.com/2016/07/treasure-island-whistleblowers-face-immediate-retaliation-from-power-broker-consortium/.

Mitchell Herrington acquired a law degree, but, instead of launching a career as a practicing attorney, went into business for himself. He lived on Treasure Island from 1999 to 2013, when he was harassed off the island by eviction.

During his John Stewart tenancy, Mitchell lived with a roommate who worked for Shaw Environmental and Infrastructure, Inc., which has now become Chicago Bridge & Iron.

The fact that this Shaw employee had to be protected by a hooded hazmat suit suggested the serious danger of radiation and chemical contamination present in his cleanup zone work. The roommate disclosed to Mitchell that Shaw found cesium-137 emitting radiation at significant levels near Lester Court at the point where the island cuts a corner along a popular perimeter jogging path.

His roommate told Mitchell that a person jogging over that pinpoint location would receive a damaging dose of radiation as high as a four-hour plane flight. Mitchell quietly “settled the issue,” whistle-blowing to the appropriate entity who dealt with the problem.

The spot has since been swallowed up inside the Westside Solid Waste Disposal Area, a large radiation cleanup zone spanning a sizable section of the San Francisco Bay waterfront opposite the City. To date we can find no mention of this cesium-impacted location in the Navy’s CERLCA remediation reports online, nor have we observed the issue being aired during the Navy’s bimonthly Restoration Advisory Board meetings.

Mitchell learned that the Navy dipped these metal markers in cesium-137 and used them as part of a training exercise in which sailors hosed a liquid radiation solution from the deck of a mock ship called Pandemonium One. The markers were then buried in Treasure Island soil. Furthermore, during dousing operations, the Navy failed to secure the cesium-filled buckets. Radioactive liquid splashed out, soaking into groundwater where it remains today in residents’ yards and under homes along Gateview Avenue.

When Mitchell began to take action, he encountered an immediate backlash. Over a two-year period, roughly 2009 to 2011, Mitchell reported: “I was harassed and evicted for proposing a rent strike. The multiple attempts to evict me were in retaliation for my advocacy for people being contaminated on Treasure Island.”

He was relentlessly hammered. Lies, slander and gossip “labeling him as a crazy” were circulated. A fellow renter and sympathetic witness for Mitchell verified that he was targeted and scapegoated by “friends” who turned on him when they saw it was to their advantage to go along with island movers-and-shakers. Former friends reported on him to island heads and set him up to be steamrollered into an eviction.

Mitchell reported: “I was harassed and evicted for proposing a rent strike. The multiple attempts to evict me were in retaliation for my advocacy for people being contaminated on Treasure Island.”

Before his final eviction, he remembers up to 10 attempts to toss him into the street.

His own health was suffering. He felt constantly sick and was sleeping 12 hours a night. Recently, the Navy announced two “small, discrete” dig sites where they plan to remove PCBs (polychlorinated biphenyls) situated near Mitchell’s former Keppler Court home. Mitchell’s heart really broke when his cat died of cancer.

They are heartless, he said. They tried to kick him off the island while he was undergoing chemo. They finally succeeded.

Mitchell wants to open to public exposure John Stewart Co.’s inhumane behavior, the constant “complaints of harassment and poor living conditions, the extent of their unlawful detainer filings and evictions.” He needs it widely understood that The John Stewart Co. (JSCO) is “the biggest corporate welfare recipient in the state, dealing largely with the public trust and operating as a for-profit enterprise,” and that the company gleans vast profits from housing subsidies, SSI and welfare. This poverty pimp dips into the subsidy cookie jar while contributing liberally to political campaigns.

Asked what bothers him most, Mitchell answered: “They are using federal funds to finance a development deal for big Democratic Party donors like Lennar and John Stewart. This is the Democratic Party that doesn’t care who they contaminate in the process of winning elections.

Mitchell wants to open to public exposure John Stewart Co.’s inhumane behavior, the constant “complaints of harassment and poor living conditions, the extent of their unlawful detainer filings and evictions.”

“This would not seem unusual at all in some corrupt banana republic, but this is happening in the USA, in allegedly the most liberal city in America,” said Mitchell.

“Poor people paid for Treasure Island all along. They are using federal housing subsidies, ripping off Section 8 to pay for this development deal,” said Mitchell. In fact, both in the past and present, John Stewart market rate rents and TIHDI subsidy money has been employed to develop and maintain the island.

“It’s all poverty pimps,” said Mitchell. Even Catholic Charities officials “began hammering people when the subject (of a rent strike) came up.”

Moderate income small entrepreneurs have not escaped. TIDA is staying solvent through small business leases. Storage yards and wine enterprises proliferate. Some business owners, however, have told me that recently their rents shot up through a jerry-rigged utility charge system.

“Poor people paid for Treasure Island all along. They are using federal housing subsidies, ripping off Section 8 to pay for this development deal,” said Mitchell.

Mitchell believes TIDA (Treasure Island Development Authority), TIHDI (Treasure Island Homeless Development Initiative), and JSCO are conspiring together to subjugate the people of Treasure Island and to hide the truth about what is actually happening there. “What’s the legal definition of a conspiracy,” he asked, and he Googled the quick answer: “Two or more people working together to defraud or commit a crime.” Codified in state and federal statutes, conspiracy is defined more broadly as “an agreement between two or more persons to engage jointly in an unlawful or criminal act or an act that is innocent in itself but becomes unlawful when done by the combination of actors.”

When Mitchell left the island he immediately felt better, health-wise. “Then and now, I keep focused on foods that prevent cancer, which has been my biggest worry since living there.”

Mitchell presently lives out of state and has a satisfying job. The eviction turned out to be his good fortune. His future is bright. He recovered from his Treasure Island nightmare in far better shape.

Carol Harvey is a San Francisco political journalist specializing in human rights and civil rights. She can be reached at carolharvey1111@gmail. com.