“Cream” is a political and socially conscious short that is set in Oakland in 1968, at the time of the assassination of Dr. Martin Luther King. The film deals with identity, self-respect and knowledge of self in a Black family setting.

What makes it even more interesting is that this was a time of turbulence, re-learning and re-shaping of the Black identity collectively on a national level. Rarely do we look at this phenomenon from an international lens, which is what the South African-born filmmaker Alexandra Lebona is attempting to do.

Although there was no mention in the film of Lil Bobby Hutton, the first Panther to lose his life after being assassinated in Oakland two days after King was assassinated in Memphis, I think that the film can be a useful tool in the perennial war against colonizer-imbued self-hate among Black people in this country. Check out filmmaker Alexandra Lebona as she talks about her film, “Cream,” which has been selected to screen at the San Francisco Black Film Festival.

M.O.I. JR: What made you come up with the concept of “Cream”?

Palesa Lebona: Living in the digital world, we are constantly bombarded with messages – especially women – on how we should look to be considered beautiful and accepted in society through clothes, body shapes, hair and especially skin. In some cultures, this is seen through the tone of one’s skin – i.e., being light or fairer skinned – and can even translate across social class, where the more fair skinned you are, the more worthy you are within society.

Growing up as a dark-skinned Black girl in South Africa, I was exposed to this very notion, which made me feel ugly and insecure about myself. I and many others across the world still struggle with this inferiority complex. Inspired by my struggle, I wrote “Cream” to remind people as well as myself to love and embrace the skin that you are born in, even when the world tells you not to.

Inspired by my struggle, I wrote “Cream” to remind people as well as myself to love and embrace the skin that you are born in, even when the world tells you not to.

M.O.I. JR: Why did you open it with the assassination of Dr. King?

Palesa Lebona: The late 1960s was a very pivotal period within civil rights in the U.S. and a huge part of the moment was Dr. King. He stood for unity, equality and justice for all irrespective of color and creed. His assassination was a huge devastation to the movement and created a lot of fear and anxiety leading to a period of violence and chaos. Opening with his death was to set the turbulent tone of this period and the plight of being an African American within society at that time.

M.O.I. JR: What is the connection that you were making between hair, politics and identity in the Black community of Oakland in 1968?

Palesa Lebona: Politics is all about power, and to have power one party needs to be conquered and the other the conqueror. The best way to conquer people is to make them hate themselves, and one of the most effective ways to do so is by making them hate their physical appearance, for example, their hair.

Hair has and will always be a huge topic regarding beauty and identity within the Black community across the world. Different races have different textures of hair but the natural texture of Black people’s hair – thick and rich – was associated with negativity whilst that of people who are white was seen as something to strive for.

The best way to conquer people is to make them hate themselves, and one of the most effective ways to do so is by making them hate their physical appearance, for example, their hair.

This very warped idea symbolized the battle of the Black community to embrace, preserve and fight for their Black heritage and all that comes with it or keel over and bow down to another race.

M.O.I. JR: Why did you make the Black Panthers part of the film?

Palesa Lebona: I made the Black Panthers part of the film because they symbolize the strength of Black power and Black consciousness to this day, especially during the Civil Rights Movement: a small yet very powerful organization fighting to help preserve, grow, empower the Black community at all costs, because the vast majority of the population including the government did not want to do so.

M.O.I. JR: How did you come up with the dialogue?

Palesa Lebona: My screenwriting teachers were very helpful in guiding me on how to approach dialogue as per the following tips:

M.O.I. JR: What message do you want people to get from your short?

Palesa Lebona: Love and embrace the beautiful skin you’re born in and embrace your uniqueness, even when the world tells you otherwise.

M.O.I. JR: How do you feel about being selected to show your film at the SF Black Film Fest?

Palesa Lebona: I’m beyond the moon! I feel blessed, humbled and honored to be selected as part of such a prestigious yet culturally conscious film festival.

M.O.I. JR: How can people stay up with you and your work? 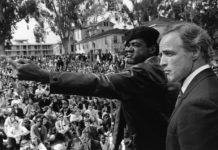