We are writing to ask you to join with California Coalition for Women Prisoners (CCWP) in our statewide campaign to DROP LWOP and secure sentence commutations for all those serving Life Without the Possibility of Parole (LWOP). LWOP is an inhumane sentence which denies people the possibility to rehabilitate and change.

Will you join us? We are looking for organizations and individuals to sign on to the letter below as a first step in expressing support for this campaign. Please feel free to contact info@womenprisoners.org or 415-255-7036 x4 with any comments, questions or concerns.

As grassroots, advocacy and social justice organizations, we are writing to urge you to commute the sentences of all people serving Life Without Parole (LWOP) in California’s prisons to parole-eligible sentences.

Life Without Parole sentencing is increasingly being challenged and limited across the United States. We believe that life without parole is inhumane. It denies that people have the capacity to change, grow and be rehabilitated and thus is known as “the other death penalty” by those serving it and by their families.

As you know, many states, including California, are legislating against sentencing youth to Life Without Parole. (See Senate Bill 9: Fair Sentencing for Youth. http://fairsentencingforyouth.org/legislation/senate-bill-9-california-fair-sentencing-for-youth/.) Now it is time to take action to mitigate the impact for all people sentenced to die in prison due to this endless punishment. While commuting a sentence does not guarantee release from prison, it does guarantee that each person will have the right to see the parole board in their lifetime, rather than being sentenced to a “living death.” 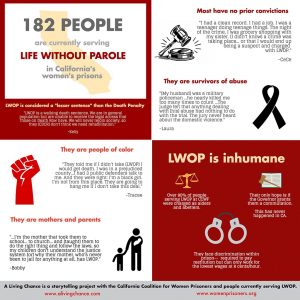 Data gathered by CCWP members incarcerated at Central California Women’s Facility and California Institution for Women reflects national statistics reported by the ACLU that nearly 60 percent of people in women’s prisons nationwide are survivors of physical or sexual abuse, and that survivors make up 94 percent of the population in some women’s prisons. See “Prison Rape Elimination Act of 2003,” American Civil Liberties Union.

Additionally, the majority are first-time “offenders” and had no record prior to being sentenced to Life Without Parole.

All 5,000 people serving LWOP in California prisons are subjected to institutional discrimination; for example:

We urge you to take a bold stance against Life Without Parole sentencing and let California serve as a model for the rest of our nation. Please continue to take leadership on this issue and commute all those sentenced to LWOP to parole-eligible sentences, initiate a process to eliminate life without parole from the California penal code, and provide people sentenced to LWOP with opportunities for rehabilitation and redemption.