At the March 2018 Treasure Island Restoration Advisory Board meeting, remediation project manager Dave Clark “recollected” that, between 2006 and 2016, the Navy unearthed 1,280 radiological objects, one for every two residents.

Dave Clark, remediation project manager, “recollects” that, from 2006 to the present, the Navy unearthed 1,280 radiological objects.

By contrast, on Sept. 13, San Francisco Chronicle reporters announced the “startling” discovery at Hunters Point of a single “radium deck marker about the size of a silver dollar” near condos on 75-acre Parcel A, which was transferred to the city in 2004 – startling because “contamination … was cleaned up years ago.”

A Hunters Point resident remarked off the record, “On Treasure Island, they’re burying the evidence under thousands of cubic tons of dirt. But, just like at Hunters Point, radioactive objects will work their way up through the soil a few years down the road.”

As the media firestorm and Treasure Island’s non-appearance on the National Priorities List of Superfund Sites blocked public awareness of Treasure Island’s high toxicity, the island became the last best hope for the City’s housing crisis. 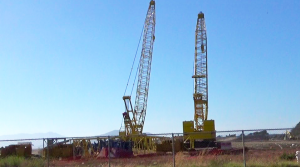 Redevelopment is in full swing. Vibro-compaction cranes bearing pulsating bores intended to settle and harden the soil against earthquakes and ocean rise, crook like yellow elbows above the shoreline where a ferry terminal is planned.

Between 1941 and the 1980s, the U.S. Navy saturated Treasure Island with radiation, chemicals, and the heavy metals arsenic and lead.

The Navy’s 2006 Historical Radiological Assessment documented that Tetra Tech, in its roles as subcontractor and later Treasure Island lead contractor, “remediated” radium-226, a bone-seeking carcinogen with a half-life of 1,600 years, as well as plutonium and cesium-137 that persist centuries longer. Chemicals the Navy dug from Treasure Island soil consisted of nine of the world’s most dangerous “dirty dozen”: Heptachlor, Hexachlorozene, DDT, Dioxins, Benzenes, Dieldrin, Furans, Endrin and PCBs.

Chemicals and heavy metals like lead can cause childhood mental retardation. In 2016, the Navy conducted lead excavations. Seeping through cracks in 50-to-70-year old island pipes, polluted water pours through faucets and shower heads.

Residents report scaling rashes on shoulders, backs, trunks and extremities. “For lead poisoning, Treasure Island is like Flint, Michigan, only worse,” one observed.

After 2013, residents stopped trusting reassurances that the island was safe. A handful of tenants raised hell about the Navy’s faulty “cleanup.”

They questioned the integrity and viability of the Treasure Island Restoration Advisory Board, a community group monitoring the Navy’s ongoing hazardous waste remediation.

Board members were overheard joking that the Navy is cleaning the island to the low EPA standard of “your average coal mine.”

Despite protestations by RAB members that they are not “paid,” during the 2015 forced Yerba Buena Island evictions, one member’s family was relocated from the safety of YBI to preferred housing on Treasure Island’s southwestern shore with its stunning views of San Francisco and the Golden Gate Bridge.

The board has been called racist. A bloc of Caucasians and one Asian “represent” the island’s largely Black and Brown population.

After unhoused San Franciscans were brought to the island 20 years ago, poor HUD-subsidized white and people of color have lived within feet of remediation zones.

Since February 2014, when the San Francisco Bay View newspaper began attending RAB meetings, the Navy has been observed engineering disincentives to resident participation. False information about meeting times, public undermining of residents’ comments with eye-rolling, intimidation and shaming seem intended to drive residents away. Only two tenants sat in the audience by the September 2018 meeting.

After the Hunters Point scandal broke, a bevy of activists – an environmental program director, a union advocate and an attorney with three whistleblowers in tow – stormed Treasure Island’s March RAB session, protesting the Navy’s continued employment of Tetra Tech.

“With a straight face the Navy trusts (Tetra Tech) here at Treasure Island, where they seem to be helping to run the show and claiming everything’s safe?

“I pay your salary,” Angel said. “So, I’d like to know … why my tax dollars are being spent to pay Tetra Tech’s fat salaries when a couple of miles from here (at Hunters Point) your own agency, the U.S. Navy, says they lost confidence in Tetra Tech and the (faked) data. If I did what Tetra Tech apparently did, I’d be locked up in jail.”

Steve Zeltzer asks, “What is going on here?”

“What is going on here?” asked Steve Zeltzer, United Public Workers for Action.

Castigating the Navy for putting people in danger on a highly contaminated site, Zeltzer cited the coverup and firing of Tetra Tech employees turned whistleblowers.

“Any other (entity) who falsifies federal government information stops getting contracts.”

He called the expenditure of hundreds of millions of wasted dollars “a fraud and a scam on the people of San Francisco and the United States.”

Attorney David Anton testifies that starting in 2007, soil was accidentally or intentionally not scanned for radiation, unscanned soil was moved around and off the island and manifests for radioactive material designated it not radioactive. This malfeasance was due to contractors’ orders, lack of proper oversight, and/or the need to speed up the work.

Whistleblower Robert McLean testifies that on weekends, the contractor Shaw moved soil and dug “without radiological coverage” in areas where digging was prohibited. Soil containing elevated cesium-137 was sent to Hunters Point where Tetra Tech’s lab “deemed there wasn’t anything in it.”

Whistleblower Guy Taibi, a Treasure Island radiation safety officer with 30 years’ experience, testifies that after the California Department of Public Health ordered the Navy to redo its faulty 2006 HRA remediation, the Navy neglected to scan debris pits for radiation. After he complained, they began scanning. But when elevated radiation was found, they stopped the work.

In his July 5, 2018, SF Bay View article, Steve Zeltzer revisited Congresswoman Pelosi’s and Sen. Dianne Feinstein’s “deep financial connections” to the twin developments at the Shipyard and Treasure Island. He noted both that a company of Feinstein’s husband, Richard Blum, holds the primary contract to build Treasure Island condos and that Congresswoman Pelosi’s nephew, Laurence, was a Lennar executive “in charge of real estate acquisitions” – while she was pushing for the development and getting hundreds of millions for the “cleanup.”

In preparation for the June and September RAB meetings. the Navy also “reinvented” itself.

Rebecca Cardoso replaced Keith Forman in his long-held role as environmental coordinator and RAB co-chair. She lasted through the March and June meetings.

A third BRAC coordinator appeared in September. Reginald Paulding claimed a Bachelor and Masters and 19 years’ experience in environmental engineering, restoration work on San Diego’s Naval Base Point Loma, and seven years with the Base Realignment and Closure (BRAC) office. The youthful Paulding betrayed a superficial knowledge of the island, its history and the cleanup.

I noted during public comment, that Treasure Island is an official Superfund site, and I read its US EPA Superfund identification number, CA7170023330, into the record. The omission of Treasure Island from the National Priority List (NPL) of Superfund Sites means that online searches conceal from potential renters and homebuyers Treasure Island’s history of high toxicity.

Treasure Island is a Superfund site

This video quickly and clearly explains what Superfund Sites and CERCLA are and every kind of toxic chemical present at Hunters Point and Treasure Island.

This video shows a huge toxic lake in a radiation cleanup zone within feet of  Treasure Island residents’ homes.

During the September meeting, I noted that from 2014 to 2017, the Navy’s demolition of a row of Bayside Drive townhouses left a huge water-filled lake in one of five major radioactive cleanup zones, the Bayside Solid Waste Disposal Area. Radiation-contaminated groundwater washed under a chain-link fence acting as a “protective” barrier, saturating the soil beneath occupied homes four to six feet away. The 2014 resident of 1224G Bayside Drive joked that he now enjoyed both a lake view and a Bay view.

This is not an isolated incident. Over the 30-plus years that the Navy has been “cleaning up,” similar toxin releases have been documented throughout the island, mostly in the community.

In August 2018, a Navy leaflet announced the September demolition of 1126 Reeves Court and 1217 Mariner Street townhouses constructed by the Navy in 1965. Both of these former military and civilian homes were built on the most toxic part of the island sandwiched between four large solid waste disposal areas.

During the meeting, I asked Navy officials what they expected to find beneath these structures. Unidentified chemical deposits was the reply.

I asked, “What about the mothers and children who lived in these units for years?” The faces of Paulding, project managers, island director Robert Beck, and RAB members remained impassive.

Though residents with cancers, tumors and diseases attributed to toxin exposure are well-known to their neighbors, their presence is never acknowledged by RAB members, Navy personnel or Treasure Island Development Authority (TIDA) director Robert Beck, apparently out of fear of liability.

At the June 2018 RAB meeting, Rebecca Cardoso referred to the SF Department of Public Health attendees who noted the alarming number of sick islanders.

In an earlier 2014 Navy poster session, I had asked Amy Brownell, SF DPH radiation engineer assigned to Treasure Island, whether longitudinal studies of islanders’ illnesses had been undertaken. Brownell stated the sample was too small. (I asked myself how she knew the sample size of tests that were never done.)

Brownell’s integrity has been questioned at Hunters Point.

Wrote Steve Zeltzer, “A key spokesperson of DPH, Amy Brownell, has been telling the residents of the area that there were no real serious chemicals and toxins at Hunters Point Shipyard; they were getting sick from ‘stress.’” He also reported that “Brownell’s salary, in a deal made by the City and County of San Francisco, (comes from) funds paid by the developer Lennar Corp.”

During the September RAB meeting, Sheridan Enomoto, Greenaction community organizer, reported Brownell insisted radiation signs were posted on remediation zone fences to show testing had been done there. This contradicted Paulding’s assertion that the Navy’s warning signs are intended to keep residents away from active contaminants inside the cleanup zones.

Enomoto also highlighted the first principal of environmental justice: namely, that community members have the right to speak for themselves.

Maloof, however, accomplished her appointed task. She opened the meeting with false claims that the group had agreed to rules of “decorum.” By the end, she had shortened the communities’ 2-to-3-minute remarks.

Said Enomoto, addressing TIDA’s and the Navy’s perceived nonresponse and abuse of power over trapped tenants without a voice, “The Navy and Bob Beck can speak for themselves but Bob Beck from TIDA seems to be religiously looking at his phone every time I see him (at a meeting).”

The threat of homelessness stops residents from speaking on their own behalf. The John Stewart Co., a TIDA partner to whom redevelopment will bring millions, has evicted tenants who protested the company’s HUD-subsidized substandard, contaminated housing.

It would help if San Francisco citizens visited the Treasure Island RAB and TIDA Board meetings in defense of beleaguered tenants’ environmental rights and witnessed and supported efforts of regular attendees holding the Navy and the RAB’s feet to the fire.

RAB meetings are held four times a year: March, June, September and December. The Dec. 11, 2018, Treasure Island RAB meeting will be held from 7 to 9 pm in the Shipshape building, 850 Avenue I.

TIDA Board meetings are held the second Wednesday of each month at 1:30 p.m. in City Hall Room 400.

Check the Navy BRAC site for changes in the schedule.