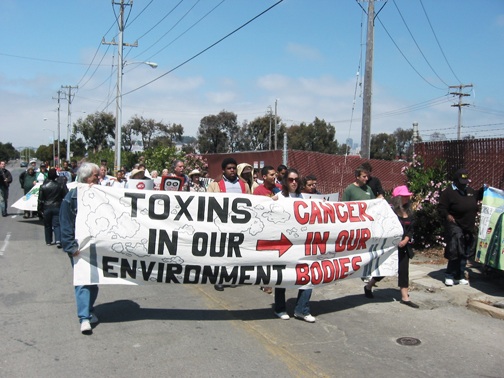 Chanting the slogans, “What do we want? Justice! When do we want it? Now!” and “We wanna be asthma free, shut down PG&E!” about 150 people marched Saturday from the PG&E Hunters Point Power Plant to Parcel A of the Hunters Point Shipyard, two glaring eyesores of environmental injustice and neglect that have long plagued San Francisco’s Bayview Hunters Point community.

The BVHP community achieved a major victory last spring, when after years of grassroots struggle it finally managed to shut down the Hunters Point Power Plant, one of California’s oldest and dirtiest, that had been in operation for almost 80 years. But the work isn’t over. Major cleanup efforts still lie ahead, and members of the community want to ensure it is done safely and properly.

The community has also drawn increasing attention to the wrongdoings of Lennar Corp. as it rushes to complete construction of 1,600 homes at the Hunters Point Shipyard. But there is a reason it is rushing, and as Marie Harrison, long-time community activist and Greenaction member said, “Today, you’re going to hear a few truths.”

The most eloquent of those truths came from two people in particular — Dr. Ahimsa Sumchai, M.D., the only Black woman candidate running for mayor of San Francisco, and Minister Christopher Muhammad of the Nation of Islam, who runs a school that is located next to Lennar’s worksite.

“This shipyard has an incredible history,” said Sumchai. “You can go back 2,000 years, when the Muwekma Ohlone Indians revered this land. In the 1700s, Spanish explorers found this promontory and said this would be a beautiful seaport. In the late 1700s, a family called the Hunters occupied this land and it became Hunters Point.

“In the pre-World War II era, prior to the bombing of Pearl Harbor, the components of Little Boy, the bomb that was dropped on Hiroshima, came to this shipyard. It was assembled and sent to the Southern Pacific.

“Prior to the bombing of Hiroshima, the Navy purchased this land and went to Louisiana and Texas and recruited hundreds of strong African American men and women, promised them jobs and brought them to settle in this area where I grew up,” said Sumchai.

Turning to Lennar’s recent activities, Sumchai’s politics came into focus. “We have to fight to control this property. We have to be stakeholders at the table of what goes on in the development of not only this property but other properties throughout southeast San Francisco.

“On Nov. 7, 2007, when I am elected mayor, the revolution is going to come and life is going to be a whole lot easier for you because you’re going to have somebody in the mayor’s office who is going to have the strength to shut down Lennar Corp. and send them back to Miami, Florida,” said Sumchai to audience cheer and applause. 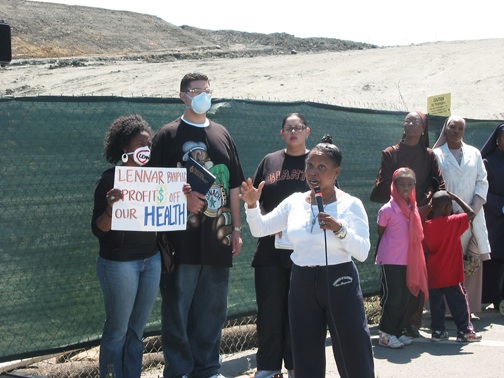 Minister Christopher Muhammad spoke next. “San Francisco represents itself to the world as this liberal bastion of hope and possibility. But right in the southeast corner is a dirty little secret that they never wanted to get out. But it’s getting out.

“Lennar’s goal is to fasttrack this project so that by the time anyone got any information about it, the homes would have already been up and it would have been considered old news because they know the latency period of asbestos [exposure] is 20 years,” he said.

Since Lennar began its work on Parcel A last spring, there have been 66 exceedances of the 16,000 structures per cubic meter safety threshold for airborne asbestos set by the San Francisco Department of Public Health. If asbestos levels exceed that amount, work on the site is supposed to shut down. But it hasn’t.

“The only time the Health Department has shut down Lennar was this week. But why?” asked Minister Christopher. “Because Lennar’s dust went over into Navy property, and that constituted a notice of violation. Not because the dust went over into the poor community – we don’t shut you down for that. We shut you down because you violated Navy property with abandoned buildings where people don’t even live anymore. This is called environmental racism.”

Throughout the rally, water trucks were busy spraying down the Lennar worksite. Lennar reportedly spends about $50,000 on water per week to keep asbestos-laden dust clouds from escaping the site. At one point, a Hertz water rental truck interrupted Minister Christopher as it came down the hill, spraying water onto the street above the rally. “I mean they’re going all out to prove to you that they’re doing something right. But it’s a year too little and a year too late,” he said.

“Our aim is to connect this movement for environmental justice to the movement in West Oakland, in Richmond and in the South Bay so that all of these groups that have been disconnected can now come together as one to fight for environmental justice for all of us. Regardless of where we live, how much money we have, it doesn’t matter. Justice for all or justice for none,” said Minister Christopher.

In a show of solidarity, members from Greenaction, MAC (Mother’s Against Crime), the West County Toxics Coalition, the Nation of Islam, PODER (People Organizing to Demand Environmental and Economic Rights), Literacy for Environmental Justice, ANSWER (Act Now to Stop War and End Racism) and the San Francisco Green Party took part in the rally.

Bradley Angel, executive director of Greenaction, spoke of an important upcoming event. “On Sept. 6 and 7 the EPA will be having a national workshop about environmental justice, about how they collaborate so well with communities. This is a surprise to me and a lot of other people,” said Angel.

At noon on Sept. 6, Greenaction, the West County Toxics Coalition and others are going to protest this invitation-only conference. The San Francisco EPA office is located downtown at 75 Hawthorne St. For more information, call Greenaction at (415) 248-5010 or check cepheus_1@msn.com.

Chris Brizzard is an intern at the Bay View. Contact him at cepheus_1@msn.com.