Environmental justice demands the cessation of the production of all toxins, hazardous wastes, and radioactive materials, and that all past and current producers be held strictly accountable to the people for detoxification of the contaminant at the point of production.

“The environmental conditions that poison our water and contaminate our air are not contained within national boundaries.” – U.S. Surgeon General Richard Carmona, Call To Action On Global Health 2006

I attended the May 21, 2008 of the Board of Directors of the nine county Bay Area Air Quality Management District and applaud their overwhelming approval of new regulations to impose fees on businesses that emit carbon dioxide and other heat trapping gases linked to global warming.

The 15 to 1 vote to subject power plants, oil refineries, hospitals, airlines and other polluting factories and industries to an emissions fee is expected to strengthen a national precedent when implemented in July of this year. Bay Area power plants and oil refineries will bear the greatest brunt of financial responsibility for the Air District’s “polluter pays” regulations.

Under the BAAQMD’s plan to charge companies 4.4 cents per ton of carbon they emit, Mirant’s power plant in Potrero Hill will pay $11,000 in emissions fees for the 247,000 metric tons per year of greenhouse gases it belches into the sky over southeast San Francisco.

According to the Eastern Neighborhoods Community Health Impact Assessment, September 2007, Mirant’s power plant in Potrero Hill is the single largest point source pollution site in San Francisco. The Mirant Power Plant has three dirty diesel turbines that generate only 3% of its electrical output. Shutting down these 3 diesel turbines would reduce air pollution to levels similar to those projected by the proposal to site three combustion turbine (CT) peaker plants in southeast San Francisco.

According to data from the Bay Area Air Quality Management District included in the document, “Environmental Impact on the Community: Air Pollution in Bayview Hunters Point, the 94124 zipcode ranks in the 80th percentile for particulates, carbon monoxide, nitrogen oxides and volatile organic compounds. It ranks in the 90th percentile for sulfur dioxide.”

On Tuesday, May 20, 2008 by majority vote of the San Francisco Board of Supervisors, a plan to borrow $273 million to site three CT peaker plants to replace the Mirant plant was postponed to allow time to explore retrofitting Mirant to run on natural gas and shutting down it’s diesel generators.

District 10 Supervisor Sophie Maxwell and Board President Aaron Peskin  promoted the CT peakers with the false assertion that they are less polluting than Mirant. An analysis conducted by College Board Trustee and Sierra Club Executive member John Rizzo concludes that the CT peakers running at a maximum allowable rate of 11 hours a day, six days a week will generate more toxic air emissions and greenhouse gases than the Mirant plant.

Energy conservation measures coupled with the implementation of citywide renewable energy programs from solar and wind sources has been proposed as the cleanest alternative to closing the Mirant Power Plant.

A 2002 study called “The Body Burden” found unacceptably high levels of toxins in participants who agreed to be tested. Biomonitoring is research that measures the levels of chemicals in our bodies by analyzing samples of blood, tissue, urine and breast milk. In 2003, a network of public health, faith, labor and environmental health groups known as the California Body Burden Campaign championed legislation to make California establish a biomonitoring program.

That year Sen. Deborah Ortiz, D-Sacramento, introduced legislation that created The Healthy California Biomonitoring Program SB689. Ortiz stated, “Biomonitoring is the next logical, critical step for us to take in addressing threats to public health. Our technology and science at this time in history offer us the tools to identify environmental agents so that we can craft the best public health strategy to enable a better quality of life. It is my hope that this research can lead to more deliberate decision making as we tackle chronic diseases and cancers that are pervasively and frighteningly invading our familes and personal lives.”

“Mirant’s power plant in Potrero Hill will pay $11,000 in emissions fees for the 247,000 metric tons per year of greenhouse gases it belches into the sky over southeast San Francisco.”

This month, public hearings on the implementation of the California Biomonitoring Program were held in Oakland. Nowhere, however, is the need for biomonitoring trials as great as in Bayview Hunters Point where the nine-member Black Caucus of the California Legislature found one of the highest overall death rates and infant mortality rates for Blacks in the state.

UCSF researcher, Dr. Kevin Grumbach stated in a June 9, 1997 Chronicle article “Bayview Hunters Point residents have reason to be concerned about the effect the environment is having on their health,” noting that of 39 pollutants measured by the Bay Area Air Quality Management District in San Francisco neighborhoods, the highest concentrations – 20 pollutants – were found in Bayview Hunters Point.

In June of 1997, Grumbach and Dr. Tomas Aragon of the Health Department released the findings of an analysis of DPH records which found that hospitalization rates for asthma, emphysema and congestive heart failure in Bayview Hunters Point were 138 per 10,000 compared to a statewide average of 37 per 10,000. Rates for hospitalization and premature death for children were found to be markedly higher in Bayview Hunters Point.

Grumbach noted BVHP contains four times as many toxins as any other city neighborhood, had 700 hazardous waste material facilities, 325 underground petroleum storage tanks and two Superfund sites, including the Hunters Point Naval Shipyard. He called the environment “the smoking gun.”

Health Director, Dr. Mitchell Katz testified to the Board of Supervisors in support of citing the CT peaker plants in southeast San Francisco in October of 2007. Additionally, Katz opposed a temporary halt to grading and construction activities at Lennar’s Parcel A construction site stating in a powerpoint presentation to a July  2007 public hearing of the Board of Supervisors and, again, to an October 2007 hearing of the Board of Education that “dust exposure does not cause asthma.”

In clear refute of  Dr. Katz’s opinion, the California Air Resources Board released a report in March of this year which attributed the excess burden of disease seen in West Oakland residents  to “diesel particulates” from vehicles, construction dust and industry at the Port of Oakland. In response, the Alameda County Health Director asked the Port to assume responsibility for its adverse impact of its activities on over one million people living adjacent to it.

In a similar action in Fresno this month, the Air Resources Board approved a plan to clamp down on airborne dust, smoke and soot which it describes as “microscopic pollution particles linked to thousands of early deaths in the San Joaquin Valley every year.” 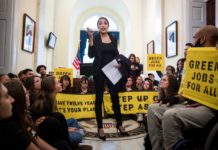