Ileana Ros-Lehtinen, a representative in Congress from the State of Florida, and Chairwoman, Subcommittee on International Operations and Human Rights: I am very happy that we have for her opening statement the person who is really driving this hearing and who has called for and demanded this hearing for a long, long time because she has been so worried and desperate over the situation in the Congo, my good friend, the Ranking Member, Cynthia McKinney of Georgia. Ms. McKinney: Thank you, Madam Chair. I definitely appreciate the fact that you are allowing us to call this important hearing today and to hear from our witnesses who have contributed now, who have dedicated now a vast amount of time, energy, effort, part of their lives into setting the record straight, securing the truth, first of all, and then trying to help the Congolese people to finally have the ability to determine for themselves their own government and how they will steward their own resources.

We have the opportunity to pass judgment on the Clinton legacy and make a finding as to exactly what Madeleine Albright and her foreign policy team have done to the Great Lakes region.

I think it is also important to point out at the outset that the U.S. and Belgium deserve special condemnation for the 37 years of suffering in the Democratic Republic of Congo because it was their intelligence services who conspired to assist in the murder of the democratically elected President Patrice Lumumba. The West chose Mobutu to replace him, and for the next three generations Zaire, as it was then known, was placed in the grip of a corrupt and evil leadership.

Despite the mining of billions of dollars of minerals and other resources, DRC has been left by Mobutu nearly bankrupt and on the brink of collapse. The corporations and the Western businessmen who traded with Mobutu never once called on him to be put in order. Instead, they celebrated in his fabulous homes and enriched themselves at the expense of the Congolese people. 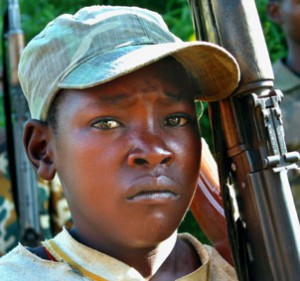 Rwanda, Uganda and their allies began a war in August, 1998, in the DRC under the claim of fighting the Hutu interahamwe, the Rwandan militia responsible for much of the killing during the 1994 Rwandan genocide. President Museveni of Uganda and President Kagame of Rwanda have always maintained that by fighting in the DRC they will defeat the interahamwe and in so doing secure their borders and prevent another Rwandan type genocide from occurring.

They continue to maintain this position until this very day, but this Rwandan/Ugandan explanation for their invasion of DRC is a lie. This is not a noble war about saving civilians from genocide or about protecting democracy from tyranny. Instead, this is a war about self-interest and greed.

Despite limp and totally ineffective protestations by the United Nations, the world community has largely stood idly by and allowed these two men to prosecute what can only be described as the most vicious, senseless and bloody war being fought in the world today.

The cost of their actions to the DRC and its people is almost beyond measure. The scale and savagery of the crimes committed by the Rwandan and Ugandan armies in DRC compares to the abhorrent actions of the Nazi assault upon Eastern Europe.

The International Rescue Committee has just released a 2001 survey of the death toll in DRC’s war. For the 32 month period from August 1998 until the end of March 2001, an estimated 2.5 million civilians have died in the DRC. Of those, 350,000 people have died from violence and 2.2 million have died from disease and malnutrition arising from the adverse effects of the war on the region. IRC estimates that on average 77,000 civilians have perished each and every month in the DRC. That is almost 2,500 civilians dying each day for almost the last three years.

Compare those numbers with the lost lives in Kuwait 10 years ago and the world’s response to the Iraqi aggression. The world sent 350,000 troops to the Gulf to defend Kuwait. In 100 days, the combined military, naval and air forces of the Western world had reduced the Iraqi military, one of the world’s powerful armies, to a burning hulk.

Then compare DRC suffering with the 2,000 lost lives in Kosovo two years ago. The combined air forces of NATO pounded Belgrade into submission and then indicted Milosevic for war crimes. We all remember how the Western world responded to the Iraqi and Kosovo humanitarian disasters and flooded them with food, medicine, shelter and other aid.

Similarly, UNICEF had asked for $15 million worth of essential drugs and therapeutic feeding centers, and to date UNICEF has received less than one-tenth of that amount. Incredibly, the principal aid sent by the U.S. to the region has been in the form of military aid to the warring parties.

What we do know is that the U.S. Special Forces and U.S. funded private military companies have been arming and training Rwandan and Ugandan troops to deadly effect. I think it is appalling that the U.S. taxpayer should be directly assisting the military efforts of Rwanda and Uganda, the aggressors in this tragic conflict and who are confirmed by Amnesty International and Human Rights Watch as the authors of terrible atrocities against Congolese civilians. Our efforts in Africa have amounted to nothing more than bankrolling belligerents and mass murders.

What makes this conflict particularly sickening is the role of U.S. and European corporations, together with Rwanda and Uganda, in the plunder of DRC’s resources. The recent U.N. report on the illegal exploitation of natural resources from the DRC made a series of important findings.

The principal aid sent by the U.S. to the region has been in the form of military aid to the warring parties.

Before going on, let me commend Madam Safiatou Ba-N’Daw and the other panelists on the U.N. panel for their work in presenting the U.N. Secretary General with a truly first rate investigative report on the theft of DRC’s resources. The report concluded that there is mass scale looting, systematic exploitation of Congo’s resources taking place at an alarming rate by the armies of Burundi, Rwanda and Uganda.

For example, the report finds that DARA Great Lakes Industry, of which DARA Forest is a subsidiary, is in collusion with the Ministry of Water, Land and Forests of Uganda to export timber from eastern Congo by falsifying the timber’s origins. The countries actively buying this uncertified timber include USA, China, Belgium, Denmark, Japan, Kenya and Switzerland.

In May, 2000, DGLI, the parent of DARA Forest, signed a contract for forest stewardship certification with SmartWood and the Rogue Institute for Ecology and Economy in Oregon of the United States. This program amounted to nothing more than a scheme to facilitate the certification and extraction of illegally acquired timber from the Democratic Republic of Congo.

The same large scale theft of DRC’s resources has been committed with respect to cobalt, gold, diamonds, coltan, silver, zinc, uranium and numerous other minerals. Significantly, DRC has some of the world’s largest deposits of coltan, an important mineral critical for the maintaining of an electric charge in the computer chip industry. The price of coltan varies from $100 to $200,000 a ton, varying on quality and availability. Business in coltan is booming, but it is not the Congolese who are getting rich.

There is an additional and very disturbing report from MISNA, the Catholic news agency, regarding Rwanda’s actions with respect to the theft of DRC’s resources. MISNA reported in February this year that the Rwandan Army is now setting up concentration camps in the Numbi area south of Kivu in order to have sufficient labor on hand to extract coltan and other precious minerals. It was this enslavement of innocent civilians and captured prisoners of war that drew some harsh criticisms against the Nazi and Japanese leadership from the Nuremberg and Tokyo war crimes tribunals.

In response to the findings by the U.N. special panel, the Rwandans have had the audacity to say that the Congolese people are benefiting from the mining trade in eastern Congo and that there has been an improvement in the Congolese welfare, security, health, education and infrastructure. That is almost like saying that the people of Eastern Europe who were enslaved in quarries, underground mines and forced to work in dangerous conditions in automotive and munitions plants benefited from the Nazi occupation of their countries.

Mr. Robert Raun, president of Eagles Wing Resources, a U.S. based company which trades in coltan, was reported to have described the growing trade as capitalism in its purest form.

We need to support the recommendations of the Ba-N’Daw report. We need to end all military support for the Rwandan and Ugandan military forces. Our government should publicly condemn the governments of Rwanda and Uganda for their criminal actions in eastern Congo, and we should demand that an international tribunal be established in the Great Lakes to investigate and prosecute the violations of international law. We should call on our allies and the entire international community to join us in ending the conflict in DRC.

I would end with this. Is it that U.S. military bases in Uganda and Rwanda and easy access to DRC’s resources are worth all of this? Thank you, Madam Chair.

The official Congressional transcript is titled “Suffering and despair: Humanitarian crisis in the Congo.” Aside from changing the title, the Bay View has not altered the transcript except for minor stylistic adjustments to make it easier to read. To tell Rep. McKinney you appreciate her advocacy for the Congolese, email hq2600@gmail.com.