Miriam Makeba, who rallied the world to end apartheid in South Africa, singing traditional songs in many African languages and American jazz as well, has died at the age of 76. Her great legacy of struggle and achievement is recalled in this Al Jazeera retrospective. A good friend of Harry Belafonte since the 1950s, she was forced into exile in 1960 for 30 years, initially in the U.S., where she called American racism “apartheid by another name.” For marrying Stokely Carmichael – later Kwame Ture – in 1968, she was banned from recording and forced to leave the U.S. The couple settled in Guinea, where Makeba became known as Mama Africa. Goodwill ambassador for the U.N. Food and Agriculture Organization since 1999, as recently as March 2008, she visited FAO projects in Congo where survivors of violence and HIV have returned to farming to feed their families and communities. Learn more about her life at BBC. 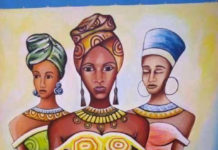