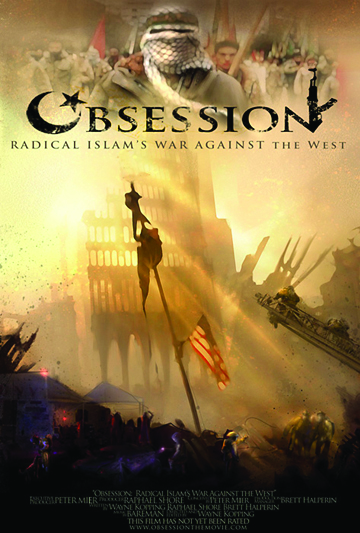 A dangerous little DVD was inserted into newspapers in 70 different cities last month. Titled, “Obsession: Radical Islam’s War Against the West,” it is a deliberately and distortedly frightening view of “radical Islam” that is designed to incite fear into the hearts and souls of Americans. Imagine these Americans now going to a Palin rally and hearing Barack Obama’s middle name spat out. These cannot be coincidences.

To be sure, the “Obsession” film begins with a disclaimer that the majority of Muslims are peaceful. But then, a series of frightening and violent images are highlighted as example of Islam’s war against the West. The hour-long film makes it appear that Islamic forces attack the West, without context. How many of these attacks, no matter how reprehensible, have we provoked?

To be sure, the perpetrators of Sept. 11, 2001, were beyond reprehensible. Instead of apprehending them, though, we decided to go to another country and start a war that is now costing us about a trillion dollars.

Radical Islam does not have to attack the West. We’ve done ourselves – and our economy – damage enough with a war that has caused us to lose esteem and allies all over the world. While most of the world embraces a war against terrorism, the link between Saddam Hussein and Osama bin Laden has yet to be established.

The Clarion Fund, which produced and distributed “Obsession,” spent millions of advertising dollars so that newspapers around the country would include their DVD as a paid insert. In Denver and Dayton, Portland and Philadelphia, Las Vegas and Lansing, readers were treated to a DVD that sells for $12.95 on the Internet.

It costs $4.95 to review the DVD online. And the Clarion Fund claims that 28 million were distributed. If the DVDs wholesale at $5 a piece, the Clarion Fund made a $140 million campaign contribution to those who would connect Obama with “radical Islam.”

Couldn’t they just be pushing a cause? There is the adage, “Timing is everything”.

You have got to question the timing of this distribution in an election that appears to be closer than it ought to be if we simply went on the merits of the candidates. “Obsession” injects fear and apprehension into a campaign that is already full of irrationality and emotion – from the women who were supposed to be swayed by the addition of Sarah Palin to the McCain ticket, to the people who hesitate to vote for Obama because he is of African descent.

Now, there is the fear mongering over radical Islam and a film designed to incite both fear and anger. At a time when we ought to be building bridges, “Obsession” builds barriers between Muslims and others.

A more useful film might compare sections of the Bible with sections of the Koran to understand how much all religions have in common. As I watched “Obsession,” I remembered the taut post-9/11 days in the United States when many Muslims were seen as suspects in 9/11 incidents.

In Washington, D.C., where I lived at the time, Muslim cab drivers seemed to take special care to display an American flag in or on their car to indicate their fealty with our country or to protect themselves from violence. Fearful and angry Americans beat random Muslims, and accusations flew. Because of the secrecy that permeates that time, we are not sure whether innocent Muslims, accused of terrorism, were deported. We do know that our “intelligence” agencies were granted increased power because of the “war on terrorism.”

All of us should be educated about the dangers that face our country. One of those dangers is intolerance. As the United States becomes increasingly diverse, we need to learn more about all of the cultures that make up this great nation.

We need to learn more languages so we can be more competitive with other countries. And we need to learn about the range of Islamic thinking, in cultural context. Radical Islam has been partly shaped by aggression on the part of the United States.

Timing is everything. These DVDs weren’t given away six weeks before an election except to attempt to influence the election. If you watch “Obsession,” do so with a grain of salt. If you object to the message, reach out to the Clarion Fund and let them know that while they have the right to distribute propaganda, everyone is not swayed by it.

Julianne Malveaux is president of Bennett College for Women. She may be reached at presoffice@bennett.edu.