Air District fines Lennar $515,000 for poisoning the community with its toxic dust from the Hunters Point Naval Shipyard

Environmental justice demands the cessation of the production of all toxins, hazardous wastes, and radioactive materials, and that all past and current producers be held strictly accountable to the people for detoxification of the contaminant at the point of production. – Principles of Environmental Justice

Time flies so quickly! Why, just a year ago the Orlando Sentinel newspaper reported that on Nov. 6, 2007, a 23-pound fragmentation bomb was found under the dirt in the yard of a house under construction in the Warwick Section of Vista Lakes, Florida.

The bomb was found by munitions workers hired by the homebuilder Lennar. Lennar had constructed a new neighborhood on a former military mine field!

On the opposite side of the country, Lennar-BVHP, a limited liability corporation, came under intense scrutiny by state and federal government regulators following the issuance of notices of violation by both the San Francisco Department of Public Health and the Bay Area Air Quality Management District in response to grading and construction activities at a former military base called the Hunters Point Naval Shipyard.

During the spring and summer months of 2006, Lennar contractor CH2M Hill violated conditions set forth by the BAAQMD Asbestos Dust Mitigation Plan for grading, deconstruction and development activities at the shipyard site. In so doing, Lennar exposed the neighboring community, school children and shipyard workers to toxic dust with elevated levels of asbestos, particulates and other inorganic compounds. Soil analyses at the shipyard had historically yielded elevated levels of toxins including lead, manganese, chromium, nickel and arsenic.

On Aug. 7, 2008, the chief executive officer for Lennar in San Francisco, Kofi Bonner, entered into a settlement agreement with BAAQMD executive officer Jack Broadbent to pay $515,000 in civil penalties for violations of California Health and Safety Code Section 42400.

Under terms of the settlement the air district will not seek criminal or civil penalties for violations arising from activities documented in 2006. Clause 8 of the settlement stipulates however that “the district reserves the right to take future enforcement actions arising out of violations not covered by this settlement agreement. In addition, the district reserves the right to demand increased penalties in connection with any future alleged violations.”

By November of 2008, Lennar was facing imminent bankruptcy after spending over $5 million – or $50 per vote – to pass Proposition G, a measure designed to gain support of the San Francisco electorate for the Shipyard-Candlestick Park Conceptual Plan and its transfers of state and federal lands.

In November hearings before the Redevelopment Agency and the San Francisco Board of Supervisors, Lennar sought non-binding approval of a financial plan that changed the original shipyard Disposition and Development Agreement to yield higher profits for the developer.

Missing from the financial plan was itemization of costs for an environmental insurance policy and no mention was made of the costs of the shipyard cleanup Lennar boasted it would conduct throughout the Proposition G campaign.

While the shipyard is federal property, the conceptual plan calls for a “dirty transfer” of the property to the City and County of San Francisco to meet the timeline for construction of a new stadium on radiation-contaminated Parcel D for the San Francisco 49ers.

The football team has demonstrated little to no interest in building a stadium complex within 100 feet of a landfill that generates flammable, explosive quantities of methane gas and toxic volatile organic compounds.

Within one week of the successful passage of Proposition G, Lennar “bailed out” of its 10-year commitment to develop the former military base at Mare Island by filing bankruptcy, leaving the city of Vallejo holding “the bill.”

Lennar’s LEN stocks had sunk to $3.60 per share by mid-November despite restructuring and partnership with the financial firm CB Richard Ellis, headed by Richard Blum, a UC regent and husband of Sen. Dianne Feinstein, a principle sponsor of the Lennar-funded Proposition G. 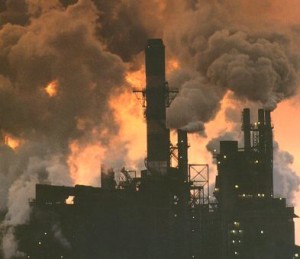 “The environmental conditions that poison our water and contaminate our air are not contained within national boundaries.” – U.S. Surgeon General Richard Carmona, Call to Action on Global Health 2006

On May 21, 2008, the board of directors of the nine-county Bay Area Air Quality Management District approved new regulations to impose fees on businesses that emit carbon dioxide and other heat trapping gases linked to global warming.

The 15 to 1 vote to subject power plants, oil refineries, hospitals, airlines and other polluting factories and industries to an emissions fee is expected to strengthen a national precedent upon implementation in this year. Bay Area power plants and oil refineries bear the greatest brunt of financial responsibility for the Air District’s new “polluter pays” regulations.

Under the BAAQMD’s plan to charge companies 4.4 cents per ton of carbon they emit, Mirant’s power plant in Potrero Hill will pay $11,000 in emissions fees for the 247,000 metric tons per year of greenhouse gases it belches into the sky over southeast San Francisco.

According to data from the Bay Area Air Quality Management District included in the document, “Environmental Impact on the Community: Air Pollution in Bayview Hunters Point,” the 94124 zipcode ranks in the 80th percentile for particulates, carbon monoxide, nitrogen oxides and volatile organic compounds. It ranks in the 90th percentile for sulfur dioxide.

Some experts proposed shutting down these three diesel turbines to reduce air pollution to levels similar to those projected by the proposal to site three combustion turbine (CT) “peaker” plants in southeast San Francisco. San Francisco Mayor Gavin Newsom sponsored alternative legislation calling for the retrofit of the Mirant plant.

District 10 Supervisor Sophie Maxwell and Board President Aaron Peskin continue to push for the siting of the CT peakers under the false assertion that they are less polluting than the Mirant retrofit option. In actuality they seek to increase the real estate value of the land upon which the power plant is sited to appeal to investors interested in redevelopment of the site.

An analysis conducted by College Board trustee and Sierra Club executive member John Rizzo concludes that the CT peakers running at a maximum allowable rate of 11 hours a day, six days a week, will generate more toxic air emissions and greenhouse gases than the Mirant plant presently does.

Supervisor Ross Mirkarimi is advancing Community Choice Aggregation as a step toward city-owned clean energy. Additionally, Mirkarimi proposed a transmission-only alternative to closing the Mirant power plant. Using energy transmitted by the Jefferson Martin and Transbay cables, San Francisco has the potential capacity to close the Mirant plant and meet our energy needs without the construction of new fossil fuel burning power plants.

Biomonitoring: assessing our exposure to pollutants

In 2002 a study called “The Body Burden” found unacceptably high levels of toxic compounds in participants who agreed to be tested. Biomonitoring is research that measures the levels of chemicals in our bodies by analyzing samples of blood, tissue, urine and breast milk.

Ortiz stated, “Biomonitoring is the next logical, critical step for us to take in addressing threats to public health. Our technology and science at this time in history offer us the tools to identify environmental agents so that we can craft the best public health strategy to enable a better quality of life. It is my hope that this research can lead to more deliberate decision making as we tackle chronic diseases and cancers that are pervasively and frighteningly invading our families and personal lives.”

This past summer public hearings on the implementation of the California Biomonitoring Program were held in Oakland.

Nowhere is the need for biomonitoring trials as great as in Bayview Hunters Point where the nine-member Black Caucus of the California Legislature found one of the highest overall death rates and infant mortality rates for Blacks in the state.

UCSF researcher, Dr. Kevin Grumbach stated in a June 9, 1997, Chronicle article, “Bayview Hunters Point residents have reason to be concerned about the effect the environment is having on their health,” noting that of 39 pollutants measured by the Bay Area Air Quality Management District in San Francisco neighborhoods, the highest concentrations – 20 pollutants – were found in Bayview Hunters Point.

In June of 1997, Grumbach and Dr. Tomas Aragon of the Department of Public Health released the findings of an analysis of DPH records which found that hospitalization rates for asthma, emphysema and congestive heart failure in Bayview Hunters Point were 138 per 10,000 compared to a statewide average of 37 per 10,000. Rates for hospitalization and premature death for children were found to be markedly higher in Bayview Hunters Point.

Grumbach noted BVHP contains four times as many toxins as any other city neighborhood, had 700 hazardous waste material facilities, 325 underground petroleum storage tanks and two Superfund sites, including the Hunters Point Naval Shipyard. He called the environment “the smoking gun.”

Health Director Dr. Mitchell Katz testified to the Board of Supervisors in support of citing the CT peaker plants in southeast San Francisco in October of 2007. Additionally, Katz opposed a temporary halt to grading and construction activities at Lennar’s Parcel A construction site, stating in a powerpoint presentation to a July 2007 public hearing of the Board of Supervisors and, again, to an October 2007 hearing of the Board of Education that “dust exposure does not cause asthma.”

Clearly refuting Dr. Katz’s opinion, the California Air Resources Board released a report in March of this year which attributed the excess burden of disease seen in West Oakland residents to “diesel particulates” from vehicles, construction dust and industry at the Port of Oakland. In response, the Alameda County health director asked the Port to assume responsibility for the adverse impact of its activities on over 1 million people living adjacent to it.

In a similar action in Fresno this year, the Air Resources Board approved a plan to clamp down on airborne dust, smoke and soot, which it describes as “microscopic pollution particles linked to thousands of early deaths in the San Joaquin Valley every year.”