The shoe heard ’round the world

Today I received, about 20 times by email, the video of the Iraqi journalist throwing his shoes at George Bush at a press conference in Baghdad. My friends and colleagues were gleeful at the humiliation suffered by our Liar in Chief. 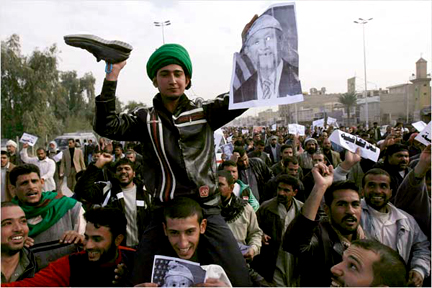 I have to say, the video made me smile, too … but I understand the Iraqi’s anger all too well. I occasionally get a comment from someone that I am too “angry,” and how can I bring peace to the world when I can’t even bring peace to myself?

First of all, I am at total peace with myself. I can look straight at myself in the mirror knowing that I have done everything humanly possible to bring the people to justice who murdered my son and so many others: I have sacrificed relationships, my health, my monetary resources, I’ve camped out in front of his Texas pig farm in very hostile conditions and I even ran for Congress against Nancy Pelosi, who refuses to use her power to hold BushCo accountable. If there is more that one person can do, I sure don’t know what it could be.

I am not only angry that BushCo killed my oldest son, my best friend, my darling Casey, but I am super-pissed that the Bush regime has killed or injured tens of thousands of our troops, millions of Iraqis and Afghans, and destroyed two countries for nothing but greed for money and power. I am angry that our country is teetering perilously on the brink of economic collapse and millions of our brothers and sisters have lost their jobs and homes because of the Robber Class, led and supported by BushCo. I often wonder what it would take to anger my materialistic and easily distracted neighbors and detractors.

I have met with the president and I know how many checkpoints, metal detectors, physical inspections and other extreme security measures one goes through. There is no way any lethal weapons would get through, but throwing shoes is a perfect non-lethal way of showing the “most powerful” man in the world how much contempt one has for him.

Of course, George and his entourage would have to pay “surprise” visits to the countries he has devastated. If his visits were announced, some advance planning could be done and he may have to face more than shoes. I was in Cuba last week and I have traveled the world and if George Bush isn’t the most hated man in the world, I can’t imagine who it would be. If he does not have to go to a prison with bars, barbed wired and impenetrable brick walls, at least he will be confined to a prison of his own construct, not being able to travel freely as the World’s Enemy No. 1.

The shoe incident is not so funny though when you know the frustration and sorrow that prompted it. I don’t know anything about the journalist who did it, but I suspect he has had family members killed and sees his country in ruins for the likes of the man who to him is the face of U.S. imperial violence. Standing next to his puppet, Maliki, George actually had the gall to say that the invasion and occupation of Iraq were “hard, but necessary.”

I am surprised he wasn’t deluged with shoes.

Cindy Sheehan can be reached at Cindy@CindyforCongress.org.

“This is a gift from the Iraqis. This is the farewell kiss, you dog,” shouted Muntather al-Zaidi in Arabic as he threw his shoes at Bush during a news conference with Iraqi Prime Minister Nouri al-Maliki on Dec. 14.

Multiple sources in Baghdad confirmed that Al-Zaidi was badly beaten right after the incident. He can be heard shouting in pain in this video. And after beating him, the Iraqi authorities arrested Al-Zaidi.

Here is a rough translation of the statement issued by Al-Baghdadia, the TV channel he works with:

“Al Baghdadia asks the Iraqi authorities to immediately release our employee, Montather Al-Zaidi, in line with the Iraqi and U.S. promises of democracy and freedom of expression. Any action taken against Montather Al-Zaidi will remind us of the behavior we experienced during the time of the dictatorship era when we witnessed violence, arbitrary arrests, mass graves and the confiscation of public freedoms and private.

“We also call for press and media institutions and the Arab world to stand in solidarity with Montather Al-Zaidi and call for his release.”

A petition demanding the immediate release of Al-Zaidi is available at http://www.ipetitions.com/petition/montather/index.html.

In solidarity with and in support of the brave Iraqi journalist Muntather al-Zaidi, a Facebook protest calls on Americans to flood the White House with smelly old shoes. “From today until his last day in office, we should send Mr. Bush every smelly old shoe that we can find at home or in the street to express our true feelings about a ‘job well done,'” say the organizers. “With his shoes, Muntather al-Zaidi spoke for millions of people and he stands as a hero for speaking shoes to power.” Mail your old shoes to: 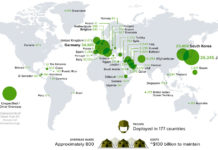 More choices than Democrats and Republicans