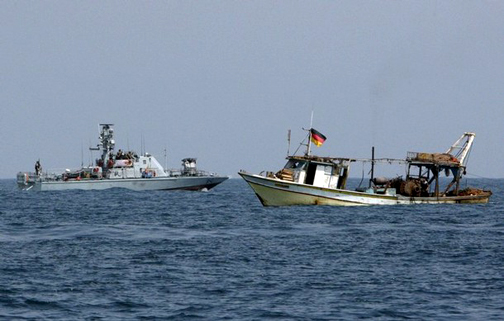 Gaza Strip, Palestine, has been brutally occupied by Apartheid Israel since 1967 and has been under a genocidal siege since mid-2007. Israel controls all the borders, and the southern border is additionally controlled by Egypt.

The sea and the air space are as if behind bars too. One and a half million Palestinians collectively punished – prisoner-like – in the largest open-air prison in the world. Babies in incubators, children, teenagers, adults, senior citizens – all are totally encaged. Israel has deemed them to be terrorists, threats to the security and peace of every Israeli citizen, and all the governments of the world, and many international organizations are complicit in this illegal action by their do-nothing, say-nothing policies.

This hermetic closure on Gaza Strip is preventing fuel, medicine, food, wheat for milling, spare parts, all various and sundry supplies through the border crossings. The fuel that powers the sewage treatment plants and that supplies the power plant that provides electricity and running water to the people in their homes and businesses, i.e. the businesses that are still open among the hundreds of thousands that have closed as a direct result of the siege and occupation, is in short supply.

Some areas have electricity and running water only 12 hours a day and some people living in the many refugee camps or in high multi-storied buildings are without running water and electricity for days at a time. All the hospitals use generators for power every day when the electricity goes out. The generators are breaking down and there are no spare parts available to fix them; they are at the border crossing waiting to enter.

In addition, hundreds if not thousands of medicines are lacking. There have been various attempts to bring medicines in, but they have all been thwarted by the refusal of Israel and Egypt to allow the medicines in. Sick people have no right to life by Zionist standards.

Nobody comes in or out of Gaza Strip unless Israel approves: Business people, foreign travelers, non-violent direct action volunteers, journalists and, of course, Palestinians cannot enter or leave. Sick people, with urgent medical conditions who need treatment in hospitals outside of Gaza Strip can’t get out. As a result at least 258 Palestinians have died, needlessly.

Sick people have no right to life by Zionist standards.

Exports of strawberries, flowers, fish and other Gazan produced products can’t get out to be sold abroad or even in Israel and so hundreds of thousands of Palestinians living in Gaza Strip are denied a livelihood. Why?

Since the genocidal siege was implemented, the Israeli occupation force navy has enforced an arbitrary 4- to 6-mile fishing limit on all the fishermen of Gaza Strip. Israeli gunboats enforce this arbitrary limit by patrolling the internationally recognized Gazan waters.

You have to understand, warships are invading the Gazan fishing waters on a daily basis – breaking the ceasefire. The navy soldiers often shoot, wound and kill unarmed Palestinian fishermen while they are trawling and fishing, trying to earn a livelihood for their families. These are acts of war, yet you never hear about it or see it on the news.

On Aug. 23, 2008, the first two Free Gaza Movement boats entered the waters of Gaza Strip and landed at Gaza City port in Palestine, the first time in 41 years that an international boat has landed in this once thriving port city. Since then, members of International Solidarity Movement (ISM) Gaza Strip, who arrived on the boats, have been accompanying some of the Palestinian fishermen from Gaza City when they trawl for fish in their internationally recognized Gazan waters.

The volunteers have witnessed the Israeli occupation force navy shooting machine guns, grenades and other weapons towards the Palestinian trawling vessels and also using a high-powered water cannon against them while they are trawling for fish, often as they are bringing in their nets. The water cannon shoots high-powered blasts of water onto the boats, damaging the boats and injuring people.

A new weapon used by one gunboat is blasting high-powered dirty water, with a very bad smell, onto the boats and onto the fishermen and volunteers. Sometimes the gunboat waits to blast this bad smelling water until the trawlers have pulled in a netful of fish, the fish and decks of the boat are then covered with this horrendous smelly water. It is unknown what is in the water, but it is feared that it is highly toxic and could present a health threat to anybody who has come into contact with the water and anyone who eats the fish sprayed by the dirty water.

The three Palestinian trawling vessels were illegally confiscated. The 16 fishermen were released at midnight that night, but the international volunteers were kidnapped into Israel against their will and later deported to Europe and to USA, although each of them wanted to return to Gaza Strip. Ten days later the trawling vessels were returned to the Gazan fishing waters, the day after legal briefs were filed in Israel’s Supreme Court against the Israeli occupation force navy.

The farming communities living along the border with Israel also face a difficult situation. The Israeli occupation force army declared an arbitrary Buffer Zone along the entire eastern border of Gaza Strip with Israel. Palestinian farmers who live in the area can’t farm their lands, some for five to 15 years. This zone is 100-500 meters deep inside Palestine.

This Buffer Zone is on agriculturally rich soil, but soldiers driving the D9 bulldozers have created a desert by destroying all the olive, fruit and nut trees, the vegetable crops and the hot houses and killing all the sheep and chickens – destroying the livelihood of the farmers and their families. Directly on the other side are Israeli farms (kibbutzes) and those farmers farm right up against the fence. Even today when farmers go to their land they are shot at – they are forbidden to work their own land.

On Nov. 29, 2008, the Boycott, Divestment and Sanctions Campaign National Committee (BNC) presented its strategic position paper, “United Against Apartheid, Colonialism and Occupation: Dignity and Justice for the Palestinian People, Palestinian Civil Society’s Strategic Position Paper for the Durban Review Conference, Geneva, 20-24 April 2009” in its final draft. Here is an excerpt from only one of its findings:

“The State of Israel must be held accountable to its legal obligations. Impunity for its massive and systematic violations of international law and treating it as an exception above the law of nations must be ended. Only thus can justice and dignity be restored to the Palestinian people, and lasting, comprehensive peace be established in the Middle East. As states and the United Nations have lacked political will for effective action, the wider international community, in particular churches, unions, NGOs, cultural and academic figures, and independent experts are called upon to develop and strengthen effective measures, such as the civil society Campaign for Boycott, Divestment and Sanctions against Israel (BDS) and legal action, that can create political will among states and the United Nations to respect their legal obligations to the Palestinian people and halt and reverse Israel’s regime of apartheid, settler-colonialism and belligerent occupation.”

Donna Wallach and her twin sister Darlene Wallach were on the first Free Gaza boats to break the Israeli blockade in August and stayed in Gaza with the International Solidarity Movement. Donna can be reached on her cell phone at +972-59-8836420 or by email at cats4jazz@gmail.com.

Notes from Donna and Darlene Wallach

In a note transmitting this story, Donna remarks: “The Palestinian people always have a ready smile and a joke to tell and of course a laugh and very kind words. They are so steadfast and very proud and resilient. Sixty years of occupation and almost two years of a horrendous siege, yet they complain very little and open up their hearts and homes to perfect strangers who don’t speak their language and come from a very different culture. I would wish that hundreds of thousands of people would come to Palestine, West Bank and the Gaza Strip and for them to witness with their own eyes and with their own experience the brutal and genocidal Israeli occupation and siege.”

Darlene, one of the three International Solidarity Movement volunteers who were recently kidnapped from a fishing boat, jailed and deported – she immediately headed back to Gaza – wrote an op-ed published Dec. 12 in the San Jose Mercury News that concluded with this recommendation: “The incoming Obama administration should withhold financial and military aid to Israel until it ends the blockade and should demand the free flow of people, goods, and services in and out of Gaza. Then I would feel my ordeal had been well worthwhile.”

Break the siege on Gaza NOW!

Awakening the power of the human dream of freedom

Cynthia McKinney is in Gaza and the medicine got through!