Editor’s note: This story, originally published Dec. 14, 2005, is being republished today to mark the third anniversary of the state murder of Stanley Tookie Williams. 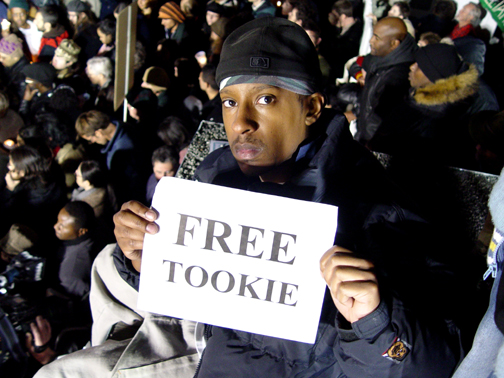 “The dedication of Williams’ book ‘Life in Prison’ casts significant doubt on his personal redemption. This book was published in 1998, several years after Williams’ claimed redemptive experience. Specifically, the book is dedicated to ‘Nelson Mandela, Angela Davis, Malcolm X, Assata Shakur, Geronimo Ji Jaga Pratt, Ramona Africa, John Africa, Leonard Peltier, Dhoruba Al-Mujahid, George Jackson, Mumia Abu-Jamal, and the countless other men, women, and youths who have to endure the hellish oppression of living behind bars.’ The mix of individuals on this list is curious. Most have violent pasts and some have been convicted of committing heinous murders, including the killing of law enforcement.

“But the inclusion of George Jackson on this list defies reason and is a significant indicator that Williams is not reformed and that he still sees violence and lawlessness as a legitimate means to address societal problems.” 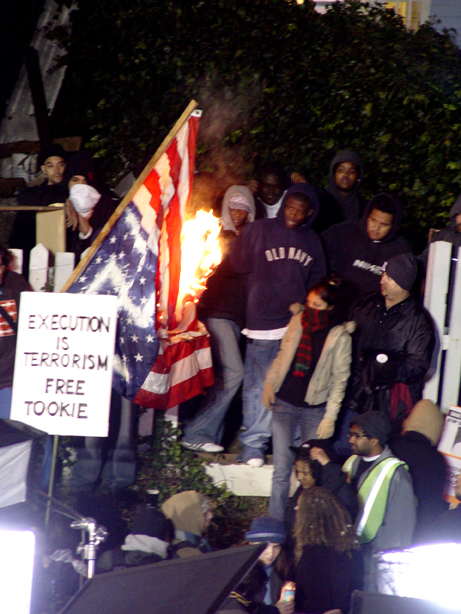 Tookie Williams was murdered by the state of California on Tuesday, Dec. 13, at 12:35 a.m., on the grounds of San Quentin Concentration Camp. Members of the Bay Area chapter of the Prisoners of Conscience Committee were on the scene protesting, organizing and interviewing people about what they felt about the situation that we were facing in regards to the Terminator not granting clemency to an innocent man.

“I think that it is murder … the same way that they killed George (Jackson), though different. I think that it is clear that there is no justice in the criminal justice system for anyone that is opposed to the established order of things. I think Tookie Williams didn’t receive justice, and that he deserved to have a trial,” said former political prisoner Sundiata Tate, who was at San Quentin protesting Tookie’s assassination to the last second. Sundiata also witnessed the assassination of Field Marshall George Jackson of the Black Panther Party at San Quentin three decades ago.

“I think that the fact that the governor mentioned George Jackson, mentioned Nelson Mandela, Angela Davis, Assata Shakur and Mumia Abu Jamal, in reference to Tookie dedicating his book to these souljahs, people who have fought on behalf of our people – the fact that he mentioned that with a particular emphasis on George Jackson, I think that it shows that he has no respect for Black people. He has no respect for the people, and for that, we need to boot his ass out of office. We can’t forget and we can’t forgive,” Sundiata declared.

“Well, he obviously only read that excerpt where the book was dedicated and didn’t read his book, because if he did, he would understand the fact that Tookie breaks down why Black folks kill each other, which has to do with them buying into the stereotypes, buying into the idea that each other is the enemy. And the people that he dedicated the book to realized that each other were not the enemy and that this system had to be taken down,” said Boots from the revolutionary rap group the Coup, who was interviewed less than an hour before the assassin’s needle was to be put in Tookie’s arm.

‘It is murder … the same way that they killed George … We can’t forget and we can’t forgive,’ declared Sundiata Tate, who had witnessed the assassination of Black Panther Field Marshall George Jackson at San Quentin three decades ago.

“And so that is part of his redemption in the sense that he has a program to resolve conflicts in the hood. Part of that program, besides a block by block carefully outlined guide for a truce in a conflict, is that people have to learn their history and they have to learn where they stand in the struggle to make a better life for each other.

“So a lot of the people that he talked about were people that have been through the prison system, have been through what is the so-called justice system, and had at some point before or after figured out that the key to people surviving is not just surviving but moving forward together as a people, moving forward together in struggle against the system, against the ruling class. So I just think that it went over Schwarzenegger’s head, either that or he was looking for a good excuse to not grant him a stay of execution.

“But definitely George Jackson was someone that went into prison at an early age and through that educated himself on the way that the system works and has inspired millions of people to change some of the self-destructive tendencies that they had, that were taught to them by this system in much the same way Tookie Williams has. So for Arnold Schwarzenneger to not realize that means that he is disconnected from reality and stuck in his tower of ruling over people and stepping on everyone,” Boots concluded. 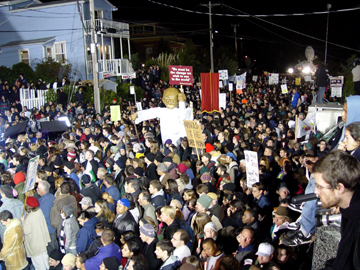 Over 5,000 people attended this protest and vigil outside the gates of San Quentin. The crowd contained a weird mix of people from all nationalities and all walks of life. Some people were praying in the back of the crowd, others were actively protesting on hillsides and roofs, while others were singing from the stage.

“What has really been in my mind all day long, outside of shock and despair, is anger, just to be honest. I’ve been getting peace by thinking about James Baldwin’s ‘Going to Meet the Man.’ I’m just trying to make sense of it all, the ritual of lynching our people by the powers that be. And as you can see down the way that way, people are saying really ridiculous things using Christianity as a guise for justifying racism – saying it is not racism, it’s justice and so forth,” said Donnalissa Fisher, a professor at Laney College.

“It really reminds me of what we’ve been witnessing for hundreds and hundreds of years in the United States, so I’m pretty disgusted. I’m not hopeless like a lot of my colleagues in the struggle who have been feeling a little bit hopeless at this moment. I’m not hopeless; I’m saying it’s time for us to train harder. We have to keep the fight going and have to sharpen our tools and make sure that justice sustains,” Donnalissa added.

I think that at the end of the night, everybody was convinced that the state kills who it wants for political gain, and until we organize and do something about it, they will continue …