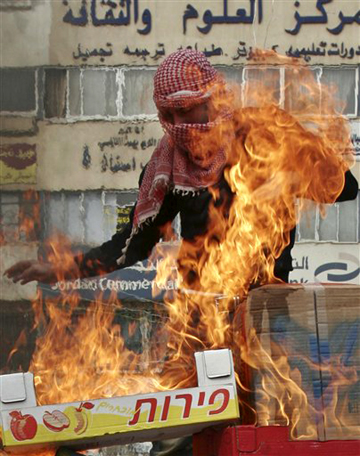 Jerusalem (IPS) – The Israeli government is stepping up efforts to suppress dissent and crush resistance in the streets. Police have been videotaping the demonstrations and subsequently arresting protesters in large numbers.

According to Israeli police reports, at least 763 Israeli citizens, the majority of them Palestinian and 244 under 18 years old, have been arrested, imprisoned or detained for participating in such demonstrations. Most have been held and then released, but at least 30 of those arrested over the past three weeks are still being held in prison.

Ameer Makhoul, director of Ittijah, the Union of Arab Community-Based Associations in Haifa, tells IPS that these demonstrations “are part of the uprising here inside the Green Line, to share responsibility and to share the challenge with the people in the Gaza strip.”

As an organizer of many of these solidarity demonstrations inside Israel, Makhoul himself was arrested by the Shin Bet (the Israeli secret service). “They called me, came to my home and held me for four hours,” he tells IPS. “They accused me of being a terrorist and supporting terror. They said that they are watching me and monitoring me.” Israel, he said, “has become a terror state.”

The Shin Bet has accused Makhoul and the hundreds of others arrested of “being a rebel, threatening the security of the state of Israel during war time.”

Makhoul believes that such threats are being implemented by Israel’s security forces “(in order to) break our will and the spirit of our people. But I think our spirit is much, much stronger here in Haifa and in Gaza than the Israeli oppression.”

On Jan. 15, a Haaretz-Dialog public opinion poll taken in Israel found that 82 percent of the Israeli population believes that Israel did not go too far in its three-week operation in Gaza, “despite pictures from Gaza depicting massive destruction and a large number of wounded and killed, including women and children,” reports Haaretz.

At a demonstration last week in front of Kishon prison northeast of Haifa, where some of the Palestinian demonstrators are being held, Israeli anarchist and professor of mathematics Kobi Snitz tells IPS that this figure is indicative of the current social climate inside the state.

“People are made to be afraid. Virtually all Israelis, particularly Israeli Jews, are convinced that Hamas was the one that violated the ceasefire. This just isn’t true … (but) you won’t find this in the Israeli media. There is no understanding of the level of violence used on Gaza by the Israeli military. And the police operate under the assumption and guidelines that every political expression now is to be repressed and prevented.”

IPS asked Snitz to describe the momentum of these daily protests across the country. “These demonstrations happened virtually by themselves,” he says. “At this point, anybody who is not severely indoctrinated or ignorant just feels compelled to do something every day. It’s unbearable to sit at home and not do anything.” 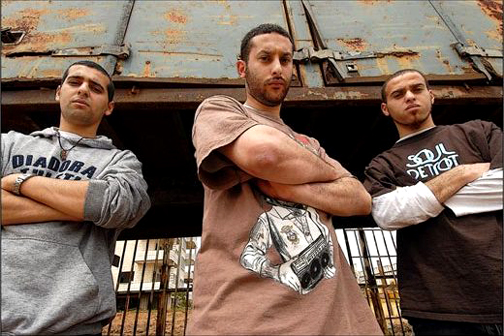 Last Saturday night in the coastal town of Jaffa, south of Tel Aviv, several thousand demonstrators – including Palestinians, various peace groups, Israeli anarchists and teenaged Israeli refusniks fresh from jail for refusing to serve in the mandatory military – marched through the main street in the old city with flags, banners and vociferous determination to keep up the fight inside Israeli society against their government’s lethal operations in Gaza. Israeli security forces, carrying weapons and video cameras, heavily flanked the protesters.

But activists say it is crucial to expand the discussion from this current struggle for Palestinians inside the Gaza strip outward into the larger context. “I’m here to take a stand for Gaza,” Mahmood Jreri of the acclaimed Palestinian hip-hop group DAM, based in Lydd (east of Tel Aviv), tells IPS during the march.

“The main reason (I’m here) is to say that we are not part of what the Israeli government is doing. The Palestinian people are fighting for their freedom and fighting against the occupation. When Palestinians have their freedom, then there will be peace here.”

Nora Barrows-Friedman is the senior producer and co-host of Flashpoints, the investigative newsmagazine broadcast on KPFA 94.1 FM weekdays at 5 p.m. She has been reporting regularly from and about Palestine since 2004. She can be reached at nora@riseup.net.

How you can help: Boycott, divest, sanction Israel

A fast growing worldwide movement calls for a boycott on goods made in Israel and companies with investments in Israel. For the latest news on the Global BDS (Boycott, Divest, Sanction) Movement and to endorse the Palestinian Unified Call, go to BDSMovement.net. These websites have additional information: Boycott Israel Now,  Boycott Israeli Goods,  Boycott Israeli Products Campaign,  and Global Exchange. 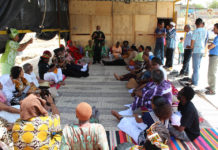