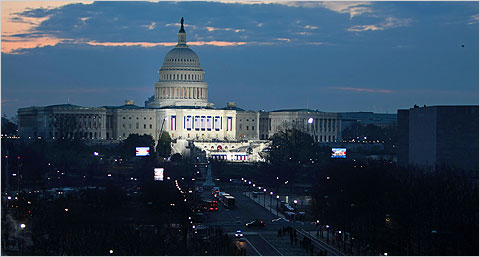 The first train to the inauguration was to leave at 4:03 a.m. Jan. 20 and Dion Roberts of San Francisco, a social worker who helps the homeless, was on the platform in Alexandria, Virginia, when it rolled in. “I had come too far not to go all the way,” said Roberts. Her focused approach paid off. She stood within half an hour of taking the train, right behind the ticketed individuals gathered to see the inauguration of President Barack Obama. “There I was on the mall able to witness this great moment in history.”

“He opened the door wide for everyone,” said Solomon Ghile of Eritrea. “For 30 years my country has been seeking its independence,” said Ghile, a resident of the United States for 24 years. “Obama is an inspiration for everyone. He represents opportunity for Indians, Blacks, Whites, Latinos, everyone.”

Ghile’s words, spoken a few hours before the inauguration, were congruous with President Obama’s own words: “We remain a young nation, but in the words of Scripture, the time has come to set aside childish things. The time has come to reaffirm our enduring spirit; to choose our better history; to carry forward that precious gift, that noble idea, passed on from generation to generation: the God-given promise that all are equal, all are free and all deserve a chance to pursue their full measure of happiness.” 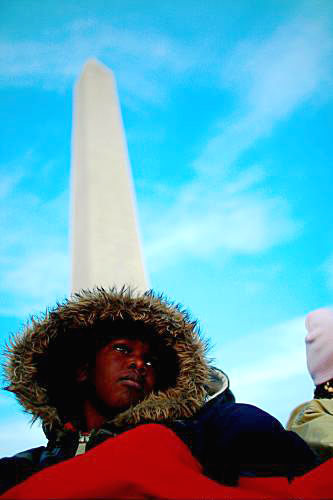 The president’s speech was heard from different vantage points by many who traveled from the Bay Area.

Mel Washington, owner of Bay Copy, a small business in the Bayview area of San Francisco, traveled the nation campaigning for presidential candidate Obama and felt the pinnacle of his experience was to come to Washington and participate in the aura of the inauguration. Washington, who listened with teary eyes like Jesse Jackson, Andrew Young and others, said: “It was a proud moment to hear what he had to say and that he is determined to make this country better. President Obama definitely is looking out for the people.”

Rev. Greggory Brown, pastor of Miracle of Faith Community Church (Evangelical Lutheran Church in America), said: “One of the greatest things President Obama and his beautiful wife bring to the nation and the world is a great picture of the African American family. There is a family in the White House with young children that represent the future of this nation.

“The world will see an aspect of the Black family that is very alive and well that is never or rarely reported on by the media. The Obama family will be a reminder to Black people as well. We are people who have looked in the mirror and forgotten what we look like. President and Mrs. Obama inspire people of color and the world.” 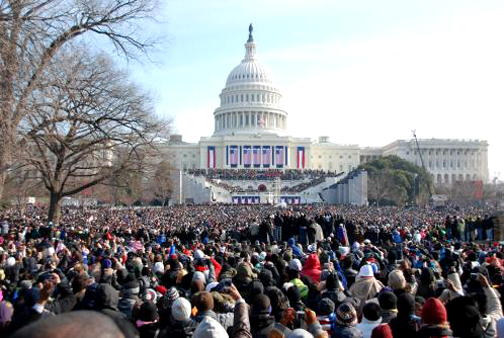 There is a man of African descent in the White House but what does that mean on the front lines of life? Brown and his wife Mary talked about the ingrained racism that even people of good intention exude.

Having changed planes in Detroit, Brown’s wife, who is White and works for a non-profit that builds senior housing, was sitting between Brown and another passenger Brown described as “another big Black man.” The flight attendant came by and in a very compassionate tone stated, “You know, I can move you to a seat closer to the front if you’d like to be more comfortable?” Mrs. Brown replied, “No thank you, I’m very comfortable being right next to my husband.”

“The attendant dropped her jaw and was speechless and embarrassed as I cuddled closer to Gregg. I believe President and Mrs. Obama inspire people to be better people. It’s time we live out the nation’s founding philosophy that ‘all men are created equal with the right to life, liberty and the pursuit of happiness.'”

Dr. Ramona Tascoe, last in the news when she was among the organizers of the commemoration of the 40th anniversary of the San Francisco State University student strike to create the first Black studies program, feels the work of the students led the way for the advancement of people of color across the nation and President Obama.

“I didn’t leave for the inauguration expecting to be on duty, but three people collapsed around me and on duty I was,” she explained. “One of the people who collapsed was a woman from President Obama’s home state of Hawaii who had previously had a heart attack. There I was in the room – with the Secret Service assisting me.” So Dr. Tascoe extended the Dr. Martin Luther King Jr. Day of Service that Barack and Michelle Obama supported to Inauguration Day.

In response to the inauguration and its signification, Tascoe said, “This historic occasion is merely the tip of the iceberg. Yet unseen but soon to surface is the debunking of a global culture of supremacy that assumes or guarantees the authority of European principles, practices, preferences and privilege.” 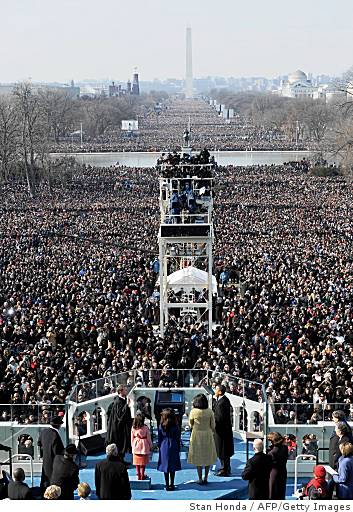 As an added note on race relations at the grassroots level, Rev. Brown and Dr. Tascoe were at the forefront of community leaders calling on the Bay Area Rapid Transit (BART) board of directors to take action in the case of the New Year’s Day shooting death of Oscar Grant by BART police officer Johannes Mehserle.

Brown sent out a call to action to the Black professional community, “Black men stand for Black boys,” to attend the BART meetings and the marches. There was media coverage of Brown and Tascoe’s strong call for justice at the BART meeting, including an interview with Brown in the New York Times.

Rev. Brown, Mrs. Brown, Dr. Tascoe, Ms. Roberts, Mr. Washington and Mr. Ghile were like so many others who put aside their day-to-day joys and battles to focus on the change that has come to the U.S. and the world.

An estimated 1.8 million people graced the Washington Mall with tears of joy and an energy and spirit that galvanized people to brave the very cold January weather for hours to be witnesses to history. For many, Barack Obama, the 44th president of the United States represents “Yes, we can,” “Yes, I can,” “Yes, I have” and “Yes, I will.”

Jackie Wright is a Bay Area writer and public relations consultant. She can be reached at wrightenterprises@sbcglobal.net.

‘To My Unborn Sons and Daughters, I’ll Make You Proud’ author Yakub Bey talks about writing and life 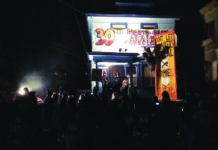