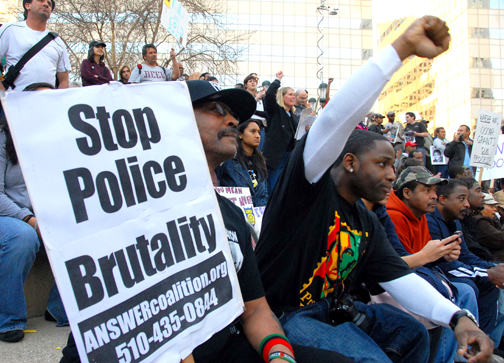 The Jan. 1 killing of Oscar Grant ignited protests last week that were an obvious product of the community’s legitimate outrage and anger at the apparently cold-blooded murder and BART Police Internal Affairs’ failure to demand an immediate interview with Johannes Mehersle, the officer seen by millions killing the young, unarmed father on videos shot by witnesses’ cell phones.

BART officials mishandled the immediate response to the killing and thwarted legitimate protests by closing the Fruitvale Station on Jan. 7, the date of a scheduled protest and vigil. Although Mehserle remained free at the time, police had no hesitation in arresting scores of protesters, some of them violently.

The Bay Area Chapter of the National Lawyers Guild (NLGSF) is pleased that the former BART police officer has finally been arrested for the murder and calls upon Alameda County District Attorney Tom Orloff to prosecute this killing as it would any other homicide, despite Mehserle’s law enforcement status.

The National Lawyers Guild further calls upon BART, Oakland and Alameda County officials to recognize that their shameful response to Oscar Grant’s murder fueled the street protests. Therefore, NLGSF calls upon the Alameda District Attorney’s office to drop all protest related charges and calls on the Oakland police to respect the First Amendment rights of demonstrators at today’s 4 p.m. rally at Frank Ogawa Plaza.

“It is a poor reflection on the Alameda County District Attorney that activists in the streets, many of whom were brutalized by law enforcement, were held and immediately charged with crimes while Mehserle remained free,” said Carlos Villarreal, executive director of the National Lawyers Guild, Bay Area Chapter.

The National Lawyers Guild calls upon BART, Oakland and Alameda County officials to recognize that their shameful response to Oscar Grant’s murder fueled the street protests.

The NLGSF supports efforts by Assemblymember Tom Ammiano and state Sen. Leland Yee to require civilian oversight of the BART police. New oversight should include drafting up-to-date rules, not only to prevent another unjustified shooting but to ensure that all riders’ constitutional rights are protected.

In October, BART closed both the Fruitvale and Coliseum stations during an immigrants’ rights protest in San Francisco that was led by youth of color. “Since the preemptive closure of the East Oakland stations last year that prevented hundreds of young people from joining a lawful demonstration in San Francisco, we have been very concerned with BART’s police practices and believe civilian oversight is long overdue,” said Villarreal.

The Guild maintains a legal hotline, (415) 285-1011, for anyone arrested or who witnessed police brutality in connection with the protests.