Tell Mayor Dellums, DA Orloff and Congresswoman Lee to drop charges against all the protesters 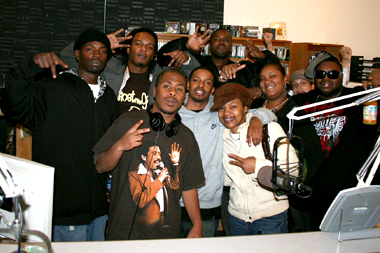 Of the dozens of professional journalists covering the rebellion Wednesday protesting the police who executed young Oscar Grant and the authorities who condone it with their silence, it’s probably safe to assume that only one was fully at home on the streets of East Oakland. And he was the only journalist arrested and jailed and one of only three protesters charged with a felony.

JR Valrey, minister of information for the Prisoners of Conscience Committee headed by Fred Hampton Jr., producer of Block Report Radio heard on KPFA and KPOO locally and other stations across the country, and associate editor of the San Francisco Bay View – raised in East Oakland, where dozens call him cousin – was brutally tackled and arrested by Oakland police for doing his job: interviewing protesters and photographing the demonstration. He was groundlessly charged with felony arson. 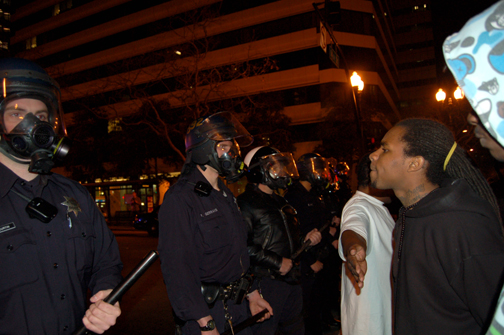 “The police went after him,” said prominent Oakland attorney Walter Riley, describing JR’s arrest on KPFA News on Friday after he was arraigned. “They went after him and tackled him and took him down. I think that JR looks too much like the average young Black man.”

“JR was out there as a reporter,” Riley said, explaining that he “had his camera with him. His camera was confiscated.”

Readers are urged to call for the trumped up charges against JR Valrey and all the arrested protesters to be dropped immediately. Call, mail, fax or email:

Remind them that it is Johannes Mehserle who, though sworn to protect and serve, used his service pistol to execute young Oscar Grant as he lay face down on the BART platform, restrained by two other police officers, by shooting Oscar point blank in the back. He’s the one who needs to be charged. The charges against JR and the other protesters need to be dropped. 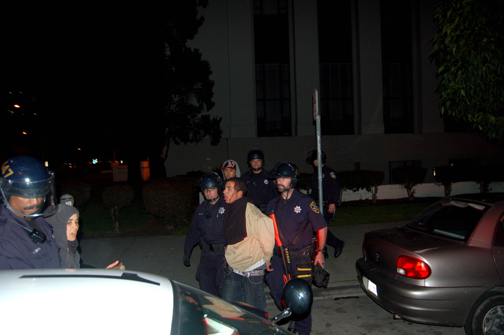 Like Mumia Abu-Jamal, who, before he was framed for killing a cop, was beloved on the streets of Philly as the “voice of the voiceless,” Minister of Information JR is the best known journalist in the Bay Area for his frontline coverage of the police war against the Black community. Bay View readers will remember countless stories he has written about young Black men brutalized, terrorized and murdered by police – stories ignored by other media.

Wednesday, just hours before JR was arrested, his Block Report interview with Donald Wiggins, a cousin of Oscar Grant, was broadcast on KPFA’s Hard Knock Radio. Listen on KPFA.org, beginning 19 minutes into the show. As always, the interview reveals facts and perspectives never voiced to mainstream journalists, who are not trusted by the Black community because, unlike JR, they don’t come from the Black community.

“He lay there for about 30 to 45 minutes,” said Oscar’s cousin, describing the immediate aftermath of the shooting. “So it was really inevitable for him not to be revived at the hospital.” “They let him stay on the platform of the BART for 30 to 45 minutes,” said JR. “Yes,” responded Oscar’s cousin, “while they tried to confiscate phones and video and every other thing to cover it up.”

“If we can reform the White House,” Donald Wiggins asked, “why can’t we reform the police force?” Listen to more of Minister of Information JR’s gripping interviews on his website, www.BlockReportRadio.com.

No reform was evident Wednesday when police in riot gear repeatedly blocked the progress of protesters marching from a 3 p.m. rally at the Fruitvale BART station, where Oscar Grant had been executed, to downtown Oakland. The thousand or more marchers were, JR reported, an almost equal number of Blacks, Latinos, Asians and whites. In a phone call that evening, he said he’d never seen such solidarity. “Everybody’s got everybody’s back,” he said.

As usual, the police set themselves up as the enemy. Many if not all of the 105 arrests they made were brutal. Their arrest of JR was no exception. They tackled him and threw him to the pavement, injuring his leg. He’d probably have been more badly hurt if two attorneys from the National Lawyers Guild hadn’t happened to be right there witnessing his arrest.

Speaking from the courthouse following the protesters’ arraignments, Rose Braz of Critical Resistance told KPFA News: “We’re seeing people who were beat up by the police, have black eyes and bruises and swollen limbs. We’re also hearing from folks who are not getting their cell phones back, who say the police have all the images downloaded from their cell phones.”

“I spoke with Mayor Dellums personally. He said it would be treated like any other homicide,” said George Ciccariello-Maher, a Berkeley Ph.D. candidate in political theory who attended the demonstration Wednesday, in a KPFA News interview with reporter Josh Wolfe. “But now we know that those were just words because as he was saying that, the officer was still sitting at home free, whereas with any other homicide, he would have been taken into custody until his trial date was set. So we already know that the mayor is still not responding in a way that’s commensurate with what’s going on. And that lack of response is what created this situation in the first place, … is what created this rage.”

JR adds that it’s the consensus on the streets that all the police on the Fruitvale BART platform at 2 a.m. New Year’s are responsible, at least as accomplices, in taking the life of Oscar Grant. All of them should be charged and tried. He also urges readers to hold the BART board and Mayor Dellums to their promises to compensate businesses for damage inflicted on their property Wednesday.

What you can do:

• Show your support for Minister of Information JR at his next court date Friday, Jan. 16, 9 a.m., in Department 112 of the Wiley M. Manuel Courthouse, 661 Washington St. in downtown Oakland.

• Come and bring your friends to the “Town Bizness” Townhall Meeting Against Police Terrorism, where the streets and the community will come together to discuss Oscar Grant’s execution and make plans to win justice. Hosted by POCC Minister of Information JR and Marcel Diallo, it will be held at the legendary Black Black Dot Cafe, 1195 Pine St. in West Oakland, on Friday, Jan. 23, at 6 p.m.

• Offer your financial support to Minister of Information JR for his legal defense and to replace his camera by donating online at www.SFBayView.com. You can also donate by credit card by calling the Bay View at (415) 671-0789 or you can mail your donation to SF Bay View, 4917 Third St., San Francisco CA 94124.

• Watch for new developments at www.BlockReportRadio.com and www.SFBayView.com and listen to Hard Knock Radio at 4 p.m. weekdays and to Flashpoints at 5 p.m. weekdays, both on KPFA 94.1FM.