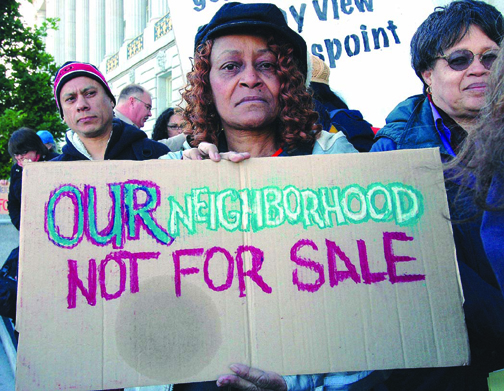 In 2006, the Defend Bayview Hunters Point Committee was formed and collected over 33,000 signatures from San Franciscans all over the city to stop what may be the biggest land grab in any city in the country – nearly 1,400 acres, almost all of Bayview Hunters Point, San Francisco’s last Black homeland. The San Francisco Redevelopment Agency, notorious for bulldozing the Fillmore district, world renowned as Harlem of the West, driving tens of thousands of Black people from their homes and destroying hundreds of Black businesses, proposed to redevelop the Bayview, the neighborhood with the best views and climate in the city. Redevelopment is largely responsible for the fact that San Francisco’s Black population has declined faster and further than that of any other large U.S. city since it destroyed the Fillmore.

The Board of Supervisors had approved the Redevelopment Plan, afraid to buck the big developers panting for a chance to grab our land. So to overturn their vote, we had to submit our referendum to the clerk of the board, who approved it after consulting with the city attorney. We hired an attorney, too, an expert on ballot measures, who approved our petition as well. After we had collected over 33,000 signatures, far more than the 21,000 required – people all over the city were eager to sign – the San Francisco Elections Department certified our petitions and gave the green light to put our referendum on the ballot so the people could decide.

Then the green light turned red when San Francisco City Attorney Dennis Herrera nullified all those signatures – the will of 33,000 intelligent people – on the flimsy excuse that the sheaf of maps and other documents describing the plan, a pile of paper as thick as a phone book, had not been attached to each petition. Despite the issue being front page and prime time news, Herrera said those 33,000 people didn’t know what they were signing.

On Wednesday, Jan. 28, the California Supreme Court rejected our appeal, ruling against the 33,000 San Franciscans who signed our referendum and against the right of the 33,000 residents of Bayview Hunters Point – 91 percent of us people of color – to determine our own destiny. They denied that right not only to Blacks but to all our neighbors, who are Samoan, Asian, Latino, Native American and European. 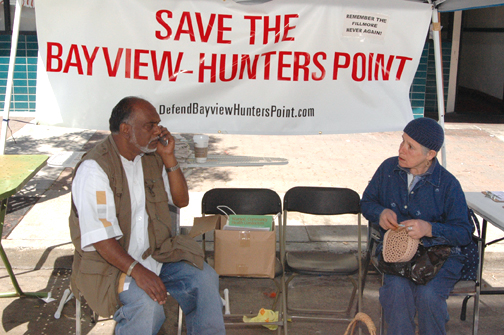 Working with the committee, I collected thousands of those signatures myself, taking our table, our banner, eye-catching posters, maps and other documents, along with the petitions, to neighborhood festivals, block parties and events of all kinds all over the city. Most people who signed asked a number of questions. Oftentimes I asked them to take some reading material with them.

Most already understood the issue: They knew what had happened in the Fillmore and they knew that Redevelopment, with its power of eminent domain, could seize our property and give it to their friends, the big developers. Thursday’s Chronicle put it in a nutshell: The Defend Bayview Hunters Point Committee “said property seizure and gentrification would displace residents and businesses.” Those 33,000 San Franciscans also understood that the referendum they were signing was merely to put the issue to a vote. They’d be able to study it even more thoroughly before they voted.

Imagine, when we had collected over 33,000 signatures, how overwhelmed we were with joy. People all over San Francisco had gone out of their way to help the poorest neighborhood in the city. Unemployment in Bayview Hunters Point is over 40 percent.

After City Attorney Herrera issued his opinion to invalidate our referendum, we took the matter to the trial court, where the judge, who had a conflict of interest with Herrera, ruled in his favor. The conflict of interest was brought up but no one paid attention. Dennis Herrera had contributed to the campaign of the judge and the judge had received his contribution, knowing it came from the city attorney. Yet the judge still agreed to hear the case. Where is the justice in the judicial system?

Although our lawsuit halted implementation of the Bayview Hunters Point Redevelopment Plan, Redevelopment is already in full control of Parcel A of the Hunters Point Shipyard, where the Florida-based rogue developer Lennar has been tearing down a hill and kicking up asbestos-laden toxic dust for three years. In one recent day, on Jan. 9, Lennar’s stock dropped 28 percent on accusations of fraudulent business practices – operating joint ventures as Ponzi schemes.

Mayor Gavin Newsom, our District 10 Supervisor Sophie Maxwell and then Board of Supervisors President Aaron Peskin, who connived against us with Dennis Herrera, had been shocked that the Defend Bayview Hunters Point Committee could collect so many signatures. Always siding with Redevelopment and Lennar and other big developers, they don’t care that our children are being poisoned or that our land may soon be seized.

But they also know that the people of San Francisco are with us and that we’re steadily winning more allies. They know that we hold town hall meetings every Thursday at 7 p.m. at Grace Tabernacle Community Church, 1121 Oakdale at Ingalls, a stone’s throw from the Shipyard, where the community is informed, forewarned and forearmed. Recently, due to community pressure, the Bay Area Air Quality Management District fined Lennar $515,000, the largest fine they have every imposed.

The Supreme Court decision allows the Bayview Hunters Point Redevelopment Plan to be implemented. We will have to watch the Redevelopment Agency, the mayor, the city attorney, the Board of Supervisors and the big developers they promote and protect like a hawk to stop the land grab. We’ll need the help once again of the good people of San Francisco and people of good will everywhere to watch their every move. You don’t need to be able to be able to recognize the individual culprits. They’re the ones with blood on their hands.