“Of all the forms of inequality, injustice in health care is the most shocking and inhumane.” – Dr. Martin Luther King Jr. 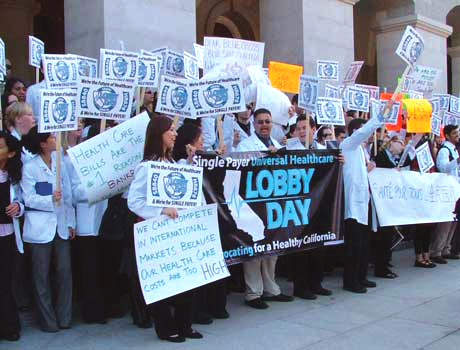 The California Universal Health Care Organizing Project wants President Obama to support congressional legislation authored by Rep. John Conyers that will stop the private health care insurance industry from denying claims, neglecting the sick and wasting 31 cents of every health care dollar. HR 676 is the United States National Health Insurance Act. Called the “Medicare for all” bill, it offers the federal Medicare system as a prototype to expand health care coverage to every American, regardless of employment status or ability to pay. Medicare is our federal publicly funded health insurance program for seniors and the disabled.

President Obama’s stimulus bill contains health care provisions that may incrementally establish the foundation for a nationalized health care system. It enacts the electronic tracking of medical records on a federal level and establishes the National Coordinator of Health Information Technology to monitor treatments that are both appropriate and cost effective with a goal to reduce costs and guide treatment decisions.

Obama touched our hearts recounting the tragedy of his uninsured mother’s struggle to pay for medical care when she was sick with ovarian cancer.

The $65 billion health care reform plan offered by Obama to address the escalating costs of treatment and prescriptions and to provide access and care for 45.7 million uninsured Americans includes a requirement that insurance companies cover preexisting conditions. It ensures a tax credit for premiums and requires large employers who don’t offer health insurance to contribute a percentage of payroll towards the costs of employee health care. Additionally, the Obama plan establishes a National Health Insurance Exchange with a range of private insurance options to allow individuals and businesses to buy health coverage.

Obama has proposed what can rightfully be called a Universal Health plan … but is not single payer. It is not the solution for millions of part time, self employed and underemployed workers who believe in health care reform for all regardless of ability to pay: health care rooted in radical change, revolutionary change, “change we can believe in!”

Why do we need single payer health care? Well, imagine that your car broke down and you took it to a mechanic to have it fixed. You were offered an estimate for fixing your vehicle that was higher than you believed it should cost but you felt pressured to get your car back and did not want to have it towed to another mechanic. You agreed to pay the mechanic for the cost of repairs but on the day you came to get your car you received not one bill for service from the mechanic … but 10 bills! The parts department, the tire company, the electrical wiring contractor and the mechanic all generated separate bills demanding payment for fixing your car.

That’s how health care systems act in the United States that are not founded on single payer principles. Medicare, Medical and the Veterans Administration hospitals are examples of single payer systems, but they do not provide universal health care to everyone.

The insurance industry acts like a middleman for your health care dollar. They take your money, charging high premiums and setting high deductibles. They exclude patients who are sick, have preexisting conditions or high risk factors like smoking, hypertension or obesity. Then they tell doctors which patients are eligible for life saving services like heart surgery or MRI scans.

The health disparities that are seen in low income communities of color are rooted in our current health care system. It has been proven that African Americans, Latinos and Asians are less likely to receive standard of care interventions when they present with symptoms of serious disease

According to long time advocates of “Single Payer Now” like myself, “We have a broken health care system. We have a monster insurance bureaucracy that wastes at least 31 cents of every health care dollar, but fails to give us health security.” Because we don’t have a state or national health care plan, 6.7 million Californians are uninsured. Medical bills bankrupt millions of people every year and the United States is ranked 37th in health care outcomes by the World Health Organization.

Despite the inefficiency of our health care system and its inequities, the U.S. spends two to four times as much money per person as other nations. As early as 2005, the British Medical Journal predicted in an editorial that funding the war on terror would threaten the lives of Americans as resources were shifted away from medical research and public health services. Perhaps the single greatest challenge to our country’s greatness is evident in the fact that, as a result of the epidemics of obesity, diabetes, and heart disease, for the first time in history we have given birth to a generation of children whose projected life expectancy is below that of their parents.

The solution is to win legislation for a plan that delivers high quality health care for all and spends our money wisely. In California, Sen. Mark Leno courageously agreed to reintroduce Senate Bill 840, the California Universal Healthcare Act, last month. SB 840 is publicly accountable and covers all Californians. It provides comprehensive benefits, including full dental, vision, mental health and prescription drug coverage as well as full choice of provider.

SB 840 spends money wisely by eliminating the bureaucracies created by thousands of insurance plans and saves money by using the bargaining power of over 37 million Californians to lower the cost of prescription drugs. SB 840 pools government health care funds with affordable premium payments from employers and individuals.

SB 840 is expected to be heard in committee in early April and a huge Sacramento mobilization will be galvanized. Busloads of people will go to the state capitol to urge representatives to sign on to the resurrected bill. On Jan. 12, 2009, I traveled by bus to Sacramento with a host of single payer activists from the Bay Area to attend the Medical Students Lobby Day. It was glorious to behold 500 medical students from schools around the state in their white coats rallying for single payer health care. Our delegation met with San Francisco representatives Assemblyman Tom Ammianno, Senate Vice President Leland Yee and Assemblywoman Fiona Ma.

On Saturday, March 7, 2009, at 3 p.m., a panel of activists from Single Payer Now will address the topic, “What Gov. Schwarzenegger Needs to Know About Healthcare Reform.” The discussion will be held at Centro del Pueblo, 474 Valencia St. at 16th in San Francisco. Speakers include Fran Devlin, RN, a health activist; Don Bechler, chair of Single Payer Now and past officer of Machinists Union locals; Ian McLean, past president of the American Federation of Government Employees; and Rory Michaelis, a biostatician at a global clinical research firm.

I will be there and I hope you will be there too! This is a great cause and history in the making. Health care reform will be on the ballot eventually. If we pass legislation in Sacramento, the insurance industry will place an initiative on the ballot to overturn our victory. Winning a ballot initiative requires systematic campaign organizing precinct by precinct.

The good news is that a recent survey conducted by Women’s Health Journal analyzed how 100 U.S. cities stack up when it comes to health, fitness and quality of life. Thirty-eight factors were tallied, including cancer rates, air quality, commute times and the number of residents who regularly use their gym passes.

San Francisco ranked number 2 overall and boasts one of the lowest diabetes death rates in the country. In July of 2006, San Francisco blazed the way towards the creation of a public health access program for the 82,000 adult residents who are uninsured. The Health Access Program was launched with the requirement that businesses make reasonable health care expenditures on behalf of their employees to reduce the burden on San Francisco taxpayers for providing health care to the uninsured. While it can rightfully be called a universal health plan … it is not single payer!

The bad news is the Department of Public Health has been offered as the “sacrificial lamb on the altar” of 2008 mid-year budget cuts to lessen the “hemorrhaging” of the 2009-2010 budget cycle.

The Health Care Security Ordinance that promulgated Healthy San Francisco recognized the city’s vital interest in preventing a “race to the bottom” in which employers stop paying for employee health care to remain competitive and instead shift those costs to the city’s taxpayers. The problem with employer paid health expenditures is editorialized in the winter 2008 issue of the Healthcare Journal of Northern California:

“When cash is limited for the unemployed, the rent, food, car and other basic necessities get paid first. Health insurance is one of those expenses that can go unpaid if the family is healthy. Physicians and hospitals will continue to have uninsured patients who can’t pay their bills, forcing providers to charge inflated prices to cover the costs of treating the uninsured who can’t pay their bills. But when all patients are insured, the benefits trickle up to providers as well.”

The 2007 California Employer Health Benefits Survey tells a story of escalating health care costs in a state that outdistances others in terms of rising health care premiums. Nearly half of large employers reported they were likely to increase the amount employees contribute to their health plan. Thirty-seven percent of large employers (those with 200 or more employees) said they would boost the employee portion of the cost for prescription drugs, while 36 percent said they would increase the amount employees pay for their premiums.

In April of 2005 the Board of Governors of the American College of Physicians met to address the flawed reimbursement system and its impact on physicians, payers and patients.

For more information and to get involved, visit www.singlepayernow.net or call (415) 695-7891. Bay View Health and Environmental Science Editor Dr. Ahimsa Porter Sumchai can be reached at (415) 835-4763 or asumchai@sfbayview.