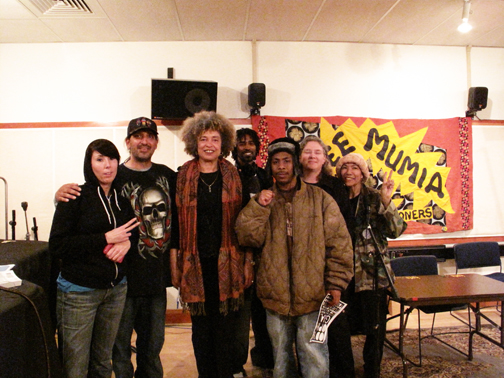 Angela Davis, the legendary political activist professor in the UC system, personifies resistance. A former political prisoner who has worked within the Communist Party, she’s authored eight books analyzing race, class and gender and she cofounded the prison abolitionist group, Critical Resistance. She sat down for an interview with the Block Report to promote political prisoner Mumia Abu Jamal’s new book “Jailhouse Lawyers” by talking about her contribution: the foreword.

Angela Davis was one of the first political prisoners I learned about. Later, the first jailhouse lawyer I met – through the mail – was her codefendant, Ruchell Magee, who is still locked up.

This book gave me better insight into what life as a jailhouse lawyer really is like. I dug the fact that Mumia picked a subject that is rarely discussed on this side of the walls. I learned a lot and it whetted my appetite to learn more about these legal warriors.

Check out Angela Davis as she talks about her foreword in Mumia’s new book, in her own words …

M.O.I. JR: I want to talk to you today about your foreword in Mumia Abu Jamal’s new book, “Jailhouse Lawyers.” Since I know a lot of readers do not have the book, I want to start off with reading a few quotes, and I will ask you questions in relation to the quotes.

You say in your foreword: “Mumia points to what was for me a startling revelation: Jailhouse lawyers comprise the group most likely to be punished by the prison administration – more so than political prisoners, Black people, gang members and gay prisoners. Whereas jailhouse layers are now punished by what Mumia calls ‘cover charges,’ historically they could be charged with internal violations for no other reason that they used the law to challenge prison guards, prison regimes and prison conditions.”

In your opinion, what is the importance of Mumia choosing jailhouse lawyers to be the subject for his new book?

Angela Davis: Well, first of all, this is an amazing book. Everyone should read this book. And I was extremely excited to learn that he was working on a book on jailhouse lawyers because the story of jailhouse lawyers is a hidden story. Most people in this country are not aware of the extent to which resistance to the regimes of prisons – state prisons, federal prisons – all over the country, has been shaped through the work of jailhouse lawyers.

There is a long tradition of resistance. And Mumia himself is a jailhouse lawyer. And if one thinks about how many men and women have used the law in order to challenge the prison regimes, one gets a sense of what a powerful legacy that resistance is.

M.O.I. JR: In another quote in your foreword you say, “Mumia argues that the passage of the Prison Litigation Reform Act (PLRA) is a violation of the Convention Against Torture, for in ruling out psychological or mental injury as a basis to recover damages, such sexual coercion as that represented in the Abu Ghraib photographs, if perpetrated inside of a U.S. prison, would not have constituted evidence for a lawsuit.”

Why did you point this out in your foreword?

Angela: Many people assume that the PLRA, the Prison Litigation Reform Act, as I tried to point out in the foreword, simply prevents prisoners from engaging in frivolous lawsuits. But, as Mumia points out, it is a pointed attack on the capacity of prisoners to use the law itself. It is not about frivolity at all; it is about taking away from prisoners one of the only instruments that they’ve been able to develop to challenge the whole system. So we can’t assume that under the Clinton administration the PLRA was passed and that put prison lawsuits to rest. It’s important for those of us on the outside to support the rights of prisoners to use the law to resist the violence of the state.

M.O.I. JR: Again to quote you, you say in the foreword of “Jailhouse Lawyer”: “The way he situates the PLRA historically – as an inheritance of the Black Codes, which were themselves descended from the slave codes – allows us to recognize the extent to which historical memories of slavery and racism are inscribed in the very structures of the prison system and have helped to produce the prison-industrial-complex.”

Can you discuss the importance of Mumia making this connection in “Jailhouse Lawyers”?

Angela: Well, this is one of the things that I really love about Mumia; he knows how to make these historical connections. He makes connections with what might appear to be very disparate and different kinds of phenomena. For example, he points out that the PLRA was passed at the same time as the disestablishment of the welfare system and that there is a connection between preventing women primarily from having access to safety nets for their families and this assault on prisoners being able to defend themselves.

So I really like the way that he makes those connections with slavery. I think of the prison system today in this country – and especially the system of capital punishment – I think of it as a historical memory of slavery, as a palpable inheritance of slavery. And, as a matter of fact, the existence of those systems provides us with real evidence of the fact that slavery was not fully abolished. So I like the way in which he can show us the similarities between the Black Codes that were produced in the aftermath of slavery to basically replicate the system of slavery after slavery was allegedly abolished. And the PLRA serves a similar contemporary purpose.

It’s important for those of us on the outside to support the rights of prisoners to use the law to resist the violence of the state.

M.O.I. JR: Again, you write in “Jailhouse Lawyers,” in the last sentence, “He (Mumia) allows us to reflect upon the fact that transformational possibilities often emerge where we least expect them.” Why did you end your foreword with that statement in this book?

Angela: Well, you know, because people don’t usually think of prisoners in general as defending democracy. They think of the prison as the underside, the underbelly, of democracy, as the place where you send people who no longer have the right to be citizens.

M.O.I. JR: What is the importance of us recognizing that Mumia is facing death right at this second, right when he released such an eloquent book on jailhouse lawyers? You also pointed out in this foreword that he rarely speaks of himself, so in the midst of this being a time of the first Black president of America, what does Mumia’s imprisonment, with all the flaws in his case, say about the real political climate in America?

Angela: Well, first of all, Mumia’s case is so important for us to get involved in. We have to save his life. We have to free Mumia. And yeah, as many people acknowledge, he rarely uses his amazing talent and capacities to advocate for himself. He’s always advocating for others, and that is all the more reason to be passionate advocates for him.

I have traveled in other parts of the world a great deal, and there are movements to free Mumia all over the world. Sometimes I feel very embarrassed that we have not managed to overcome the power of the Fraternal Order of Police, for example, and the other conservative forces that are determined to put Mumia to death.