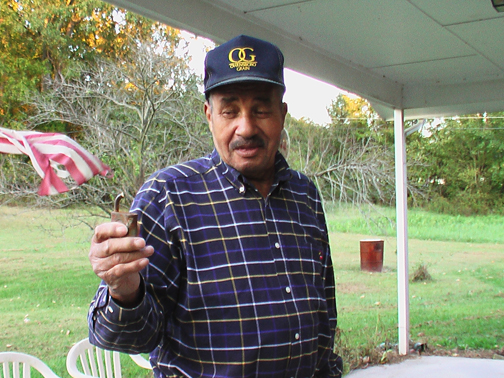 Harry Young, an 82-year-old Black farmer from Owensboro, Kentucky, was arrested and released on $50,000 bond in connection with allegations of threatening U.S. Department of Agriculture employees – terroristic threatening. It all stems from a contested foreclosure and sale of his family farm in 2005.

Young was arrested on allegations that he threatened a federal employee of a farm agency last week via phone. Supporters are questioning the arrest on those allegations, particularly given the fact that Young has consistently maintained an orderly, legal attempt to regain his land and has been in plain sight, presenting his case to Congress and to the world and working his rented fields for years.

Young says he never made threats to “blow something up,” and supporters question whether the allegations have merit, particularly because of the state of feud that has existed between Young and the Farm Service Agency (FSA) office in Owensboro.

Since the foreclosure and auction of his Utica, Kentucky, farm in 2005, Young has given interviews, written hundreds of letters to Congress and newspapers and has testified before Congress. And he has made enemies along the way, in and out of government.

Young’s outspokenness has generated enmity from supremacists and hate groups. His property has been vandalized and he has also been the target of terrorist threats by phone. The situation has been so volatile that the county sheriff advised him to carry a gun.

Vandals have shot at his house. They have pulled protest signs from his front yard on several occasions. In 2007, supremacist groups reportedly trespassed on his rented fields. When he secured the fields with a locked gate, trespassers cut the locks and chains and pulled gateposts out of the ground with a tractor.

Long before the current foreclosure fraud and Wall Street mortgage meltdown began generating headlines, Young and farm rights supporters maintained that the Farm Service Agency and the United States Department of Agriculture had major problems in the loan application process. 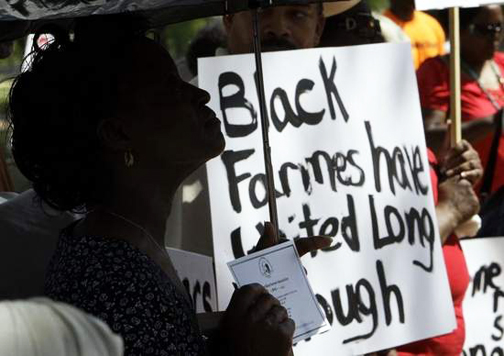 Civil rights activists and audits noted problems in loan servicing, document forgery, conflicts of interest and employees benefitting from bonuses from foreclosing on loans they serviced that maintain a hostile environment for minority employees and farmers alike. Noting the endemic institutional racism and anti-family farmer bias within the USDA, more than one author has called it the “Last Plantation.”

Even after years of investigations, lawsuits and congressional hearings, critics say the agency remains biased against farmers of color and family farmers. According to Secretary of Agriculture Tom Vilsack, the agency still has problems. Secretary Vilsack told a group of Black farmers at a conference sponsored by the Federation of Southern Cooperatives and the Land Assistance Fund, “Some folks refer to USDA as the last plantation, and it has a pretty poor history of taking care of people of color.” (Congress Daily, 2-23-09)

Historically, agency employees have been downright antagonistic, spending careers working in a culture of institutional bias, which has existed for generations. Critics say the agency has been practicing agism, sexism and racism for so long that discrimination against minority employees and farmers is as much a part of the culture as the paperwork the bureaucracy generates. “You’ve got outright bias and discrimination. Also you’ve got good people who don’t even know that they’re discriminating,” said Vilsack. “It’s necessary to begin the process of re-educating people.” (Ibid)

Activists say “business as usual” in the agency includes document forgery, identity theft and collusion with local real estate developers, favored white farmers and county deed registration offices. Documents have reportedly been destroyed in some local farm loan offices, and farmers around the country have voiced complaints over alleged foot dragging and obstruction of Freedom of Information (FOIA) requests to the agency. Many say the information in their files is not accurate and contains forged or incomplete documents in tens of thousands of foreclosure cases and that many documents are missing as well.

Young says he has a signed document from the local Farm Service Agency supervisor that his loan was paid.

While Young maintains that he has never had his day in court, the government says he has had a day in court, represented by a local attorney. Young claims he never hired the man. Land theft activists say that at one time it was common for white attorneys to “represent” Black clients who never hired them, in favor of biased interests who wanted the Black victim’s land or property.

Historic problems in the Farm Service Agency continue. Family farmers and Black land owners continue to be victimized by the system. White employees within the system worked in a culture of racism and bias toward large farm operations. Lawrence Lucas, a retired USDA employee who was one of the whistleblowers in the historic Pigford vs. Glickman “Black Farmers Case,” says: “Racism and sexism is institutionalized and perpetuated. We’re not just talking about Black farmers but Hispanic farmers, women farmers.” (USDA Coalition of Minority Employees)

Land theft activists say that at one time it was common for white attorneys to “represent” Black clients who never hired them, in favor of biased interests who wanted the Black victim’s land or property.

According to Donald Burger, a retired federal employee and former director Iowa Civil Rights Commission, “Harry Young’s case is one of the best documented examples of the collaboration between the Department of Agriculture Office of General Counsel and the prolonged failure of the Office for Civil Rights within the Department of Agriculture in providing a remedy. It is encouraging that Secretary Vilsack has appointed a special assistant who formerly served as director of the Office of Civil Rights in the Clinton administration. His name is Lloyd Wright.”

Burger says, “Mr. Wright met with a delegation of Black farmers last month to discuss the nature of complaints nationwide on ongoing problems within the Office of General Counsel abetted by the U.S. Department of Justice Michael Sitkof and dozens of U.S. Attorneys nationwide.”

According to the Evansville Courier Press, the warrant for Young’s arrest alleges he asked a USDA staff member during a phone call, “Do I have to get attention by going down to the (Agriculture Stabilization and Conservation Service) office and shooting somebody or blowing something up?”

If he is convicted at trial, which is set to begin June 30, the 82-year-old could face up to five years in prison.

Young denies threatening anyone, the Courier Press reports, but says officials are out to get him because “they stole a million (dollars) off me. I want it back.”

Friends and supporters of Harry Young have set up a legal defense fund for his civil land theft case. Donations are encouraged to help him win not only for himself but to set a critical legal and historic precedent.

Monica Davis is an Indiana-based author, columnist and public speaker. She specializes in economic, history and public policy issues and has written articles on land loss, bank failure, environmental justice and alternative energy. She is published in Great Britain, the U.S. and India and home schoolers in New Zealand have used her articles as teaching tools. Ms. Davis has given presentations on land lynching and the farm catastrophe at churches, museums and universities. Her articles have been read into the Congressional Record and used as the basis for interviews by other reporters. She is available for speaking engagements. Her author web site is http://www.lulu.com/davis4000_2000. She may be reached at davis4000_2000@yahoo.com. Bay View staff contributed to this report.