Hear Brother Chokwe Lumumba, Black liberation movement attorney and chairman of the New Afrikan People’s Organization, and Brother Clarence Thomas, leader of International Longshore and Warehouse Union Local 10, co-chair of the Million Worker March Movement, and activist with the African American Longshore Coalition. This interview was a collaboration between DJ Asik of Pirate Cat Radio, 87.9FM, San Francisco, and Education Not Incarceration and Brian Wiles of The Organizer newspaper.

In the interview, Brother Thomas, a longtime Black liberation activist, talks about his recent trip to Cuba as part of a U.S. trade union delegation and about the Workers Economic Recovery Campaign recently launched by Bay Area county labor councils to stop foreclosures and layoffs and fight for the nationalization of the banking industry, among other important political objectives. 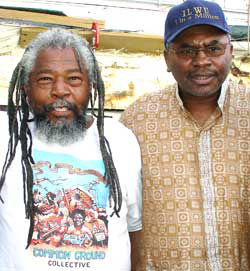 Brother Lumumba, co-founder of Malcolm X Grassroots Movement, attorney for Tupac Shakur, Assata Shakur and Dr. Mutulu Shakur, People’s Advocate at the September 2007 International Tribunal on Katrina in New Orleans and former vice president of the Republic of New Afrika, speaks about his city council campaign in Jackson, Mississippi, and his recent victory in the primary election in which Chokwe won 43 percent of the vote in an eight-candidate race, with over 80 percent voter turnout. He discusses his election strategy of building grassroots People’s Assemblies and comments on the irony of running on the Democratic Party ticket while calling for an independent Black Political Party.

Brother Chokwe will compete in the runoff election on May 19, coincidentally Malcolm X’s birthday.

To learn more and get involved: