News from New York and a message from Troy 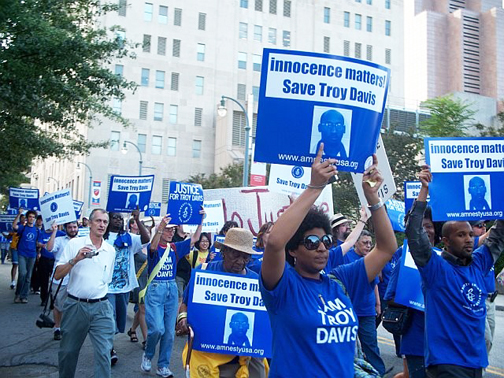 On May 19, from Alaska to West Virginia and from Argentina to Uganda, high school and college students, faith-based groups and progressive community organizations are organizing vigils, rallies and petition drives as well as the vital means of communication to bring worldwide pressure on Georgia Gov. Sonny Perdue and the Pardons and Parole Board to stop the execution of Troy Anthony Davis.

Davis was convicted as a teenager of the 1991 killing of an off-duty Savannah policeman, solely on the basis of inconsistent eyewitness testimony, and sentenced to death.

Despite recantations by seven of the nine trial witnesses and the exculpatory statements of additional witnesses pointing to another man as the shooter, U.S. courts have refused to allow Davis a hearing to present the new evidence. Many of the witnesses cite police intimidation and threats as the reason for their false statements at the highly charged trial.

Without those tainted testimonies and lacking any physical evidence at all linking Davis to the murder, the prosecution’s case would have consisted of two witnesses – the man now alleged to have committed the killing and a member of the U.S. military who on the night of the incident told police he was unable to identify the shooter. Yet two years later in court, he pointed to Troy Davis.

Davis has always maintained his innocence.

Hundreds of thousands of people in the U.S. and around the world are outraged by the obvious injustices of this case. Davis has twice come within days and even hours of being executed when in the midst of grassroots mobilization, state and federal authorities have intervened.

On April 16, the 11th Circuit Court of Appeals ruled 2-1 against Davis’ appeal, essentially denying possible innocence as a sufficient reason to overturn the trial verdict.

While Davis’ lawyers mount an appeal to the U.S. Supreme Court, which has previously failed to hear his case, organizations such as Georgians for an Alternative to the Death Penalty, Amnesty International and the NAACP are calling on people to flood the governor’s office and the Pardons and Parole Board with letters, e-mails, faxes and phone calls.

For information on the locations of actions in support of Troy Davis on May 19, go to www.gfadp.org. This site also has downloadable flyers, the addresses of Georgia officials, the text of an online letter and background information on the case.

The rally will be held at Union Square, between 15th and 16th Streets, from 6 p.m. to 8 p.m. Emceed by Amnesty International USA’s Rosa Clemente, it is one of more than 100 events occurring in ‘most every U.S. state and around the world that day. At the event, Clemente will read a statement from author Alice Walker, and the event will include musical performances by Welfare Poets, Rebel Diaz and Oscar-nominated group Impact.

Despite a strong case of innocence, to date Davis’ appeals have been denied at all levels of the government based on technicalities; most recently the 11th Circuit Court of Appeals denied Davis’ request for a new trial or evidentiary hearing. Those who have spoken out against the execution include Bob Barr, Archbishop Desmond Tutu, William Sessions and Pope Benedict XVI. Davis, whose stay of execution was lifted on May 16, has already been scheduled for execution three times – once coming within an hour and a half of his death.

Death row prisoner Troy Davis: We must expose a system that fails to protect the innocent

by Martina Correia, Campaign to End the Death Penalty 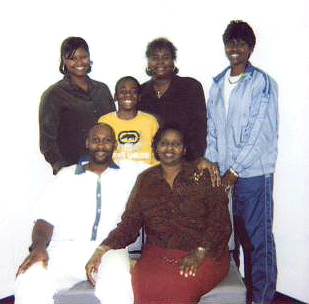 Martina Correia has spearheaded the fight for justice for her brother, Troy Davis, who has spent 18 years on Georgia’s death row despite overwhelming proof that he is an innocent man. Troy has faced three execution dates in two years, and won a stay each time. Despite facing a battle with breast cancer herself, Martina has led a national and international struggle to win justice for Troy.

At the National Convention of the Campaign to End the Death Penalty last fall, Martina gave brief remarks and then read a statement from Troy.

“Good evening. My name is Martina Correia, and I’m from the distant planet of Georgia. For those of you who don’t know about my brother, Troy Anthony Davis was convicted in 1991 of killing an off-duty police officer. He was trying to help a homeless man.

“Someone went and told the police that my brother had shot and killed this police officer. They used nine eyewitnesses to convict my brother and sentence him to death. Seven of those witnesses have since recanted, and yet the state of Georgia still wants to execute my brother – even though they have no physical evidence, no weapon, no motive, no anything.

“Here is the message from my brother, Troy Anthony Davis:

“‘I want to thank all of you for your efforts and dedication to human rights and human kindness. In the past year, I have experienced such emotion, joy, sadness and neverending faith.

“‘It is because of all of you that I am alive today. As I look at my sister Martina, I am marveled by the love she has for me – and, of course, I worry about her and her health. But as she tells me, she is the eldest, and she will not back down from this fight to save my life and prove to the world that I am innocent of this terrible crime.

“‘As I look at my mail from across the globe, from places I have never ever dreamed I would know about, and people speaking languages and expressing cultures and religions I could only hope to one day see firsthand, I am humbled by the emotion that fills my heart with overwhelming, overflowing joy.

“‘I cannot answer all of your letters, but I do read them all. I cannot see you all, but I can imagine your faces. I cannot hear you speak, but your letters take me to the far reaches of the world. I cannot touch you physically, but I feel your warmth every day I exist.

“‘So thank you, and remember I am in a place where execution can only destroy your physical form, but because of my faith in God, my family and all of you, I have been spiritually free for some time. And no matter what happens in the days and weeks to come, this movement to end the death penalty, to seek true justice, to expose a system that fails to protect the innocent must be accelerated.

“‘There are so many more Troy Davises. This fight to end the death penalty is not won or lost through me, but through our strength to move forward and save every innocent person in captivity around the globe.

“‘I want you to know that the trauma placed on me and my family as I have now faced execution and the death chamber three times is more punishment than most can bear. Yet as I face this state-sanctioned terror, I realize one constant – my faith is unwavering, the love of my family and friends is massive, and the fight for justice and against injustice by activists worldwide has ignited a fire that is raging for human rights and human dignity.

“‘We must dismantle this unjust system, city by city, state by state and country by country. I can’t wait to stand with you, no matter if that is in physical or spiritual form. I will one day be announcing, “I AM TROY DAVIS, and I AM FREE!”

“‘Never stop fighting for justice, and we will win!'”

For more information, visit www.troyanthonydavis.org and www.amnestyusa.org/troydavis. Sign the petition!