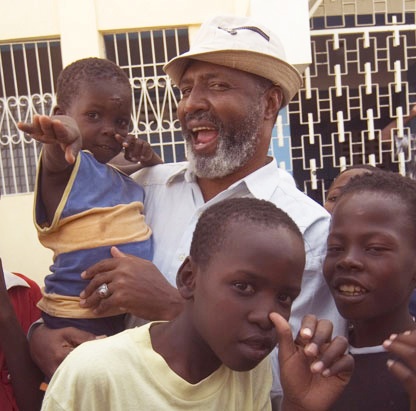 Though Haitian priest Father Gerard Jean-Juste died May 27, 2009, at age 62 in Miami from a stroke and breathing problems, he remains present to millions. Justice-loving people worldwide mourn his death and celebrate his life. Pere Jean-Juste worked uncompromisingly for justice for Haitians and the poor, both in Haiti and in the U.S.

Pere Jean-Juste was a Jesus-like revolutionary. In jail and out, he preached liberation of the poor, release of prisoners, human rights for all and a fair distribution of wealth. A big, muscular man with a booming voice and a frequent deep laugh, he wore a brightly colored plastic rosary around his neck and carried another in his pocket. When he was jailed for nearly a year in Haiti by the U.S.-supported coup government which was trying to silence him, Amnesty International called him a Prisoner of Conscience.

Jean-Juste was a scourge to the unelected coup governments of Haiti, who served at the pleasure – and usually the direction – of the U.S. government. He constantly challenged both the powers of Haiti and the U.S. to stop killing and starving and imprisoning the poor. In the U.S., he fought against government actions which deported Black Haitians while welcoming Cubans and Nicaraguans and others. In Haiti, he called for democracy and respect and human rights for the poor.

Pere Jean-Juste was sometimes called the most dangerous man in Haiti. That was because he was not afraid to die. His computer screen saver was a big blue picture of Mary, the mother of Jesus. “Every day I am ready to meet her,” he once told me, when death threats came again. “I will not stop working for justice because of their threats. I am looking forward to heaven.”

Jean-Juste was literally a holy terror to the unelected powers of Haiti and the elected but unaccountable powers of the U.S. Every single day, in jail or out, he said Mass, read the psalms and jubilantly prayed the rosary. In Port au Prince, he slept on the floor of his church, St. Claire, which provided meals to thousands of starving children and adults every week. In prison, he organized local nuns to bring him hundreds of plastic rosaries which he gave to fellow prisoners and then lead them in daily prayer. 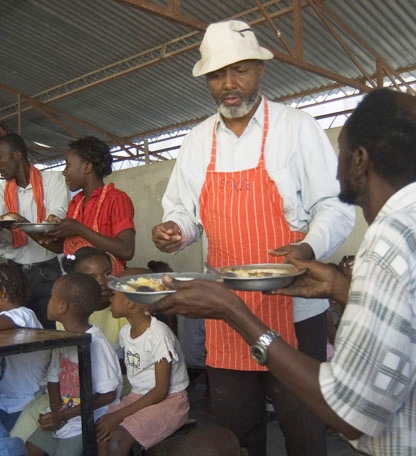 To the rich, Jean-Juste preached that the man with two coats should give one to the woman with none. But, unlike most preachers, he did not stop there. Because there were many people with no coats, Pere Jean-Juste said, no one could justly claim ownership of a second coat. In fact, those who held onto second coats were actually thieves who stole from those who had no coats. In Haiti and the U.S., where there is such a huge gap between the haves and the have-nots, there was much stealing by the rich from the poor. This was revolutionary preaching.

During the day, people streamed to his church to ask for help. Mothers walked miles from Cite de Soleil to his parish to beg him to help them bury their children. Widows sought help. Families with sons in prison asked for a private word. Small packets of money and food were quietly given away. Visitors from rural Haiti, people seeking jobs, many looking for food, police officers who warned of new threats, political organizers with ideas how to challenge the unelected government, reporters and people seeking special prayers – all came all the time.

Every single night when he was home at his church in Port au Prince, Pere Jean-Juste led a half hour public rosary for anyone who showed up. Most of the crowd was children and older women who came in part because the church was the only place in the neighborhood which had electricity. He walked the length of the church booming out the first part of the Hail Mary while children held his hand or trailed him calling out their part of the rosary. The children and the women came night after night to pray in Kreyol with Mon Pere.

Pere Jean-Juste lived the preferential option for the poor of liberation theology. Because he was always in trouble with the management of the church, who he also freely criticized, he was usually not allowed regular church parish work. In Florida, he lay down in his clerical blacks on the road in front of buses, stopping them from taking Haitians to be deported from the U.S. For years he lived on the run in Haiti, moving from house to house. When he was arrested on trumped up charges, he refused to allow people with money to bribe his way out of jail; he would stay with the poor and share their treatment. 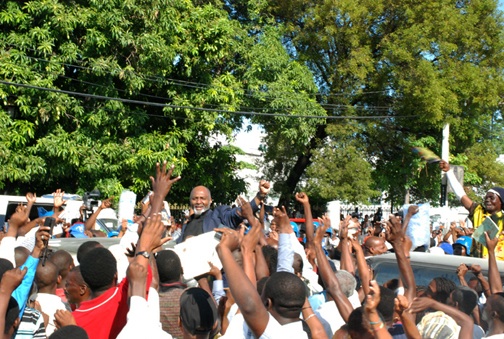 He dedicated his entire adult life to the revolutionary proposition that every single person is entitled to a life of human dignity. No matter the color of skin. No matter what country they were from. No matter how poor or rich. No matter woman or man.
His last time in court in Haiti, when the judge questioned him about a bogus weapons charge against him, Pere Jean-Juste dug into his pocket, pulled out his plastic prayer beads, thrust them high in the air and bellowed, to the delight of the hundreds in attendance, “My rosary is my only weapon!” The crowd roared and all charges were dropped.
Gerard Jean-Juste lived with and fought for and with widows and orphans and those in jail and those being deported and the hungry and the mourning and the sick and the persecuted. Our world is better for his time among us.

Mon Pere, our brother, your spirit, like those of all who struggle for justice for others, lives on. Presente!

Bill Quigley represented Pere Jean-Juste many times in Haiti along with the Bureau des Avocats Internationaux in Port au Prince and the Institute for Justice and Democracy in Haiti. He is on leave from Loyola University College of Law in New Orleans serving as legal director of the Center for Constitutional Rights. He can be contacted at quigley77@gmail.com.

Rev. Gerard Jean-Juste, known lovingly as Father Gerry, the great Haitian freedom fighter, the priest who practiced liberation theology, who fed hundreds of children daily, who regularly challenged presidents and popes and who would have been president of Haiti had he not been jailed, thanks the San Francisco Bay View newspaper, www.sfbayview.com, for beating the drum to help set him free. He joined the ancestors May 27, 2009, and all who loved him must fight more fearlessly and love more boundlessly to fill the void.