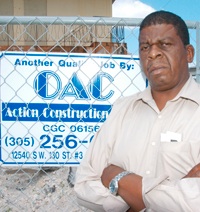 Miami – A historic motel that served as a haven for Black entertainers during segregation is now at the center of a racial discrimination protest.

The Hampton House Motel in Miami’s predominantly Black Brownsville section was one of the places where famous Black recording artists stayed during segregation after performing for all-white audiences on the beach. The performers were not allowed to stay in predominantly white hotels.

Miami-Dade County is restoring and renovating Hampton House after it fell into disrepair over the years. But ironically, the construction work on the Black historic site does not include any Black contractors, subcontractors or laborers.

“Jobs for Blacks in Miami are becoming an endangered species,” said Ken Knight, an activist and chairman of the Major Community Concerns committee of the Hadley Park/Model Cities Homeowners Association in the Brownsville community. “The Hampton House belongs to the Black community, and the Black community should be the people who rebuild that particular site. This is our heritage.”

Knight is leading a battle to get Blacks hired to perform work on the restoration of the historic Black motel and nightclub, work that is being mostly performed with the use of tax dollars.

Knight is adamant that those involved in the project are brushing him off because they are uncomfortable discussing the issue, but some acknowledge the point he is trying to make.

“He has a point,” said County Commissioner Audrey Edmondson, in whose district the project is located. “He has a legitimate point on some things I would like to see changed; however, I don’t think we would look too kindly on it if the Hispanic community would say they don’t want Blacks working in their communities.”

Edmondson has played a key role in getting the project off the ground and was recognized for her efforts at an April 9 unveiling of a rendering that shows what the completed project will look like. She said federal law prohibits race-based contracts, but she hopes that her other efforts will lead to increased opportunities for Black people on the project.

“And even once we do that, we can’t guarantee that a worker or a contractor of any other race will get the job,” she said.

So far, more than $4.7 million has been obtained through a government bond, philanthropic donations and other means for the project, which is now owned by Miami-Dade County. The county hires the contractors.

Enid Pinkney, the founding president and CEO of the Historic Hampton House Community Trust, Inc., a non-profit organization formed in 2002, is charged with restoring the motel to its glory days.

“To my knowledge, right now, there are no Black workers on the project,” Pinkney acknowledged. “However, we have had a conference with the company that is doing the work to let them know that we want to have people of the community as a part of what’s going on there, and the company has agreed that it’s willing to hire African Americans.”

Officials with the company, OAC Action Construction of Miami, could not be reached for comment.

Pinkney said the company is only doing the structural stabilization. She said the major portion of the project has yet to go out to bid, and she hopes Black contractors will be informed and will participate in that process.

She said the property is designated as a local historical site, and has a pending application with the U.S. Department of the Interior for designation in the National Register of Historic Places.

“We have to have workers who have specific training on historic sites,” she said. “They must know how to recognize what should be preserved and what can be thrown out. The people who are working there right now have to have certain qualifications that will not endanger the application that we have [with the Department of the Interior].”

The Hampton House Motel, called Booker Terrace during segregation, is located at 4200 NW 27th Ave. It opened its doors in 1954 and quickly became a haven for some of the country’s most notable Black athletes, musicians, movie stars and civil rights leaders.

The hotel featured luxury accommodations for that era, including 24-hour room service, valet parking and a world-class jazz club that attracted legendary performers such as Duke Ellington, Count Basie and Nancy Wilson, among others.

At the time, Black people were allowed to perform at white establishments, before all-white audiences, but they were prohibited from staying at motels or frequenting nightclubs on the east side of the railroad tracks or the beach. After completing their performances, many headed to the Hampton House to rest and party.

For these reasons, and because of the motel’s famous nightclub, Sammie Davis Jr., Jackie Robinson and Malcolm X were regulars when visiting Miami.

Dr. Martin Luther King Jr. put the finishing touches on his renowned “I Have a Dream Speech” there.

On Feb. 25, 1964, Cassius Clay, who later changed his name to Muhammad Ali, upset reigning heavyweight champion Sonny Liston in their famous title fight at Convention Hall in Miami Beach. After the fight, Clay and his entourage headed back west across the tracks to the Hampton House, where the victory party took place.

After desegregation, Blacks were able to frequent the beach, and that meant less business for the Hampton House. Eventually, the motel fell into disrepair, before finally closing its doors for good in 1976. Over time, the derelict building became an eyesore, and home to vagrants and drug addicts.

Amid complaints from residents, instead of being considered for restoration, it was deemed an unsafe structure and was a candidate for demolition. If not for the efforts of local pioneers who remembered the hotel’s heyday, it would have fallen victim to the wrecking ball by now.

One of those pioneers is Pinkney, who says that since 2001 she has worked to raise millions of dollars and garner support for the project. She questions those who are only now getting involved, and who now offer criticism.

“I’ve been working on this since 2001, and it has taken a lot of hope and faith to bring this particular project to this particular state that it’s in now, so we’re not putting all of this effort into this so that the community will be left out,” Pinkney explained. “You know, it’s regrettable to me that people are feeling that way.”

Pinkney said she has had several meetings and conversations with Knight over the issue. Even so, the controversy continues to brew. When county officials held the April 9 unveiling ceremony, Knight organized a protest, but police ended it prior to the event’s starting time.

“There was no reason for them to call the police,” Knight said. “I know it makes them uncomfortable for us to bring this up, but it has to be discussed. I used to be a part of the Hampton House Jazz Committee, which was the committee that really put everything in place as far as the Hampton House is concerned, and this is a great project, but it can be even better if they had some Black workers.”

Pinkney said there has not been a final estimated time of completion of the project, but when finished it will grace a cultural center on African-American history in Miami, along with exhibit and office space. There will also be music classes, a banquet hall and other amenities.

Knight said he has no issues with the renovation, that he only seeks economic opportunities for Blacks who live in the area.

“I would like to see inclusion. Let these work sites reflect the diversity that we have here in Miami-Dade County. And that’s not any one particular ethnic group,” Knight said. “We have a stew, if you will, a stew of people that needs to be reflected on any and all of these work sites.

And particularly in the Black community or African-American community, it’s important that those lead workers be Black workers.”

Elgin Jones, a staff writer for the South Florida Times, can be reached at EJones@SFLTimes.com.

Ken Knight talks about the lack of Blacks working on the Hampton House renovation project in Miami, Florida.

Enid C. Pinkney, founder and CEO of the Historic Hampton House Community Trust, responds to criticism that the renovation work on the Hampton House hotel and nightclub does not employ any Black workers and excludes Black contractors.