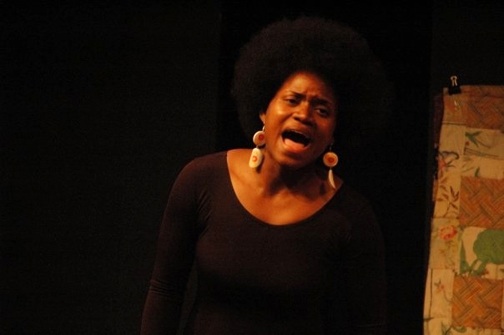 Drama has been a valuable art form to the Black experience in Amerikkka since before slavery. It was one of the ways that we maintained our history, although huge segments of the population couldn’t read or aren’t reading. I have only been to a few theatrical plays, but I love cinema, with some of the best dramatized movies to me being “dead presidents,” “Brown Sugar” and “Juice.”

I think that living in the low income Black community and speaking with expression goes hand and hand. Then, if you add youngstas mimicking the old folks, dramatization is an instinctual homegrown art form in the ghetto. The artist who goes by the name of Rie Shontel is one of few I’ve seen who has been able to capture this ghetto art form and put it on the stage, and she is currently in the process of making a career out of it. Check her out as she talks about her one-woman play, “Mama Juggs,” and her life as a thespian.

M.O.I. JR: Can you tell us about how you got into doing drama?

Rie Shontel: It all started in the living room of our East Oakland, California, housing apartment project on 13th Avenue in an area called “Funktown.” My mama would wake me in the middle of the night to entertain her friends while they played spades and drank Hennessey in the living room. I loved to pretend I was my mama hiding the colored television moments before the housing authority’s annual inspection. I also liked to pretend I was Whoopi Goldberg in “The Color Purple,” in the scene where she tried to stab Mister (Danny Glover).

My mama and her friends would belly laugh at my portrayals and then my mama would say, “All right, now. Take yo’ ass back to bed. You got school tomorrow!” I lived to bring laughter to people who were otherwise crying about living in poverty. I learned to tell their stories and we all laughed about how insane life was in our community.

I began living vicariously though their street-life experiences and embraced it as an opportunity to bypass many of the realities life in the projects presented. You know, many people in my community put me on their backs so that I could be the “one” to get out the projects. And for that I am forever grateful.

M.O.I. JR: What is the name and purpose behind your one-woman play? How did you come up with it?

Rie Shontel: My one-woman play is called “Mama Juggs: Three Generations Healing Fractured Images.” The purpose of this play is to celebrate how women in my family dealt with womanhood through their breasts. I play four characters: My great-grandma at 100, myself at 17, my mama at 47, and myself as a new mama at 27. Through them, I transport the audience into an intimate view of how the women in my family faced body image through late puberty, breast cancer, old age and breast-feeding.

I was inspired to write and perform “Mama Juggs” by my late great-grandma Suga. She would make up original, a cappella songs about everything-I-was-doing-wrong while breastfeeding. That mess used to drive me crazy, but I decided to write them down as part of my family’s history. A few years later, I sang the song she called “Titty Milk, Titty Juggs” at the Poetic Grove at the Eastmont Mall and it was a hit.

When I sang the song again at an artist gathering in North Carolina, one of the artists suggested I turn it into a play. The next day, I wrote the entire play in four hours flat. I then practiced it for six months for performances in Durham, North Carolina, and Oakland, California.

This all started because of the impression my great-grandma’s songs had on me.

M.O.I. JR: I understand that you are a college graduate. Has your degree helped you in your creative endeavors?

Rie Shontel: Yes, most definitely. I graduated from San Francisco State with a degree in broadcast and electronic communications with an emphasis on radio and television. It has enhanced my ability to take the knowledge I learned from observing elders, pimps, single mothers and drug addicts and apply it to the field of journalism.

M.O.I. JR: What has the response been among young Black women specifically and the public in general?

Rie Shontel: The feedback from young Black women has been tremendously positive. When I told them I was singing original songs by my 100-year-old great-grandma they responded, “I’m there, girlfriend!” And another sista said, “Hearing your mom talk about having breast cancer made me go home, take off my t-shirt, get in the mirror and rub my breasts looking for lumps, girl! Thank you.”

Generally, people say “Mama Juggs” taught them new facts about breast health and body image. Men who watched the play say they did not know they could get breast cancer. In the play, grandma talks about talk show host Montel Williams having a double mastectomy as a teenager.

M.O.I. JR: Where are you taking your drama skills? What is your goal as a thespian?

Rie Shontel: Because of the growing interest in “Mama Juggs,” my goal as a thespian is to perform the play in as many communities and venues as I can. Eventually, I wish to perform for breast cancer survivors, both men and women, worldwide.

Rie Shontel: My love of Black plays started when I found a copy of Lorraine Hansberry’s “A Raisin in the Sun” while digging through a pile of dumped clothes in West Oakland. While attending Oakland Technical High School, I was introduced to August Wilson’s play “Fences” by my drama teacher, Mr. Hamner. 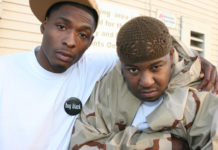