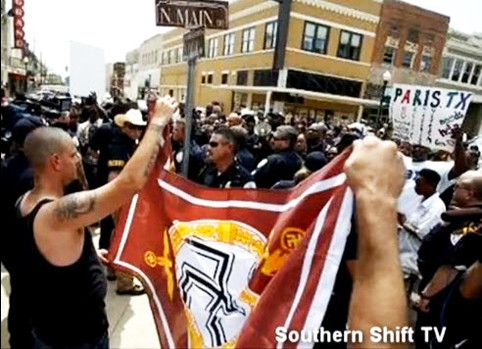 Madness went down in Paris, Texas, on Tuesday, July 21, as members of the New Black Panther Party and white supremacists squared off. The trouble took place when skinheads descended upon a rally held by members of the Black community to protest the Jasper-style dragging death of Brandon McClelland last September by two white men. In what appeared initially to be a slam dunk case, the special prosecutor Toby Shook said no charges would be pursued due to lack of evidence.

Brother Jesse Muhammad of the Final Call newspaper was one of the first to break this story. He was present at the rally on Tuesday and gave us an in-depth breakdown of what took place. You can peep out Brother Jesse’s blog here: http://jessemuhammad.blogs.finalcall.com/.

In the meantime, take a look at the footage from Southern Shift TV and the Associated Press (AP) and you can get a glimpse of what took place. As you watch this, ask yourself how and why is this happening in the Age of Obama and why isn’t race being discussed seriously as advocated by Attorney General Eric Holder.

Email Davey D at mrdaveyd@aol.com and visit daveyd.com. Listen to Davey on Hard Knock Radio Monday-Friday at 4 p.m. on KPFA 94.1 FM or kpfa.org.

Southern Shift TV video: Brother Jesse Muhammad of the Final Call newspaper reports to Davey D what took place July 21 in Paris, Texas, when Neo-Nazi and KKK members burst on the scene and tried to disrupt a rally held by the Black community to protest the freeing of two white men accused of dragging a Black man to death.

Associated Press video: Groups traded shouts of “black power” and “white power” on the streets of Paris, Texas. Troopers moved in to keep apart black separatists and white supremacists during protests over the handling of the dragging death of a black man last year (AP’s caption).