Excerpts from Frederick Douglass’ Independence Day address on July 5, 1852, in Rochester, New York, at an event commemorating the signing of the Declaration of Independence: 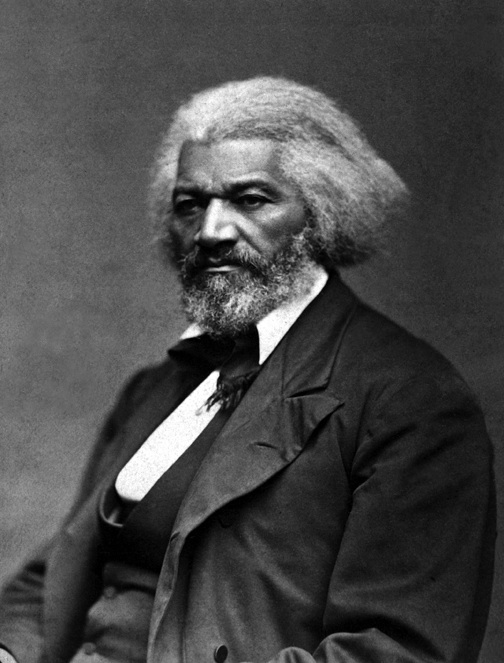 Fellow citizens, pardon me, allow me to ask, why am I called upon to speak here today? What have those I represent, to do with your national independence? Are the great principles of political freedom and of natural justice, embodied in that Declaration of Independence, extended to us? And am I, therefore, called upon to bring our humble offering to the national altar, and to confess the benefits and express devout gratitude for the blessings resulting from your independence to us?

Would to God, both for your sakes and ours, that an affirmative answer could be truthfully returned to these questions. Then would my task be light and my burden easy and delightful. For who is there so cold, that a nation’s sympathy could not warm him? Who so obdurate and dead to the claims of gratitude, that would not thankfully acknowledge such priceless benefits? Who so stolid and selfish, that would not give his voice to swell the hallelujahs of a nation’s jubilee, when the chains of servitude had been torn from his limbs. I am not that man. In a case like that, the dumb might eloquently speak, and the “lame man leap as an hart.”

But such is not the state of the case. I say it with a sad sense of the disparity between us. I am not included within the pale of this glorious anniversary! Your high independence only reveals the immeasurable distance between us. The blessings in which you, this day, rejoice are not enjoyed in common. You share the rich inheritance of justice, liberty, prosperity and independence, bequeathed by your fathers, not by me. The sunlight that brought light and healing to you has brought stripes and death to me.

This Fourth of July is yours, not mine. You may rejoice, I must mourn. To drag a man in fetters into the grand illuminated temple of liberty, and call upon him to join you in joyous anthems, were inhumane mockery and sacrilegious irony. Do you mean, citizens, to mock me, by asking me to speak to-day? If so, there is a parallel in your conduct. And let me warn you that it is dangerous to copy the example of a nation whose crimes, towering up to heaven, were thrown down by the breath of the Almighty, burying that nation in irrevocable ruin! I can today take up the plaintive lament of a peeled and woe-smitten people!

Would you have me argue that man is entitled to liberty? That he is the rightful owner of his own body? You have already declared it. Must I argue the wrongfulness of slavery? Is that a question for Republicans? Is it to be settled by the rules of logic and argumentation, as a matter beset with difficulty, involving a doubtful application of the principle of justice, hard to be understood? How should I look today, in the presence of Americans, dividing and subdividing a discourse, to show that men have a natural right to freedom, speaking of it relatively and positively, negatively and affirmatively? To do so, would be to make myself ridiculous, and to offer an insult to your understanding. There is not a man beneath the canopy of heaven who does not know that slavery is wrong for him.

What, am I to argue that it is wrong to make men brutes, to rob them of their liberty, to work them without wages, to keep them ignorant of their relations to their fellow men, to beat them with sticks, to flay their flesh with the lash, to load their limbs with irons, to hunt them with dogs, to sell them at auction, to sunder their families, to knock out their teeth, to burn their flesh, to starve them into obedience and submission to their masters? Must I argue that a system thus marked with blood, stained with pollution, is wrong? No! I will not. I have better employment for my time and strength than such arguments would imply.

What then remains to be argued? Is it that slavery is not divine; that God did not establish it; that our doctors of divinity are mistaken? There is blasphemy in the thought. That which is inhuman, cannot be divine! Who can reason on such a proposition? They that can, may; I cannot. The time for such argument is past.

What, to the American slave, is your Fourth of July? I answer; a day that reveals to him, more than all other days of the year, the gross injustice and cruelty to which he is the constant victim.

To him, your celebration is a sham; your boasted liberty, an unholy license; your national greatness, swelling vanity; your sounds of rejoicing are empty and heartless; your denunciation of tyrants, brass fronted impudence; your shouts of liberty and equality, hollow mockery; your prayers and hymns, your sermons and thanksgivings, with all your religious parade and solemnity, are, to him mere bombast, fraud, deception, impiety, and hypocrisy – a thin veil to cover up crimes which would disgrace a nation of savages. There is not a nation on the earth guilty of practices more shocking and bloody than are the people of the United States, at this very hour.

Go where you may, search where you will, roam through all the monarchies and despotisms of the Old World, travel through South America, search out every abuse, and when you have found the last, lay your facts by the side of the every-day practices of this nation, and you will say with me, that, for revolting barbarity and shameless hypocrisy, America reigns without rival …

America is false to the past, false to the present, and solemnly binds herself to be false to the future. Standing with God and the crushed and bleeding slave on this occasion, I will, in the name of humanity which is outraged, in the name of liberty which is fettered, in the name of the Constitution and the Bible, which are disregarded and trampled upon, dare to call in question and to denounce, with all the emphasis I can command, everything that serves to perpetuate slavery – the great sin and shame of America! “I will not equivocate; I will not excuse;” I will use the severest language I can command; and yet not one word shall escape me that any man, whose judgment is not blinded by prejudice, or who is not at heart a slaveholder, shall not confess to be right and just.

“There is not a nation on the earth guilty of practices more shocking and bloody than are the people of the United States, at this very hour.”

These excerpts from Frederick Douglass’ July 5, 1852, speech were selected for the book “Negro Orators and Their Orations” (Washington, 1925), edited by Carter G. Woodson, founder of what is now known as Black History Month. Frederick Douglass (1818-1895), the Great Abolitionist, escaped slavery at 18 and helped others escape via the Underground Railroad, began public speaking at 23, wrote his must-read autobiography, “Narrative of the Life of Frederick Douglass, an American Slave,” at 27 and at 29 founded The North Star, the most influential newspaper in the movement to abolish slavery, using the motto, “Right is of no Sex – Truth is of no Color – God is the Father of us all, and we are all brethren.” After the Civil War, he continued to fight for the rights of Blacks and of women and in 1889 was appointed U.S. minister to Haiti.

The first Fourth of July

The Continental Congress made some changes to Thomas Jefferson’s draft of the Declaration on Independence on July 3 and July 4, 1776, when it was finalized. Jefferson wrote this comment that night about one of the changes: “The clause too, reprobating the enslaving the inhabitants of Africa, was struck out in compliance to South Carolina and Georgia, who had never attempted to restrain the importation of slaves, and who on the contrary still wished to continue it. Our Northern brethren also I believe felt a little tender under these censures; for tho’ their people have very few slaves themselves, yet they had been pretty considerable carriers of them to others.”

Are you a potential terrorist under NDAA?

No justice, no food, no 4th of July celebration