“Among these large bodies, the little community of Haiti, anchored in the Caribbean Sea, has had her mission in the world, and a mission which the world had much need to learn. She has taught the world the danger of slavery and the value of liberty. In this respect she has been the greatest of all our modern teachers.” – Hon. Frederick Douglass, former U.S. Minister to Haiti, from his “Lecture on Haiti” delivered Jan. 2, 1893, at Quinn Chapel, Chicago 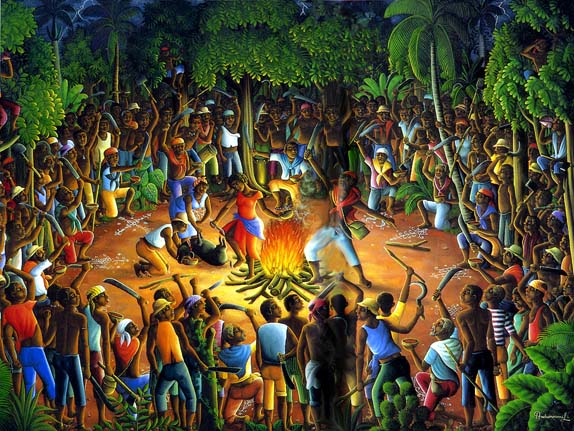 It was a sweaty, steaming night in August, when a group of African captives gathered in the forests of Marne Rouge, in Le Cap, San Domingue. It was August 1791.

Among these men was a Voudon priest, Papaloi Boukman, who preached to his brethren about the need for revolution against the cruel slavedrivers and torturers who made the lives of the African captives a living hell. His words, spoken in the common tongue of Kreyol, would echo down the annals of history and cannot fail but move us today, 213 years later:

“The god who created the sun which gives us light, who rouses the waves and rules the storm, though hidden in the clouds, he watches us. He sees all that the white man does. The god of the white man inspires him with crime, but our god calls upon us to do good works. Our god, who is good to us, orders us to revenge our wrongs. He will direct our arms and aid us. Throw away the symbol of the god of the whites, who has so often caused us to weep, and listen to the voice of liberty, which speaks in the hearts of us all.”

The Rebellion of August 1791 would eventually ripen into the full-fledged Haitian Revolution, lead to the liberation of the African Haitian people, to the establishment of the Haiti Republic, and the end of the dreams of Napoleon for a French-American Empire in the West.

Two centuries before the Revolution, when the island was called Santo Domingo by the Spanish Empire, historian Antonio de Herrera would say of the place, “There are so many Negroes in this island, as a result of the sugar factories, that the land seems an effigy or an image of Ethiopia itself,” quoted by Dr. Paul Farmer on page 61 of his 1994 book, “The Uses of Haiti.”

Haiti was the principal source of wealth for the French bourgeoisie. In the decade before the Boukman Rebellion, an estimated 29,000 African captives were imported to the island annually.

Conditions were so brutal and the work was so back-breaking that the average African survived only seven years in the horrific sugar factories.

In 1804, Haiti declared independence, after defeating what was the most powerful army of the day: the Grand Army of France.

Haiti’s Founding Father, Jean-Jacques Dessalines, at the Haitian Declaration of Independence, proclaimed, “I have given the French cannibals blood for blood. I have avenged America.”

With their liberation, Haitians changed history, for among their accomplishments:

a) Haiti was the first independent nation in Latin America;

b) It became the second independent nation in the Western hemisphere;

c) It was the first Black republic in the modern world;

d) It was the only incidence in world history of an enslaved people breaking their chains and defeating a powerful colonial force using military might.

What did “independence” bring? It brought the enmity and anger of the Americans, who refused to recognize their southern neighbor for 58 years. In the words of South Carolina Sen. Robert Hayne, also quoted by Dr. Farmer, on page 79, the reasons for U.S. non-recognition were clear: “Our policy with regard to Hayti is plain. We never can acknowledge her independence … The peace and safety of a large portion of our Union forbids us even to discuss (it).”

In many ways, Black August, at least in the West, begins in Haiti. It is the Blackest August possible — revolution and resultant liberation from bondage. For many years, Haiti tried to pass the torch of liberty to all of her neighbors, providing support for Simon Bolivar in his nationalist movements against Spain.

Indeed, from its earliest days, Haiti was declared an asylum for escaped slaves, and a place of refuge for any person of African or American Indian descent.

On Jan. 1, 1804, President Dessalines would proclaim: “Never again shall colonist or European set foot on this soil as master or landowner. This shall henceforward be the foundation of our Constitution.”

It would be U.S., not European, imperialism that would consign the Haitian people to the cruel reign of dictators. The U.S. would occupy Haiti and impose its own rules and dictates. After its long and hated occupation, Haitian anthropologist Ralph Trouillot would say, it “improved nothing and complicated almost everything.”

Yet, that imperial occupation does not wipe out the historical accomplishments of Haiti.

During the darkest nights of American bondage, millions of Africans, in America, in Brazil, in Cuba and beyond could look to Haiti and dream.

Ezili Dantò performs Bwa Kayiman, the Vodun gathering on Aug. 14, 1791, that started the successful Haitian revolution, abolished slavery and colonialism and created the nation of Haiti. Written by Ezili Dantò and performed here with Troupe Makandal and master Haitian drummer, Frisner Augustin. For more on Ezili Dantò, go to http://www.ezilidanto.com/.

Ezili Danto performs pieces from her one-woman Vodun Jazzoetry show, “Red, Black & Moonlight.” This 45-minute May 2008 presentation in Miami included RBM performance pieces: “So Much Like Here,” “Breaking Sea Chains,” “Haitian Nights” and “Anba Dlo, Lan Ginen.” To read the text of these pieces or to book a show, go to http://www.ezilidanto.com.