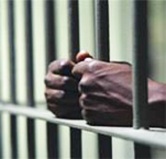 Here at the Bay View, we’ve been debating how to best commemorate Black August and celebrate George Jackson this year. Prisoners around the country often ask us for stories about them, and we have more stories than space to publish them.

But some California prisoners have written to say that reading anything by or about George Jackson has become grounds for validation as a member of a prison gang. Here’s how Edward Furnace, H-33245, Corcoran SP SHU, 4B-4R-31, P.O. Box 3481, Corcoran CA 93212-3481, put it:

“What the CDCR is doing is targeting people who are socially and politically conscious – validating Black prisoners with insufficient evidence and not following their own rules. Pretty much anyone who reads anything concerning George Jackson and/or movements of the ‘60s and early ‘70s, they’re validating them. The process is supposed to be about illegal prison gang activity on behalf of or in furtherance of the gang.

“The CDCR considers reading any George Jackson books as gang activity. The dragon on the back page of the Aug. 17, 2005, (Bay View) paper under the heading ‘The Original Black August’ was used as a validation point against me. Never mind that the events were taking place in society and not in prison.

“This practice is specifically aimed at Black male prisoners because prisoners from other cultures can study George Jackson and have dragons tattooed on their bodies but are not targeted for validation. … Punishing a prisoner for reading a book or newspaper is certainly indicative of the CDCR making an attempt to keep men in a backward state of mind. …

“I just received an answer to my validation petition from the Superior Court. They denied it, so now I’ll be taking an appeal. I really think your paper may be able to bring a suit against the CDCR. You’d probably have to run a column in your paper asking prisoners to write in if articles out of your paper were used as validation points against them. If it’s been used against a lot of people the way it was on me, you may have a legitimate claim.”

Though we don’t want to be responsible for sending anyone to the SHU, neither do we want to sacrifice our rights nor the rights of our readers in prison to free speech. Censoring ourselves by avoiding any mention of Black August or George Jackson in the Bay View would amount to sacrificing our history and our heroes. We can’t do that.

Upon consulting with former prisoners and prison activists, we learned that the law is on our side. According to the website of the law firm Lieff Cabraser Heimann & Bernstein, these are the terms of the 2004 Castillo settlement:

Disclosure of the evidence used to indefinitely confine prisoners to solitary confinement or the super maximum security units;

Providing an opportunity for prisoners to refute the evidence relied upon to label them as members or associates of prison gangs;

Implementing significant changes to the evidence required to label prisoners as gang members, requiring prison officials to articulate and document why considered evidence is indicative of illegal gang activity;

Disallowing the reliance on confidential sources to place prisoners in solitary confinement without proof of participation in illegal gang activity;

Improved training of prison staff in identification of prison gang members; and

Incorporation of these changes into state law – Title 15 of the Code of Regulations or in the Department of Corrections Operations Manual.”

Studying the history contained in the commemoration of Black August and the wisdom of George Jackson is in no way “gang activity.” People earn PhDs for such scholarship. And therefore, we will heed Edward Furnace’s advice and invite our readers behind enemy lines “to write in if articles out of (y)our paper were used as validation points against them.”

“Many amongst us may remember my story: In late 2006, I was living in Sonoma County with my wife at that time, promoting Education Not Incarceration out of Oakland. My parole was revoked and, while at San Quentin State Prison, I was validated as a ‘BGF,’ Black Guerrilla Family member.

“I send this letter as a wake-up call to enlighten the people that within these walls of CDC, a massive depopulation policy has been enacted that is designed to remove hundreds of Blacks from general population to CDC SHU housing. The Department of Corrections has been filling the SHU facilities with Blacks under the pretext of being members of a prison gang.

“These New Afrikans are being targeted for possessing or reading literature such as George Jackson’s ‘Blood in My Eye’ or ‘Soledad Brother’ or about the Revolutionary Communist Party, Mao, Marxism-Leninism, Black August, Juneteenth and even Black History Month – i.e., CDC has targeted every element of promoting Black consciousness as ‘gang activity,’ thereby giving many New Afrikans an indeterminate SHU sentence in solitary confinement for their entire prison sentence regardless of whether they have any gang violence in their record.

“Our people must stay mindful, as the repressiveness within these walls goes unchecked. … When law enforcement can violate human rights with impunity, no one is protected but those with an invested interest in those violations. …

“We must choose between freedom and fear. We cannot have both.”