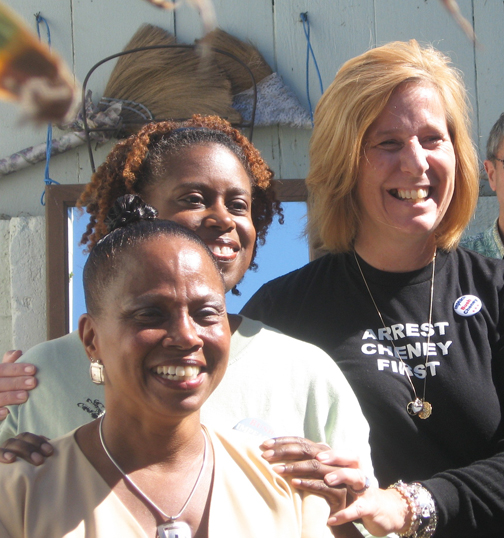 I remember back in the good ol’ days of 2005 and 2006 when being against the wars was not only politically correct, but it was very popular. I remember receiving dozens of awards, uncountable accolades and was even nominated for the Nobel Peace Prize.

Those were the halcyon days of the anti-war movement before the Democrats took over the government – off of the backs of the anti-war movement – and it became anathema to be against the wars and I became unpopular on all sides. I guess at that point, I could have gone with the flow and pretended to support the violence so I could remain popular, but I think I have to fiercely hold on to my core values whether I am “liked” or not.

Killing is wrong no matter if it is state-sanctioned murder or otherwise. Period. Not too much more to say on that subject, except what I quote above from Dr. King.

However, while the so-called left is obsessed over supporting a very crappy Democratic health care plan, people in far away countries are being deprived of their health and very lives by the Obama regime’s continuation of Bush’s ruinous foreign policy.

I was never dismayed when the so-called right attacked me and called me names for protesting Bush. However, something inside me gets a little sick when I hear people who claim to be peace activists supporting the Obama administration’s foreign policy, a policy that is not like Bush’s in the fact that it’s much worse.

I have been called a “racist” from the so-called left. In these people’s opinion, I was totally justified in protesting Bush, but I am a racist for protesting the same policies under Obama. When I opposed Bush’s policies, I was called traitor, anti-American, anti-Semitic and other names I cannot print. Name-calling is a great way to shut down critical thinking and discussion. And, not to mention, I think the murder of innocent life in the Iraq-Af-Pak regions is racist and morally corrupt.

There are many people in this country who oppose Obama because they’re racist, but I am not one of them. I oppose Obama’s policies because they are wrong … again, period!

One cannot obfuscate when innocent lives are being destroyed, here and abroad. We cannot allow “political reality” to get in the way of morality. Human sacrifice is not worth the political reality. Violence, killing, war and more war are NEVER the solution to any problem. Period.

If Obama has violent shadow forces around him pulling him in the direction of violence, which begets more violence and more resistance, then we, especially people in the peace or anti-war movements need to gather and organize to pull him in the direction towards peaceful conflict resolution and solutions that aren’t based on exploiting people’s fears, anxieties or ignorance.

I am going to Martha’s Vineyard because we have the moral high ground. The war supporters aren’t going to protest Obama’s wars. They are strangely silent over his foreign policy, unless they are praising it.

I am going to Martha’s Vineyard because someone has to speak for the babies of Iraq, Afghanistan and Pakistan that do not deserve the horrible fate that has been handed to them by the U.S. Military Industrial Complex. The voiceless need a voice, and even if I am called every name in the book by all sides, I will speak up for them.

I am going to Martha’s Vineyard because so many people have been blinded to the fact that the system has momentum that rolls on and over and around no matter who is the titular head of the system.

Let’s just pretend that elections are fair in this country and my candidate, Cynthia McKinney, won for president. If she wasn’t able to rein in the systemic violence, then I would be going wherever she vacationed to protest her policies, too. I guess at that point, I would not only be called “racist,” but I would be called a “self-hating female.”

In a recent conversation, someone was trying to convince me that I should not be so stridently opposed to Obama’s policies and I responded that today 75 people were killed and 300 people were wounded in a bomb blast in Iraq and 26 mostly women and children were killed in a wedding party in Afghanistan this week and she said: “Oh, that wouldn’t be acceptable if it happened here.”

And that’s the problem: It’s not acceptable if it happens anywhere, to anybody, no matter who is president of the USA.

Not only is the death toll mounting for innocent civilians but also is once again climbing for our troops.

While the “festivities” are occurring on Martha’s Vineyard next week, there are families all over the world who will never again be able to fully feel festive. Ahhhh … everyone should just stand down, relax and sip an Obamarita on the beach … Hope reigns once again in The Empire.

And, yes, we are going to Martha’s Vineyard to get attention. We vehemently want to call attention to all of the points I have made above.

Even though there is a small anti-war, peace movement in this country, there still is one and this movement has the moral high ground and punditry, personal attacks, glitzy marketing, or “political realities” won’t drown us out.

Members of Dr. King’s own caucus tried to convince him not to publicly speak out against the Vietnam War, and that’s when he delivered his brilliant “Beyond Vietnam” speech at the Riverside Church in NYC exactly one year before he was assassinated. That speech was in response to the critics. Dr. King took the moral high ground when he said: “There comes a time when silence is betrayal.”

That time has now come, once again. By our silence we are betraying humanity.

Love the president or hate him, or anywhere in between, but we must speak out loudly and without any timidity against the institutional violence of the U.S. Empire.

We have the moral high ground