by Mutulu Olugbala, aka M1 of dead prez 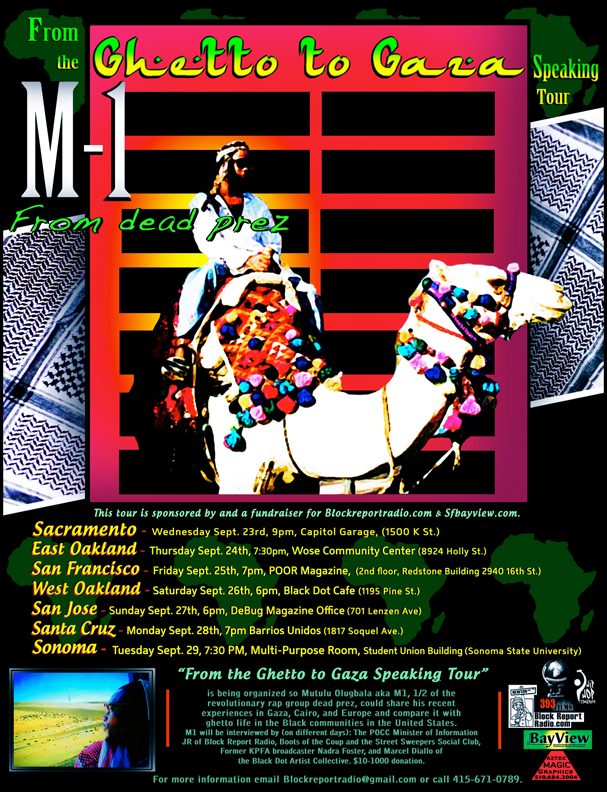 You may have heard me say, “I work for the people; the streets are my office.” Well, my recent mission to Palestine was a testament to that statement. Through the Existence is Resistance organization, I bore witness to a very moving and eye-opening experience. As a man-at-arms in an African Liberation Movement in the U.S. which is currently in the process of re-organizing and re-inventing itself in these times, I see the role of international solidarity critically important to our future world view. So when asked, “Why are you all the way over there when there is a war going on in your own community?” I proudly quote dead prez’ “Psychology” (“Let’s Get Free,” 2000): “My enemy’s enemy is my man!”

With respect to all the progressive organizations and cultural workers who have been putting work in to stop the siege on Palestine and amass resources and resistance to the same imperialism which is plaguing my community, I say, “Asante sana!” (“Thank you very much!”) You have provided critical political education at a time when the hip-hop community in particular has been devoid of analysis of the world around us. In places like Chicago and New York, I would continually bump into artists like Rebel Diaz, Shadia, Mansour, DAM (Palestine) and Immortal Technique, who I’d like to report as courageous fighters!

Now that we have kicked the preliminaries (as the old Flavor Flav would say), let’s get to the details … Moments after we rocked a solar-powered event on 23rd and the FDR in Manhattan promoting our recent release, “Pulse of the People,” I jumped on a plane to Cairo, Egypt. The plan was to join a caravan that would originate there and move north to the border of Gaza with loads of resources which had been donated for the people there who had been under an Israeli imposed, U.S. backed embargo for months.

From my trips to Cuba in the past years, I was aware that an embargo is only a nice way to say war, so I knew what to expect. Upon arrival in Egypt – which is northern Africa, in case you forgot – I could feel the intense military repression in the air. Nonetheless I was awed by finally touching and seeing a place that held such importance in the history of civilization. Fuck colonized Egypt; to me this was Kimet!

As I was toured through the recent developments and structural work like the Anwar Sadat Memorial and felt the pulse of the cluttered city streets, I was awed by the backdrop of the Nile River, which had been dirtied by the recent Arab neglect. Unfortunately, it was like a “toy” tag on a “burner,” for all my graf writers out there. Nonetheless, it was a moment I will never forget.

As my new-found comrades Ayman, Mazzi and I toured through Egypt just an hour off the plane, we could not help but to be drawn to the pyramids in the near distance as the sun began to set on this powerful land. In a moment of spontaneity, we urged our guide to take us closer to get a better look at these incredible wonders of the world.

As the sun continued to set, I found myself on the back of a camel, trodding through what seemed like the Kasbah on our way to the sands of the desert in which these six pyramids were implanted. Unfortunately, night fell upon us as we were on the way and we had to turn back, but our efforts produced a great memory and a backdrop which was indescribable.

Later we arrived at the hotel, which would serve as the headquarters for the caravan, war-room for the organizers and hostage zone for the Egyptian government who had assigned agents to follow and document every word and action taken by the Viva Palestina group, whose numbers would reach around 200 people. As we settled in, there was an update meeting called for the people who had just arrived.

It was at that meeting that we learned that the preliminary caravan, which had been sent forward to prepare for our entry into Palestine, had been turned back by armed soldiers at the Suez Canal! It was at that moment that we realized there would be serious worldwide opposition to this support which we planned to bring there.

At the center of the meeting was British Parliamentarian George Galloway, who was the chief planner and organizer of this mission. Seated to his left were two very familiar faces to me, New York City Councilman Charles Barron and Green Party presidential nominee Cynthia McKinney. I was elated to see these two, who I had worked with before on many occasions. 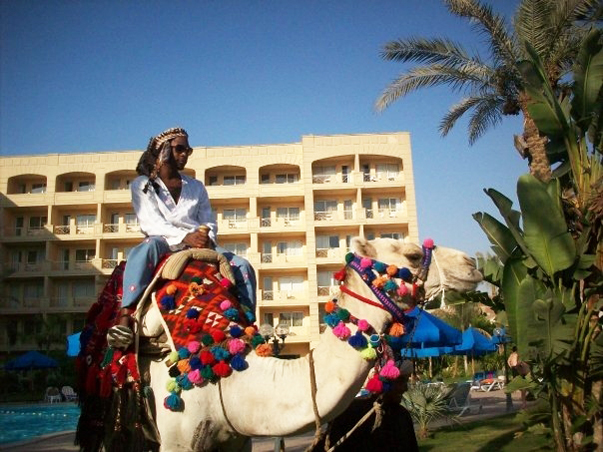 And I was especially anxious to speak with Cynthia McKinney, who had, just days before, been freed from an Israeli jail for attempting to get into Gaza to investigate the crimes against the people there. It was good to be amongst comrades in a sea of unfamiliar faces. Later I would retire my room with mc’s S.O.U.L. Purpose (U.S./Iran) and LowKey (Britain), only to break night preparing for the next day.

Little did we know that the Egyptian government had no plans to let this mission succeed. Under the watchful eye of the Israeli government, we endured countless exercises in futility at the U.S. Embassy while being followed by suspicious looking Arab agents carrying sub-machine guns.

The idea was to exhaust our resources by paying for useless, unnecessary documents and dealing with bureaucratic paperwork to delay the mission as much as possible. Plus, while waiting on the Egyptian government to deliberate these matters, which they had been made aware of months prior, we were not allowed to leave the vicinity of the hotel, which we were paying to be held hostage in!!

Was this the same place that U.S. President Barak Obama recently visited in a so-called attempt to ease relations precisely in this region? Is this a glaring example of political lip-service or what? The Viva Palestina group spent the next couple of restless days plotting, planning and strategizing around how we could heighten the pressure to free us from this Egyptian purgatory.

There were international demonstrations called in the U.S. and Britain in which people stampeded the embassies and flooded officials with phone calls. In the final analysis, even with all the efforts, we were still left with undesirable choices to make.

With some forces who had been in Egypt for up to seven days already with no success at breaking the siege on Gaza, we were now faced with the fact that the Egyptian government would not allow the resources we had gathered to bring into Gaza to cross the border. I am talking hundreds of thousands of dollars and pounds literally “jacked” from us! 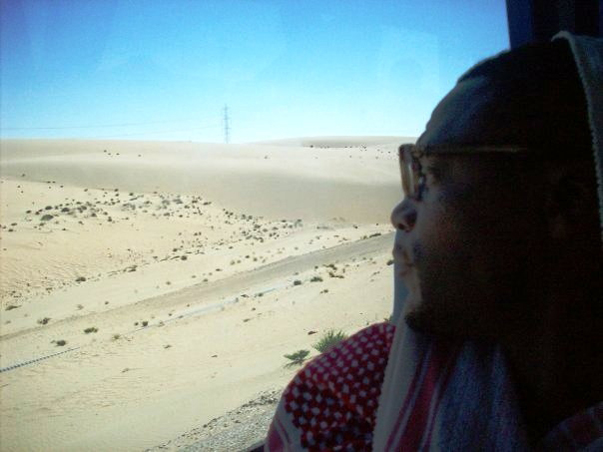 Some of these resources were in the form of two ambulances, many trucks full of food, medicine, wheelchairs and equipment, basic household needs, children’s books and school supplies and the list goes on and on! On top of that, we were now reduced from spending three days in Gaza to now only being given 24 hours to get in and out! It was pretty ridiculous if you can fathom it; however, in war we have to make decisions on our feet and move strategically.

With the leadership shift from Galloway to Charles Barron in the heated hours, and around-the-clock negotiations, it all came down to a final decision-making meeting in which all cards were placed on the table before everyone in the Viva Palestina caravan. In a room full of people from every walk of life: white, Black, Asian, Palestinian, Jew, rich, poor, political, non-political, uninformed, young , old, tired, adventurous and of course police planted agents, we had a discourse of which type I had never been a part of. And I am thankful for the seasoned leadership of Mr. Barron that helped to pull us through. At one point, there was even the “discovery” of an agent in that very meeting, which caused a huge conflagration that almost ended in physical harm to the snitch!

Our decision was to accept the offer made to us by the Egyptian government and bring some sense of hope to the Palestinian people who would be waiting on the other side of the Rafah border. And in the wee hours of the morning, we loaded up the vans and trucks with our people and our belongings and left the hostage hotel to embark on a six- to eight-hour caravan to the Gaza Strip.

The journey through the sand was remarkable. Only the pictures can describe these moments. On a comfortable chartered bus I daydreamed and listened to one the head organizers, Nancy, deejay to our anxiety and excitement. One of my favorite songs is the one that demanded us to “wave our kufiyas in the air!” which many of us wore. Even though they have become a passing fashion statement, we wore the red and white ones, and I felt extremely proud when the brothers got together to wave our Red, Black and Green Liberation flag in the immigration office as they chanted loud enough for the people to hear us on the other side in Gaza.

One thing I will never forget is the Palestinian people on the Egyptian side of the border who were not allowed to get back into their country since the embargo began. I felt unworthy of passing through the checkpoint as tears rolled down their faces and their children pleaded to be on the bus with us. I would have given up my seat in one second if it would not have compromised the mission.

As we endured a couple more hours of bureaucracy and finally made it to Palestinian land, many of us could not believe we were actually in the Gaza Strip. There was the warmest welcome planned even though they had prepared for this moment over a week ago. Who knows when their Israeli captors will allow the border to open again?

For all intents and purposes, we were visiting an open-air prison that is intended to never be given its human rights ever again! During the press conference and the hubbub, I saw many reactions to our arrival. There were families reunited and political opportunism ran amuck. Many of us were exhausted but elated to inhale the experience to the fullest. The next 24 hours would change my life …

Stay tuned for the finale …. Power to the People!

[Author’s note: The views I am expressing here are mine alone, and subject to input from all certain people who shared this experience. Please excuse any error in my recollection; it wasn’t done intentionally. Thank you.]

Learn more about M1 and dead prez and their latest album, “Pulse of the People,” at www.deadprez.com and www.myspace.com/m1rbg. Join M-1 on his historic speaking tour Sept. 23-29, “From the Ghetto to Gaza” – seven events in seven days in East and West Oakland, San Francisco, Sonoma, San Jose and Santa Cruz to benefit BlockReportRadio.com and SFBayView.com. Contact Minister of Information JR at blockreportradio@gmail.com or the SF Bay View at (415) 671-0789 for more information.

What would you expect a conversation between a cartoonist and a rapper to sound like? Get ready for a gripping exchange between two politically savvy intellectuals, famous cartoonist Khalil Bendib (Bendib.com) and Mutulu Olugbala, aka M1 (deadprez.com). The interview begins 36:20 minutes into the show.